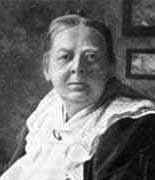 Mary Everest was the daughter of Reverend Thomas Roupell Everest (1800-1855), Rector of Wickwar, and Mary Ryall (born 1815). Thomas Everest had one brother, George Everest (1790-1866), who was the surveyor and geographer after whom Mount Everest was named. Mary Ryall had a brother John Ryall who became Vice President and Professor of Greek at Queen's College, Cork. After Mary Everest married George Boole she became known as Mary Everest Boole. For simplicity, we shall refer to her as Mary Boole throughout this biography. She had a brother, George John Everest (1835-1908) who became vicar of Teynham in Kent.

Thomas Everest studied at Pembroke College, Cambridge and was ordained in 1826. He was a priest at Bristol Cathedral before becoming rector of Wickwar, near Chipping Sodbury in Gloucestershire, in 1830. On 27 September 1830 he married Mary Ryall; their daughter Mary (the subject of this biography) was born in 1832 and their son George in 1835. In 1837 an influenza epidemic swept through England leaving Thomas Everest as an invalid. Being a strong believer in homeopathy, he went with his family to Poissy, near Paris, in France in 1837 to be treated by Samuel Hahnemann, the founder of the homoeopathic system of medicine, leaving his curate in charge of the church at Wickwar. Mary Boole was at this time five years old but she had to follow the same routine as Hahnemann devised for the whole family (including their servants) [9]:-

While in France, Mary Boole became bilingual in French and English. In fact, in later life she considered French her native tongue. She attended school as well as being tutored by a governess. Her mother also gave her lessons which she later described as "hopelessly dreary." Later, while still in France, she was tutored by a Monsieur Deplace. She later wrote:-

Monsieur Deplace is the hero of my idyll. I wish, though I know that the wish is vain, that I could convey any adequate impression of the way in which he enveloped my life with a protecting influence without the slightest interference with either my thoughts or my feelings.

One lesson Mary writes about is her problem in arithmetic with the "double rule of three." Deplace told her nothing at the beginning, but he asked her a succession of questions. She was to write down each answer, as he asked the question. Then he asked her to analyse his questions and to review her answers to his questions. In this way, step by step, she perceived the answer to her complicated problem. Mary writes that Deplace was educated in the French school of mathematics.

At age ten, when still in France, Mary Boole heard her father speaking with a friend who was visiting from England. The friend spoke about the University of Cambridge being a great centre for mathematics and spoke, in particular, about Charles Babbage. After the friend left Mary heard her father talking to her mother saying he did not know what he would do with his children since his son lacked interest in education as he would expect of a girl, but his daughter had the educational interests and abilities he would expect of a boy. "If only she could go to Cambridge and study mathematics she would carry everything before her," he said, "but what could a girl do learning mathematics." Mary was shocked to learn that she could not go to university, she could not study mathematics and she would never meet the famous Charles Babbage.

A year later the family were back in England. Mary Boole could not go to university but she could learn mathematics by teaching herself from books. She met many of her father's friends and these included John Herschel and Charles Babbage. This provided her with further motivation to read mathematics books. She attended school for a short time but soon was taken out of education to become an assistant to her father. She had some practical teaching experience taking the Sunday School class as well as writing experience helping her father with his sermons.

In December 1843 Mary Boole's uncle, George Everest, returned from India. He had undertaken much work there for the Great Trigonometrical Survey and was knowledgeable about mathematics. He also had many fascinating tales to tell of his travels in India while carrying out the surveys. George Everest spent many hours with Mary, encouraging her and telling her about his experiences. George Everest enjoyed his discussions with Mary so much that at one time he even asked her father if he could not adopt her, but this was not what her parents wanted.

... during a visit to her uncle John Ryall, then vice-president of the college. While their opinions on certain matters were markedly divergent, in many respects it must have seemed that each had found a complementary partner in the other. Mutual interests in spirituality and mathematics figured prominently in their courtship as well as in their later life together. Indeed, their relationship evolved partly as a consequence of time they spent together devoted to Mary's private tuition, George proving particularly helpful to overcoming her various difficulties with differential calculus.

When Mary met George Boole she was eighteen years old and he was thirty-five. For two years after they met they corresponded frequently, much of the letters being about mathematics and science. In 1852 George Boole visited the Everest family home in Wickwar and at this time he became more formally her mathematics tutor. The two continued to correspond about mathematics, but it is clear that they had developed a close friendship despite the fact that they were living far apart.

On 15 June 1855 Mary's father died leaving her without means of support and George Boole proposed marriage. After a short engagement, they married on 11 September 1855 at a small ceremony in Wickwar. The lived at first in Sundays Well Road, Cork, then in Castle Road, Blackrock, Cork, before moving to Litchfield Cottage, Ballintemple, Cork. It proved a very happy marriage with five daughters: Mary Ellen Boole born in 1856, Margaret Boole born in 1858, Alicia Boole (later Alicia Boole Stott) born in 1860, Lucy Everest Boole born in 1862, and Ethel Lilian Boole born in 1864. George Boole died on 8 December 1864 with his daughter Ethel Lilian less than seven months old; she had been born on 11 May 1864. Mary Boole was only 32 years old, having five young daughters and no means of support.

Mary Boole moved back to England where, thanks to Frederick Denison Maurice, she was offered the position as a librarian at Queen's College, London. She lived at 43 Harley Street, London, and it is from that address that she wrote to Charles Darwin in December 1866. For their correspondence, see THIS LINK.

For information on the Boole children after their return to England, see THIS LINK.

While working as a librarian at Queen's College, London, Mary had given a [2]:-

... series of talks to a group of London mothers who, finding their religion threatened by Darwin's new theories, sought Mrs Boole's philosophic wisdom.

These talks, Mary used as the basis for her book The message of psychic science to mothers and nurses which she completed in 1868 but it was only published in 1883. It is claimed that she did not publish after it was written because, having shown it to F D Maurice, he was so displeased with it that he persuaded her not to publish it and had her dismissed from her position at Queen's College. She then lived with her unmarried uncle Robert Everest in Sunninghill, Berkshire; she is there at the time of the 1871 census but at this time her children are not living with her since they remained in Harley Street, London. Mary's occupation is given as "Teacher of Mathematics". Shortly after this she worked as James Hinton's secretary.

James Hinton (1822-1875) was a talented surgeon who, as well as writing on his medical specialities, wrote on ethical subjects and on 'thinking'. Mary Boole described Hinton as a 'thought-artist'. She wrote that [4]:-

For the thought-artist no opinion is right or is wrong. The all-important thing is the conduct of the thinking-machinery.

Boole ... insisted on Hinton's writings as somehow not really writing, but pure thinking. Whatever it was about, Boole insisted, "the motif was always the same - the Rhythm of Thought."

James Hinton died on 16 December 1875 and after this time Mary Boole began publishing books and articles. Let us note that Mary Boole's daughter Mary Ellen Boole married James Hinton's son Charles Howard Hinton (1853-1907) in 1880. Charles Howard Hinton was a mathematician who wrote "What is the Fourth Dimension?" but, after being convicted of bigamy Charles and Mary Ellen went to Japan and then to the United States.

... Mary began teaching, women initially and then children. She followed her tutor Monsieur Deplace's method with her own additions. She believed that children should be given mathematical objects to play with and develop, at their own pace, ideas of order and pattern. She invented curve stitching, or what we call today, string geometry, to help children learn about the geometry of angles and spaces. She was an outstanding teacher. One of Mary's pupils wrote to her saying: "I thought we were being amused not taught. But after I left I found you had given us a power. We can think for ourselves, and find out what we want to know." Mary believed that it was possible to express all basic notions of the universe with numbers and symbols. At the age of 50, she began writing a series of books and articles about this, publishing them regularly until the time of her death in 1916 aged 84.

Let us now look briefly at some of Mary Boole's publications. These include:
The message of psychic science to mothers and nurses mentioned above
Symbolic Methods of Study (K. Paul, Trench & Company, 1884);
Logic taught by love (Alfred Mudge & son, 1889);
Mathematical psychology of Gratry and Boole: Translated from the Language of the Higher Calculus Into that of Elementary Geometry (Swan Sonnenschein & Company, 1897);
Boole's Psychology as a Factor in Education (Benham & Company, 1902);
The cultivation of the mathematical imagination (Colchester, 1902);
Lectures on the Logic of Arithmetic (Clarendon Press, 1903);
The Preparation of the Child for Science (Clarendon Press, 1904);
Mistletoe and Olive. An Introduction for Children to the Life of Revelation, etc. [In Prose and Verse.] (London, 1908);
The Message of Psychic Science to the World (C. W. Daniel, 1908);
The Message of Psychic Science to Mothers and Nurses (C.W. Daniel, 1908);
Miss Education and Her Garden: A Short Summary of the Educational Blunders of Half a Century - dedicated (without Permission) to the Educational Authorities of Great Britain (C.W. Daniel, 1908);
Philosophy and Fun of Algebra (C. W. Daniel, 1909);
A Woodworker and a Tentmaker (C. W. Daniel, 1909);
Suggestions for Increasing Ethical Stability (C. W. Daniel, 1909);
Some Master Keys of the Science of Notation: A sequel to "Philosophy and Fun of Algebra" (C. W. Daniel, 1911);
The Forging of Passion Into Power (M. Kennerley, 1911);
What One might say to a Schoolboy (C. W. Daniel, 1921);
At the foot of the Cotswolds (C.W. Daniel, 1923);
The Psychologic Aspect of Imperialism: A Letter to Dr Bose (C.W. Daniel, 1931).
For quotes from some of these books, see THIS LINK.

Other pages about Mary Everest Boole:

Other websites about Mary Everest Boole: