Born
27 June 1767
Contamines, Haute-Savoie, France
Died
7 June 1843
Paris, France
Summary
Alexis Bouvard was a French astronomer who did the calculations which eventually led to the discovery of Neptune. 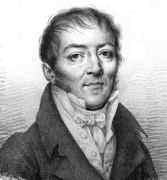 Alexis Bouvard came from a poor background, in fact he was born in a hut in the Alpine region south of Lake Geneva. As one might imagine this gave him a difficult start and it is hard to imagine how he managed to end up a respected scholar with a world-wide reputation given this beginning. There were few chances to obtain schooling so he had little education as a boy, growing up to learn the skills of being a shepherd boy in the hills. However in 1785, when aged 18, he went to live in Paris and received mathematics lessons so that he could earn his living as a computer. These days we think of a computer as a machine but at this time a computer was a person who carried out numerical calculations. Although he had little in the way of money to pay for an education, the Collège de France did offer free courses and Bouvard studied there. He became fascinated by astronomy after a visit to the Paris Observatory. He also realised that this was an area where his calculating skills could be particularly useful. He entered the Observatory as a student astronomer in 1793 and in 1795 was appointed as an astronomer.

In 1794 Bouvard met Laplace who was at that time working on his great masterpiece Méchanique céleste Ⓣ. Laplace recognised Bouvard's computing skills and soon had him carrying out the complex calculations required for his theory. Realising Bouvard's potential, Laplace arranged for him to be offered a position in the important Bureau de longitudes in 1794. Bouvard worked there for the rest of his career earning a reputation as a careful observer as well as an able mathematician. He supplied tables for the Annuaire (the French equivalent to the Nautical Almanac) over the many years he worked there. A completely different aspect of his work was annotating Caussin's translation of the work of the Islamic mathematician Ibn Yunus, known for his astronomical observations and for his many trigonometrical and astronomical tables.

As an observer Bouvard's skill is marked by the fact that he discovered eight comets, and his skill as a calculator is seen from his computation of their orbits. The first four comets he observed appeared in 1797, 1798, 1801 and 1805. After computing the orbit of one which was visible in 1818, he realised it was the same comet as he had observed (and computed its orbit) in 1805. This comet is now known as comet Encke. His work on lunar theory based on over 4000 observations he had made, was a remarkable achievement and earned him a prize from the Institut de France in 1800. He received other significant honours indicating the high esteem in which he was held by the international community, for example he was elected to the Academy of Sciences in 1803 and elected a fellow of the Royal Society of London in 1826.

One of his most significant contributions was his prediction of a planet beyond the orbit of Uranus. His first step in this process was his publication in 1808 of Tables astronomique Ⓣ - tables for the orbits of Jupiter and Saturn. When he published this work Uranus had only been studied for seven years from the time of its discovery in 1801. He wanted to include tables for Uranus in a new edition of the Tables he planned for 1821. By this time eleven records of the position of Uranus during ninety years before its discovery (of course without realising that the observation was of a planet) had been found. Since Uranus had an 84-year period, Bouvard attempted to find further pre-discovery records to improve the calculation of its orbit. Three of the pre-discovery records were due to Pierre Lemonnier, so Bouvard went through 15 folios of his old observations in an attempt to find further sightings. He found nine more records of sightings made between 1736 and 1780 giving him a total of 20 pre-discovery records. He also had at his disposal two fine series of post-discovery observations, one by the Paris observatory, the other by the Greenwich observatory.

Using all the data at his disposal, Bouvard produced a system of 77 equations but was unable to find a possible orbit for the planet from them. At first he assumed that there were errors in the pre-discovery data and, despite all the efforts he had made to obtain this pre-discovery data, he only used post-discovery data to compute his Tables. However this did not turn out to solve the problem since after a few years the planet was observed to be far from its predicted position. Bouvard believed this was due to another planet perturbing the orbit of Uranus but, although he asked an astronomer at the Paris Observatory to follow up the idea, nothing came of it since unfortunately for Bouvard the astronomer left soon after he made his request. Bouvard himself died before he could follow it up but his ideas formed the foundation of the work by Adams and Le Verrier. Their predicted position of a perturbing planet (later named Neptune) in 1846 led to its discovery three years after Bouvard's death. After its discovery it was realised that Neptune had accelerated the motion of Uranus up to 1821, then had retarded it after that. In fact if the positions of these two planets in their orbits had been markedly different from what it happened to be, it may have taken much longer for astronomers to realise that Uranus was being perturbed by another planet.

Alexander ends his biography [1] as follows:-

Brilliant but modest, Bouvard was an indefatigable calculator, and engaged in computation until the eve of his death. It could well be said of him that he ceased calculating only when he ceased living.

Cape Bouvard in Australia was named after him by French sailors when they discovered Western Australia.
Other Mathematicians born in France
A Poster of Alexis Bouvard

Other websites about Alexis Bouvard: