Born
5 June 1819
Lidcott, near Launceston, Cornwall, England
Died
21 January 1892
Cambridge, England
Summary
John Couch Adams was an astronomer and mathematician who was the first person to predict the position of a planet beyond Uranus. 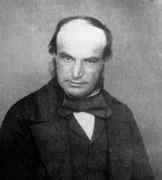 John Couch Adams's parents were Tabitha Knill Grylls and Thomas Adams. The family was a poor one with Thomas being a tenant farmer while Tabitha also came from a farming family. Thomas and Tabitha farmed near Launceston, Cornwall, and it was on Lidcott farm that John, the eldest of his parents seven children, was born. John Couch Adams was named after his mother's uncle, John Couch. It is particularly fitting that this should be the case since John Couch provided some education for Tabitha who inherited his library which included several astronomy books. It was this library, particularly the astronomy books in it, which fired John's interest as he grew up. Hutchins writes [3]:-

Adams was brought up in a close Wesleyan family and had his mother's good ear and love of music.

John attended the nearby village school at Laneast, where he studied Greek and algebra, until he was twelve years old when he went to a private school at Devonport run by his cousin the Revd John Couch Grylls. He also attended schools at Saltash and Landulph. At the Devonport school he continued his studies of classics, showed great mathematical ability and became known for his considerable abilities for accurate numerical calculations. It was during this period that he first became interested in astronomy and in 1835, while at Landulph, he observed Halley's comet. He worked out that an annular eclipse of the Sun would be visible in Lidcot in 1836, and he was there to make the observations. His mathematical skills were, however, self-taught for he learnt little of the topic at school. He would go to the Devonport Mechanics' Institute where he looked up articles on mathematics and astronomy.

Adams was educated at St John's College, Cambridge but this was only made possible by a number of fortuitous circumstances. His mother received a small inheritance in 1836, Adams earned money as a tutor in 1837, and he then won a scholarship to St John's College. These sources of money made a university education for him possible but financially difficult. He began his undergraduate mathematics course in October 1839 and graduated as Senior Wrangler (ranked top of the First Class) four years later having, rather remarkably, won the first prize in Greek testament every year. In the Mathematical Tripos examinations of 1843 he is said to have been awarded double the marks of the Second Wrangler which, if true, is an incredible achievement. Also in 1843 he became first Smith's Prizeman and he became a Fellow of St John's College. He did not spend all his time on research, however, for he tutored undergraduates so that he might earn money to send home to help with his brother's education. We should note that of his three brothers, Thomas Adams became a missionary, George Adams became a farmer, while William Grylls Adams became professor of natural philosophy and astronomy at King's College, London, and was elected a Fellow of the Royal Society.

On 3 July 1841, while still an undergraduate, Adams made a note that he had decided to investigate:-

... the irregularities of the motion of Uranus...in order to find out whether they may be attributed to the action of an undiscovered planet beyond it.

In September 1845 Adams gave accurate information on the position of the new planet to James Challis, director of the Cambridge Observatory. Challis gave Adams a letter of introduction to Airy, the Astronomer Royal at Greenwich. Adams twice called at Greenwich during October attempting to see Airy, but he had not made an appointment and was unsuccessful. He did leave the data giving his predicted position which Airy received and sent a letter to Adams with what he considered a vital question. Adams felt that Airy's question was trivial and so did not reply. Action was not taken by the Cambridge Observatory. Sampson writes [6]:-

Glaisher, in [9], reports that Adams said that he expected Airy would have:-

... communicated my results among his correspondents.

As professor in the University [Challis] should not have allowed a young Senior Wrangler, through modesty or diffidence or inexperience, to do such injustice to himself.

In November 1845 Adams was elected a Fellow of the Royal Astronomical Society, not on the strength of his predictions for the new planet which remained unknown, but rather for his paper Elements of the comet Faye in which, Challis reported:-

... [Adams] suggests that the comet may, perhaps, not have been moving long in its present orbit, and that, as in the case of the comet of 1770, we are indebted to the action of Jupiter for its present apparition.

Adams was lionized in his university, perceived as having the most imaginative English mathematical mind and power of calculation since Newton. He never uttered a word against Challis or Airy, and that reticence and his genial nature endeared him to many.

The Royal Astronomical Society was in a difficult position over Adams and Le Verrier. At its meeting on 14 November 1846, as well as communications from Airy and Challis explaining their actions regarding Adams' prediction, a paper from Adams was read entitled Explanation of the observed irregularities in the motion of Uranus. Sampson writes in [6]:-

There is not a phrase of complaint, bitterness, or regret. There is hardly a personal word at all. except one generous passage conceding the whole glory to Le Verrier.

Adams attended the meeting in person and is said to have [6]:-

His paper was published in January 1847. However following this the Royal Astronomical Society plunged itself into the impossible question of who should receive their Gold Medal. Their rules only allowed one medal to be awarded so after many arguments neither received a Gold Medal for the discovery of Neptune. Adams was, however, awarded the Gold Medal in 1866 for his work on the lunar perigee and acceleration.

In 1852 Adam's fellowship at St John's College ended so he effectively became unemployed although he continued his research. However in February 1853 he was elected to a fellowship at Pembroke College, Cambridge, and resumed teaching. He was to hold this Fellowship, in addition to other posts, until his death. Adams became Regius Professor of Mathematics at St Andrews in October 1857. It was a short tenure of the chair for, in March 1859, he succeeded Peacock as Lowndean Professor of Astronomy and Geometry at Cambridge and held the post for over 32 years. He became director of the Cambridge Observatory in 1861 but negotiated rather unusual conditions for his appointment. The Observatory was poorly funded and Challis had tried hard to obtain support for it. Eventually, in December 1858, Challis arranged with Anne Sheepshanks that she make a donation in memory of her brother. Challis and Stokes approached Adams to take on the directorship in place of Challis who wished to leave the post. Adams was interested in theoretical work, not in observing, so he made conditions that he would not have to observe or process data. He could resign the position if he found that the work in any way interfered with his research. All this was possible since the Sheepshanks donation enabled a senior assistant to be employed to undertake observational work.

In October 1862 Adams met Elizabeth Bruce, from Dublin, who was a friend of Stokes's wife. They met again in December when Adams went to Ireland to offer the senior assistant position to Andrew Graham, director of Markree observatory. Adams proposed marriage to Elizabeth and they were married on 2 May 1863.

And thus was established the close relation between comets and meteors.

Adams spent much effort on the complex problem of a description of the motion of the Moon, giving a theory which was more accurate than that of Laplace. He began this work in 1851 when elected as President of the Royal Astronomical Society and he presented a paper to the Royal Society in 1853 in which he showed that Laplace had omitted terms from his equations which were not negligible. His corrections to Laplace's work reduced by half the discrepancy between the observed orbit and the predicted one. The error is now known to be due to the tidal drag of the moon on the Earth which is slowing down the Earth's rotation. It is fair to say that the French were not pleased to see Adams correcting Laplace, particularly since they had reacted angrily a few years earlier when they saw him as attempting to detract from Le Verrier's glory.

Adams also studied terrestrial magnetism, determined the Gaussian magnetic constants at every point on the Earth and produced maps with contour lines of equal magnetic variation which were published after his death. He also gave tables of the positions of the moons of Jupiter, spent much time on a catalogue of Newton's papers, and calculated Euler's constant to 236 decimal places. In all he wrote about 50 papers, of which eleven were on pure mathematics, but it was his passion for perfection which prevented him publishing much more. Glaisher writes [9]:-

For forty-five years his [powerful] mind was constantly directed to mathematical research relating principally to astronomy [but because of his] innate craving for perfection [he published little].

Adams will be best remembered, however, for his role as the co-discoverer of Neptune. We return to this topic now since the difference between his role in that discovery and that of Le Verrier is more clearly understood when Adams's character is studied. A fellow undergraduate at Cambridge could hardly remember Adams and described him as:-

A rather small man, who walked quickly, and wore a faded coat of dark green.

Always meticulous, Adams had a reputation for constructing mathematical questions for his students which were admired by all for their beauty (except perhaps the students being examined!). He was a man of great learning studying history, literature, biology and geology. He had a keen interest in politics and he was so affected by the Franco-Prussian war that, according to [11]:-

... he could scarcely work or sleep.

He never boasted of his achievements and in fact he refused a knighthood which was offered to him in 1847. He did, however, accept honorary degrees from Oxford, Dublin, Edinburgh, and Bologna. He was elected to the Royal Society, the St Petersburg Academy, and to the Academy of Sciences.

After the discovery of Neptune, Adams first met Le Verrier in Oxford in June 1847. According to [9]:-

He uttered no complaint, he laid no claim to priority, Le Verrier had no warmer admirer.

Adams' interests outside science are described by Hutchins [3]:-

Adams was happily married, profoundly devout, and enjoyed social visits, house guests, entertaining, music, dancing, parties, long daily walks, croquet, bowls, and whist. He shared contemporary interests in mesmerism and the occult. A bibliophile, when not socializing in the evenings he read. He attended the weekly meetings of The Family, a university dining club, at least from 1860 to 1889. He was much involved in college and university business.

In October 1889 Adams became seriously ill with a stomach haemorrhage. He recovered but the illness recurred and this cycle repeated itself several times until June 1891. From this time on it was clear that no recovery would occur. He died in the Cambridge Observatory.

The portrait above was taken when he was in St Andrews by the pioneer photographer John Adamson.
Other Mathematicians born in England
A Poster of John Couch Adams

Other pages about John Couch Adams:

Other websites about John Couch Adams: