The Reaches of the Milky Way

After millennia spent determining the workings of our own solar system, questions now turned to the stars and the size of our galaxy. During this period, the term 'galaxy' and universe were used interchangeably as they were believed to be one and the same. The idea that the universe extended beyond our Milky Way seemed to some, unfathomable, much as the concept of the stars being in motion.
Since before 1895BC (the formation of Babylon), the stars were considered static, fixed points in space (the Assyrians even included the sun among their unchanging rank, as despite its apparent motion across the sky, it remained itself a perfect spherical body). It was not until the telescope in 1609 and our ability to examine them properly that we realised that they weren't simply stationary and that the sun was not a perfect sphere. In the late 18th century, William Herschel and his sister Caroline Herschel made vast progress in this area cataloguing thousands of stars and comets, as well as discovering the planet Uranus and the existence of binary stars.

William's son, John Herschel, continued his father's work and attempted to measure the parallax of the stars. The absence of observable parallax had been a problem since the 3rd century BC when Aristarchus realised it would prove the motion of the Earth. In the 16th century, Brahe, after numerous failed attempts to measure parallax concluded that the earth must therefore be stationary. Since heliocentric theories were unable to predict celestial motion any better than the epicycles from Ptolemy's work [See: Structure of the Solar System], the inability to determine parallax appeared to provide scientific evidence against the Copernican system. This was not resolved until 1838 when John Herschel's contemporary, Bessel became the first person to measure parallax successfully, long after Newton had boosted the plausibility of the Keplerian model with his universal theory of gravitation [See: Dynamics of the Solar System]. It was not until Einstein's general theory of relativity that the planetary motions were satisfactorily described. [See: The Infinite Universe]

After many attempts to measure the distance to the sun, Le Verrier in 1872 was the first to do so with a value close to our current approximation. (The mean distance to sun is now believed to be 1.5 × 1011 m). Le Verrier was also involved in a priority dispute with Adams over the discovery of Neptune. Despite Adams calculating Neptune's trajectory first [See: John Couch Adams' account of the discovery of Neptune], the English astronomer he asked to search for it did not do so in time before Galle and Le Verrier could announce their discovery.

Regardless of its discoverer, the existence of Neptune as well as the vast distance to our sun proved our solar system was larger than previously imagined. The question remained as to the size of our galaxy, and if there existed matter outside of it. The advent of spectroscopy which gave a way of investigating the chemical makeup of stars brought stellar composition into the scope of astronomy. In 1655-56 Newton had discovered that white light was composite, and in 1802 Wollaston saw dark lines in the spectrum that he believed were boundaries between the colours. However, later in 1814-15 Fraunhofer, who invented the first spectroscope, observed the sun and saw hundreds of dark lines. This could not be explained by colour boundaries and Fraunhofer realised that lines corresponded to different wavelengths. In the 1860's, Kirchhoff and Bunsen performed rigorous experiments and discovered that the lines were associated with chemical elements, which meant we could determine the chemical composition of the sun. While Fraunhofer had used his spectroscope to observe other stars, it was Huggins and Miller who popularised the idea that spectroscopy could be applied to other nebulae and stars. [See: Light I and Light II] 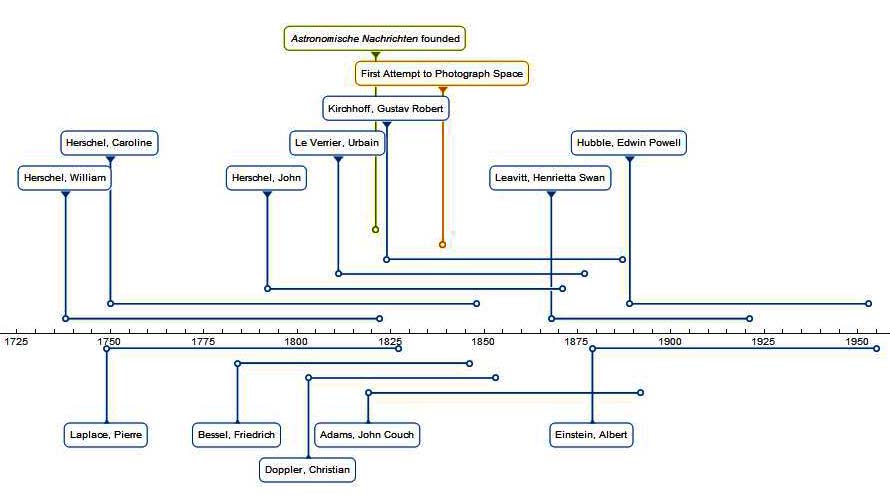 Doppler, in 1842 proposed his famous theory that the colour of light would be affected by the velocity of its propagator. (Light from sources moving towards us appears bluer, and from sources moving away from us appears redder.) As Doppler was not an astronomer, he overestimated the velocity of stars in his calculations. Fizeau in 1860 came to more accurate conclusions and the effect was first measured in the years around 1890 using spectroscopy by Vogel, Scheiner and Keeler in Potsdam and California after unsuccessful attempts by Huggins and Secchi. Doppler shift was to prove useful later in the discovery of 'spectroscopic binary' star systems and Hubble's law.

Henrietta Swan Leavitt made noteworthy progress examining the variable stars, that we now know as Cepheid variables, in the Small Magellanic Cloud. From her analysis, she realised that the period of a Cepheid was directly related to its luminosity. When put together with measurements of the distance of closer variable stars using secular parallax by Herzsprung (1913) and then Shapley (more accurately in 1918), Leavitt's period-luminosity relationship provided a way of measuring the distances away of Cepheids by comparing their absolute to their apparent magnitudes. Hubble subsequently measured the distance to Andromeda, our nearest galaxy. He calculated this to be 300,000 parsecs away which, although we now approximate the distance to be 780,000 parsecs, was considered such a large distance as to confirm the 'island universe' theory that suggested there were other galaxies scattered in space and not simply one very large galaxy, our own Milky Way. The far reaches of the universe however, were yet to be determined. [See: The Infinite Universe]