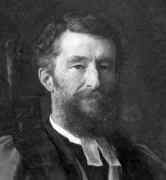 Norman Ferrers' parents were Lavinia Macleod and Thomas Bromfield Ferrers. Thomas Ferrers was a stockbroker who came from London, his wife Lavinia being from Harris, part of the Hebrides islands off the west coast of Scotland. Norman was his parents' only child. The family was well off and Norman had a privileged education attending Eton College from 1844 to 1846, then finishing his pre-university education by spending a year living in the home of the mathematician Harvey Goodwin, vicar of St Edward's, Cambridge, who gave him private coaching.

Ferrers entered Gonville and Caius College, Cambridge, on 6 March 1847 and, over the next four years, studied the Mathematical Tripos. He was an outstanding student and was Senior Wrangler in 1851 (meaning that he was ranked first in the list of those being awarded First Class degrees). He was also the first Smith's prizeman in 1851 and, in the following year, was elected a fellow of Gonville and Caius College. However, as Cayley had done a few years earlier, Ferrers went to London to study law and was called to the bar in 1855. Unlike Cayley he did not practice law but returned to Cambridge were he studied for the priesthood. He was ordained deacon in 1859 and priest in 1860.

Now although Ferrers was studying for the priesthood, soon after he returned to Cambridge he was offered the post of lecturer in mathematics which had resulted from changes in the tutorial staff at Caius College. Venn writes that [3]:-

... the Master, Dr Edwin Guest, invited Ferrers, who was by far the best mathematician amongst the fellows, to supply the place. His career was thus determined for the rest of his life. For many years head mathematical lecturer, he was one of the two tutors of the college from 1865. As lecturer he was extremely successful. Besides great natural powers in mathematics, he possessed an unusual capacity for vivid exposition. He was probably the best lecturer, in his subject, in the university of his day.

Ferrers married Emily Lamb, the daughter of the dean of Bristol and master of Corpus Christi College, Cambridge, on 3 April 1866. Norman and Emily Ferrers had four sons and a daughter. McConnell writes in [2]:-

In his early days Ferrers was a keen university reformer, within the limits of the time. For more than twenty years he was a member of the council of the senate at Cambridge: first elected in 1865, he was dropped the following year because his liberal ideas on admission of nonconformists to fellowships displeased the majority of electors. When the passing of the Test Act closed this controversy he was re-elected in 1872, and served continuously to 1892, when increasing infirmity obliged him to stand down. In the mathematical tripos he acted as moderator or examiner more often, it is believed, than any one else hitherto.

When Dr Edwin Guest resigned as Master of Gonville and Caius College, Ferrers was appointed to succeed him on 17 October 1880. He served as vice-chancellor of the University of Cambridge in 1884 - 5.

It was as a mathematician that Ferrers acquired fame outside the university. He made many contributions of importance to mathematical literature. His first book was "Solutions of the Cambridge Senate House Problems, 1848 - 51". In 1861 he published a treatise on "Trilinear Co-ordinates," of which subsequent editions appeared in 1866 and 1876. One of his early memoirs was on Sylvester's development of Poinsot's representation of the motion of a rigid body about a fixed point. The paper was read before the Royal Society in 1869, and published in their Transactions. In 1871 he edited at the request of the college the "Mathematical Writings of George Green" ... Ferrers's treatise on "Spherical Harmonics," published in 1877, presented many original features. His contributions to the "Quarterly Journal of Mathematics," of which he was an editor from 1855 to 1891, were numerous ... They range over such subjects as quadriplanar co-ordinates, Lagrange's equations and hydrodynamics. In 1881 he applied himself to study Kelvin's investigation of the law of distribution of electricity in equilibrium on an uninfluenced spherical bowl. In this he made the important addition of finding the potential at any point of space in zonal harmonics (1881).

Readers who are familiar with the concept of Ferrers graphs will wonder which of these works contains this interesting idea. The answer, rather surprisingly, is that none of them do. Are the 'Ferrers graphs' then misnamed? No - not at all - for indeed the idea was due to Ferrers but we know this through the work of Sylvester. The details we now present are based on the interesting paper [4]. In 1853 Sylvester published On Mr Cayley's impromptu demonstration of the rule for determining at sight the degree of any symmetrical function of the roots of an equation expressed in terms of the coefficients in the Philosophical Magazine. In this article he wrote:-

I learn from Mr Ferrers that this theorem was brought under his cognizance through a Cambridge examination paper set by Mr Adams of Neptune notability.

The problem to which Ferrers refers was set by Adams and appeared in a paper taken by students on 7 January 1847. The problem is as follows:-

One could then ask if Ferrers graphs should be named "Adams Graphs". Not at all - Ferrers contribution was the method of solution. Let us explain this method by means of an example. Consider the partition 15 = 6 + 4 + 3 + 2.

In 1882 Sylvester published A construction theory of partitions. In this work he writes:-

The above proof of the theorem of reciprocity is due to Dr Ferrers, the present head of Gonville and Caius College, Cambridge. It possesses the double merit of having set the first example of graphical construction and of putting into salient relief the principle of correspondence, applied to the theory of partitions. It was never made public by its author, but first promulgated by myself in ... 1853.

I have never myself published the demonstration to which you refer. You were yourself, however, kind enough to give it publicity in 1853. I am glad to hear that the lucky hit which I made more than thirty years ago has given rise to so interesting a theory as you describe ...

Ferrers received several honours, the most notable being election as a fellow of the Royal Society in 1877. He was also awarded an honorary LL.D. by the University of Glasgow in 1883. By the time that he wrote to Sylvester in 1883, Ferrers had already been suffering from rheumatoid arthritis for over three years. His health steadily deteriorated and he died in the Gonville and Caius College Lodge.
Other Mathematicians born in England
A Poster of Norman Ferrers

Other websites about Norman Ferrers: