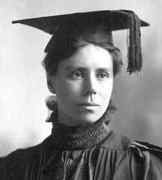 In 1861 Gould had married Mary Apthorp Quincy, the daughter of Josiah Quincy (1802-1882). Her high intelligence, sympathy, cooperation and courage transformed Gould's life and steeled him for every endeavour. Her private fortune provided him financial assistance which enabled him to continue his astronomical work at times when he would otherwise have had to forego them. She bore him five children and shared every privation and sacrifice which his long exile entailed.

Benjamin Gould was keen to observe the southern sky and approached the government of Argentina in 1865 with his plan to set up an observatory in Córdoba. A site was found for the observatory but in 1866 Gould was unable to raise sufficient funding. However, in 1869 he was invited by President Sarmiento of Argentina to set up a national observatory of Argentina in Córdoba. In May 1870, together with his wife and children, Gould sailed to England and then from there they sailed to Argentina. Alice, who was only two years old when she arrived in Córdoba, lived for a while with her family there and learnt to speak both English and Spanish. She was sent back to Quincy, Massachusetts in late 1871, after the observatory in Córdoba had been officially opened, and she lived in the home of her mother's family. Her childhood was spent partly in Massachusetts. partly in Córdoba, since she made many visits to Argentina as she grew up.

The family suffered tragedy when Alice's two elder sisters, Susan Morton Quincy Gould and Lucretia Goddard Gould, drowned in a swimming accident in Argentina. Alice was now the eldest remaining child with two younger siblings Benjamin Apthorp Gould Jr and Mary Quincy Gould. Alice's elementary schooling was partly in Córdoba where she was taught Hispanic history, culture and the Spanish language, and partly in the United States. However, her secondary schooling was partly in the United States and partly in England. Her mother Mary died in 1883 while the family were on a visit to Boston where Benjamin Gould was arranging to have measurements made of the photographic plates he had taken in Córdoba. Benjamin returned to Córdoba leaving Alice and the other two children at a boarding school in Boston. In the school holidays they lived with relatives. In 1885 Benjamin Gould returned to Boston and, shortly after this Alice entered the Society for the Collegiate Instruction of Women (which later was named Radcliffe College) set up to provide education for women who were not allowed to study at Harvard University. She spent one year studying mathematics there before moving to Bryn Mawr College. This College, founded by the Quaker Joseph Taylor in 1885, was the first higher education establishment in the United States to offer graduate instruction to women. Gould graduated with a B.A. in mathematics and physics in 1889.

During the years 1890-93, Gould studied mathematics in England at Newnham College, Cambridge and at the Massachusetts Institute of Technology. Her activities, and those of her family, were noted in the Cambridge Tribune (Massachusetts) in September 1892 [9]:-

Newnham College was the second Cambridge college to admit women. They could attend lectures but, although there were moves to have women take degrees while Gould was studying there, it was not possible for women to graduate. Gould taught mathematics at Carleton College in Northfield, Minnesota in the academic year 1893-94 but, being awarded a fellowship to undertake graduate work in mathematics at the University of Chicago, she began her studies there in 1894, advised by Eliakim Moore. In 1881 Henri Brocard had published Études d'un nouveau cercle du plan du triangle in which he introduced Brocardian geometry. This was the topic that Gould worked on for her Ph.D. but her progress was hampered by ill health. In 1896 her father died and Gould began to put a considerable effort into establishing the Benjamin Apthorp Gould fellowship at the National Academy of Sciences.

Goluld's fellowship at Chicago ended in 1897 but she continued working on her thesis at Chicago, still suffering from spells of poor health. After a while she returned to Cambridge, Massachusetts, with her thesis not yet completed but she did succeed in setting up the Benjamin Apthorp Gould Fund in 1897. She donated $20,000 to establish this Fund and [4]:-

... stipulated among the six major requirements for recipients of awards that preference be given to "the astronomy of precision" rather than astrophysics because of her father's "strong feelings on the subject."

She, like her father, was a friend of Simon Newcomb and she corresponded with him during her efforts to set up the fund to honour her father. Gould lectured on mathematics at times over the following few years, and worked on completing her thesis. However, she also undertook a new project in 1900, writing a biography of the American naturalist Louis Agassiz. The 150-page book was published in Boston in The Beacon Biographies of Eminent Americans series in 1901. William Hall writes in a review [2]:-

... the author of this little volume has given a charming account of his life, his personality, and just enough of his work and teaching to inspire the student of nature with the desire to know more of him. In this the 'bien être' of the biography has been achieved. ... The author is to be congratulated in presenting such a stimulating, pleasant, and acceptable essay to the public.

In this little volume of 150 small pages we have an admirably condensed account of his life, - brief, authentic and fascinating. ... The general public, and especially all lovers of nature, should feel indebted to Miss Gould for her excellent epitome of the life of the great teacher.

In 1903, after a severe bout of flu, Gould decided to travel to Puerto Rico and spend time there recuperating. In fact she spent seven years in Puerto Rico where she became fascinated by the history of colonisation of the island. Undertaking scholarly research for an article o the history of colonisation was not the only task she undertook during these years but she also worked hard to improve the educational system and she set up "Porto Rico Teachers' Fund" that raised money for a nursing school. Returning to the Boston area, she set off on another trip abroad in 1911 when she set off with a friend on a trip to Rome. However, her friend took ill so when the ship docked in Gibraltar on its way to Rome, they remained there. Gould saw the chance to continue her research into the colonisation of the West Indies and visited the Archive of the Indies in Seville. She began to undertake research into the route taken by Christopher Columbus on his journeys and also on the men who accompanied him. Gould's friend, after recovering, decided not to continue to Rome and returned to Boston. Gould remained in Spain undertaking the research which now fascinated her.

When World War I broke out in August 1914, Gould was still in Spain studying at the Archivo de Simancas. She continued to study there until the United States entered the war in April 1917, when she went to United States Embassy in Madrid and offered her help with the war effort [6]:-

Her excellent language skills, brimming patriotism, and conscientious work habits made her especially valuable there.

However, her family were very concerned for her safety so in March 1918 she returned to Boston. Immediately she joined the campaign to persuade Americans to donate binoculars and other optical instruments for the use by the navy. In June 1918 she contacted Columbia University offering her mathematical expertise to support the war effort. However, as Deborah Kent writes [6]:-

Alliances between American mathematics and the military were not well defined when the United States entered World War I in April of 1917. Although academic mathematicians - like other American faculty members and students - were among the strongest supporters of the cause, it took time to identify how and where to utilize their technical training in the war effort.

She received a reply from Columbia University giving her little encouragement that she could use her skills there for the war effort. She then wrote to her former Ph.D. advisor Eliakim Moore at Chicago. Two possibilities were eventually offered to her. She could be a computer working on range tables at the Army Ordnance office, or she could take a position at the University of Chicago teaching mathematics as part of a navigation course for navy personnel. Moore explained that working on range tables was probably more important work, but it was very monotonous. Teaching appealed more to Gould than being a computer, so she worked at Chicago teaching the summer courses. After these were finished, she was employed by the University of Chicago teaching the mathematics of navigation until January 1919. She found this work highly rewarding and began writing a text on navigation which she never completed.

She prepared to return to Spain but delayed in the United States for longer than she had intended. Although she had decided to undertake mathematics research, she soon returned to the topic of Columbus's voyages and began writing articles in Spanish which were published in the Bulletin of the Real Academia de la Historia. The first article appeared in 1924. She returned to Spain in 1925 and there continued her researches into the travels of Columbus. However, in 1936 General Franco initiated a right-wing revolt against the left-wing Peoples' Front government beginning a three-year civil war. Gould returned to Boston for the duration of the civil war but returned to Spain to live in Simancas. She did much in the way of good works in that city, including the founding of the first pre-school in Simancas.

Gould intended to write a book on Columbus but when she died of a cerebral haemorrhage in 1953 the work was unpublished. However, Nueva lista documenta da de los tripulantes de Colon en 1492 was published in Madrid in Spanish in 1984. Kathleen LeMieux writes ([7] or [8]):-

As Gould studied in minute detail the long neglected Spanish records, she made notes on Columbus's crew and on whatever other information that the files revealed. In her Nueva lista, for example, Gould confirms the Jewish presence on the voyages of discovery. She devotes twelve pages to Luis de Torres, Columbus's converso interpreter. Not only does Gould tell what she has found about de Torres in archives across Spain, but she also summarizes what has been written previously by historians. She sorts out much of the confusion on who sailed with Columbus and when. Those of Jewish blood whom Gould assigns to the first voyage are de Torres and Rodrigo Sánchez de Segovia, while she notes that Maese Bernal (a doctor), Marco (a surgeon) and Alfonso de la Calle were on board during the fourth voyage. Gould advises that, although direct evidence may be scarce, there must have been other Jewish and converso [Jews who had converted to Christianity] crew members. She challenges her readers to continue the search.

Gould was honoured with the Cross of Alfonso the Wise (1924), election to the Spanish Royal Academy of History (1942), and the Order of Isabella the Catholic (1952). She died of a cerebral haemorrhage on the bridge to the Simancas castle. A commemorative plaque marks the site of her death ([7] or [8]):-

According to numerous newspaper accounts at the time, Gould's funeral in Madrid was attended with ceremony and tributes by Spain's historians, intellectuals and dignitaries.

Also in Simancas, a square has been named after her.
Other Mathematicians born in USA
A Poster of Alice Bache Gould