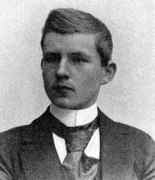 Thomas Hakon Grönwall was born in Dylta bruk in the parish of Axberg, province Orebro, in central Sweden. His parents were Carl Theodor Grönwall and Laura Elisabeth Billqvist. He began his studies at Uppsala University at the age of 16 and after one year transferred to Stockholm (1894-1898). In 1898, at the age 21, he was the author of ten mathematical papers and received his doctor's degree at Uppsala University for the thesis On system of linear total differential equations particularly with 2n-periodic coefficients.

Grönwall left Stockholm and Sweden in 1899 after the authorities, sadly lacking a sense of humour, treated a student's prank in a way which hurt his youthful pride and his love of liberty (see [6], p. 136):-

In May of 1899 Grönwall and his friend had a drunken party which caused some damage at the university. For this his friend was banned from the university for half a year and Grönwall, then a Ph.D. and an extraordinary student at KTH, was banned for the same period. His crime was attendance at the university without being properly matriculated. Naturally enough, Grönwall thought this to be too much for too little and left Stockholm to study at the Charlottenberg Technical Institute in Berlin.

Gronwall practised as a civil engineer in Germany (1902-1903) and then immigrated to the United States in 1904, where he worked at various steel works for longer or shorter periods; he was connected with the American Bridge Co., and the Pennsylvania Railroad and other engineering companies. In 1911 he lived in Chicago and in 1912 he became a member of the American Mathematical Society. From the Chicago meeting on April 5-6, 1912, we can date his return to mathematics.

During 1913-1914 he was an instructor and at 1914-1915 assistant professor at the Princeton University. In the period 1913-1928 he was also the member of the editorial board of the Annals of Mathematics. He gave excellent graduate courses, inspired research, and was very useful to the Annals as a contributor and as a critic. The Annals published more than one third of all his papers.

A number of papers from 1912 established him as a first-class mathematician. During the remaining twenty years of his life his interests oscillated between mathematics and applied research.

Grönwall was a disillusioned man, modest, quiet, and retiring. I have never heard of his having any enemies. His friends found him fair-minded, kind-hearted, and unselfish. He was always willing to put his great knowledge and skill at the service of colleagues, friends, and students, and was eagerly interested in their problems. His non-scientific interests were chiefly intellectual, his acquaintance with general literature was both thorough and wide.

In the years 1918-1922 he worked as a mathematical expert on the Technical Staff of the Chief of Ordinance in Washington and in the Aberdeen Proving Grounds. After demobilization he was a consulting mathematician in New York and spent part of his time at the American Telephone and Telegraph Co.

From 1925 he became a member of the Department of Physics at Columbia University in New York and from 1927 he worked as an associate professor in physics. He had no teaching obligations and undertook research in physical chemistry and atomic physics. He cooperated with V K La Mer who writes (see [10], pp. 779-780):-

Physical chemists are deeply indebted to Dr Grönwall for the interest and rare mathematical skill which brought to bear in solving the problem of the anomaly of strong electrolytes. This problem has been the outstanding stumbling block of physical chemistry since the original formulation of the dissociation theory by Arrhenius in 1888. ... Only a mathematician with Grönwall's gift for analysis and most uncommon grasp of the literature of chemistry and physics could have contributed the elegant solution which he gave. His achievement will remain as a worthy monument of the services which mathematics can render chemistry and physics.

In our several years of close association, Grönwall was never too busy to instruct the writer or his collaborators in elementary and tedious details of mathematical technique. The skill with which he could analyse and solve difficult problems excited the wonder and admiration of his colleagues. The clarity of his mind and writings have been an inspiration to every one associated with him.

During the last years of his life he worked steadily on the wave mechanics of the hydrogen and helium atom. He died on 9 May 1932, in New York.

Grönwall is now mainly remembered for the Grönwall inequality. In 1919 he proved a remarkable inequality, sometimes also called Grönwall's lemma, which has attracted, and continues to attract, considerable attention in the literature (see [5] and the references given there):-

If u is a nonnegative real-valued function defined on an interval I=[a,b] for which the integral inequality

In 1913 Grönwall proved (Grönwall's theorem) that
limsup<i>n</i>\rarrow∞​σ(n)/(nlnlnn)=eγ, where σ(n) is the divisor function and γ is the Euler-Mascheroni constant: limn\rarrow∞​(∑k=1n​k1​−lnn).
The Grönwall summation method of series appeared in 1932 as a generalization of de la Vallée Poussin and Cesáro summation methods (cf. [4], p. 329).

Grönwall published 86 papers and communicated the results of 24 investigations to the Society, the details of which are still unpublished.

Grönwall was first and last an analyst, but he frequently went to other fields for questions to turn into analytical problems. His command of the classical tools of analysis was superb; he worked in practically all the main fields of analysis and left a mark for himself in several. His knowledge of the literature, even in remote fields, was remarkable. His life shows that his unruly spirit found expression, joy, and satisfaction in scientific thinking and creation.

Other websites about Thomas Hakon Grönwall: