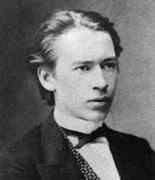 Axel Harnack's parents were Theodosius Andreas Harnack (1817-1889) and Anna Carolina Maria Ewers (1828-1857), known as Maria. Theodosius, born in St Petersburg, Russia, was appointed as a docent in church history at the University of Dorpat in 1843 and, by the time Axel was born, he was Professor of Practical and Systemic Theology there. We note that Dorpat is today known as Tartu, a city in Estonia. The University of Dorpat was in a slightly unusual position since Estonia had been controlled by Sweden and by Russia at different periods and, at this time, it was controlled by Russia. However, teaching at the university was in the German language and, although the finance and administration of the university was from Russia, its academic leanings were towards Germany with the majority of the professors being German.

Theodosius and Maria Harnack had five children, one daughter and four sons. The eldest child was a daughter who died at the age of nineteen but the four sons all went on to become leaders in their own academic areas. The children were: Anna Harnack (1849-1868); Karl Gustav Adolf von Harnack (1851-1930) (known as Adolf) who became a Lutheran theologian and a church historian; Karl Gustav Axel Harnack (1851-1888) (known as Axel), the subject of this biography; Friedrich Moritz Erich Harnack (1852-1915) (known as Erich) who studied medicine and became a pharmacologist, and Rudolf Gottfried Otto Harnack (1857-1914) (known as Otto) who became a professor of history, literature and aesthetics (he committed suicide on 22 March 1914). We note that Adolf and Axel were twins. After the death of Axel's mother Anna in 1857, when Axel was six years old, his father Theodosius married Helene Klementine Amalie von Maydell (1834-1923).

Harnack was brought up in Erlangen in Bavaria since his father had been appointed as professor at the Frederick Alexander University of Erlangen in 1853 when Axel was two years old. The family remained in Erlangen until 1866 when they returned to Dorpat. Axel completed his schooling in Dorpat then, in 1869, he began his university studies in mathematics and physics at the University of Dorpat. There he was taught physics by Arthur Joachim von Oettingen (1836-1920) who had studied physics and astronomy at Dorpat before studying further in Paris and Berlin. He had been appointed Professor of Physics at Dorpat in 1868, the year before Harnack began his university career. Harnak's main mathematics teacher was Ferdinand Minding who had studied and then taught at the University of Berlin before being appointed as Professor of Mathematics at Dorpat in 1843. Harnack was an outstanding student and, in 1872 he was awarded a prize for a geometrical dissertation which has never been published.

Having spent thirteen years growing up in Erlangen, it was a natural choice for Harnack that, after graduating from Dorpat, he went to Erlangen to write his doctoral thesis. Although Erlangen was not a major mathematical centre at this time, the young Felix Klein had been appointed there as professor in 1872 and he was a natural adviser for Harnack. We note that although Klein was a professor, he was only two years older than his student Harnack! The research project that Klein gave Harnack was to further investigate the parametric representation of the third-order curves which had been introduced by Alfred Clebsch. Harnack did excellent work and his thesis Über die Verwerthung der elliptischen Functionen für die Geometrie der Curven dritten Grades Ⓣ was published in Mathematische Annalen in 1875. In fact Harnack published four papers in 1875, the other three being Zur Theorie der ternären cubischen Formen Ⓣ, Über einen Beweis des Abel'schen Theorem Ⓣ, and Über eine Behandlungsweise der algebraischen Differentiale in homogen Coordinaten Ⓣ. The last mentioned of these papers was, in fact, Harnack's habilitation thesis which he submitted to the University of Leipzig where he earned his right to teach and was appointed as a docent in 1875.

For a list of Harnack's papers and books, see THIS LINK.

In Dresden his main task is to teach calculus. In several talks Harnack develops his own view of what the job of a university teacher should be: "clear and complete treatment of the basic terminology, confinement of the pure theory and of applications to evident problems, precise statements of theorems under rather strong assumptions."

However, his health deteriorated from around 1883. In that year he went bathing in the sea and as a result got a chill that turned into a more serious illness which meant he had to stop teaching in 1883. He went to Davos in Switzerland in an attempt to regain his health and indeed there was an improvement which allowed him to resume his teaching duties in Dresden at Easter 1885. While in Davos he had continued to work on mathematics and made a translation of Joseph Serret's Cours de calcul différentiel et intégral Ⓣ into German. Harnack begins the preface to the German translation, published in 1884 as Lehrbuch der Differential- und Integral- Rechnung Ⓣ, writing:-

Among the textbooks on the differential and integral calculus which have been published in the course of the last decade, M Serret's work appears particularly suited to a first, fundamental, study; for it combines with great precision an extreme completeness in the applications of this theory.

Also in the Preface, written in 1884, Harnack explains how he came to make the translation:-

Recognizing that it is not possible to recommend to a student, who has to adopt new concepts, a textbook which is written in a foreign language, even if he has mastered it in the same way, I undertook this German treatment when I had to interrupt my teaching activity for a long time last autumn. I was given permission to do so by the gentleman, as well as by the publisher, Mr Gauthier-Villars, to whom I express my most grateful thanks.

Harnack's book is not simply a translation since he added several long and significant comments. The time that Harnack spent in Davos, sadly, did not lead to a permanent cure, and the illness recurred in the summer of 1887. Again he made a slow improvement and by December 1887 he was well enough to travel to Leipzig to attend a meeting of the Academy there. By February 1888 his condition had worsened again and he was not able to travel but he was still able to give his lectures at the Polytechnic in Dresden.

Harnack had published the book Die Elemente der Differential- und Integralrechnung. Zur Einführung in das Studium Ⓣ in 1881 and George L Cathcart had approached Harnack in March 1888 to see if he would be happy for him to publish an English translation of the text. Harnack replied to Cathcart in letter dated 15 March 1888 about the English translation, wishing to make some changes in the material in the book for the new English edition. An extract from Harnack's letter is available at THIS LINK.

Harnack had been hoping to spend the Easter vacation in the north of Italy and Cathcart replied saying that he too would be in north Italy for the Easter vacation and suggested they meet there during the vacation. However, on 16 March Harnack collapsed when in the middle of giving a lecture at the Polytechnic. On 21 March he wrote to Cathcart:-

I can propose no definite engagement to meet you in Italy, as I have been ill for a week, and my journey has therefore become uncertain.

They never managed to meet in Italy since Harnack died in Dresden on 3 April.

You can read Cathcart's translation of Harnack's Preface to his calculus book at THIS LINK.

We note in passing, that this English translation contains the first known use of the phrase "neighbourhood of a point":-

With the foregoing considerations we have attained the conception of the region or neighbourhood of a point. By it we mean an arbitrarily small but still always finite interval at both sides of the value x.

Harnack's mathematical contributions are significant and, although some of the results he published were false since he made an assumption that two concepts were the same when, in fact, they were subtly different, nevertheless his work is important in the development of integration theory. We saw that he began his research career working on geometry but it seems that, during his year at Darmstadt, he moved towards research in analysis. His 1881 book on differential and integral calculus was widely appreciated and, as we mentioned above, was translated into English.

An indication of the importance of Harnack's contributions can be seen from the fact that (in March 2017) MathSciNet lists 738 papers with "Harnack" in the title. Most of these refer to the Harnack inequality or to the Harnack principle (sometimes known as Harnack's theorem). If one looks at how many papers in MathSciNet have a review which contains Harnack's name, one finds there are 1926. The Harnack inequality appears in his 1887 book Die Grundlagen der Theorie des logarithmischen Potentiales und der eindeutigen Potentialfunction in der Ebene Ⓣ. The inequality relates the values of a positive harmonic function at two points on a closed ball. The Harnack principle may be stated as:

This principle, also in his 1887 book, together with the inequality form the starting point for a very rich and beautiful theory which explains the large number of publications with "Harnack" in the title.
Other Mathematicians born in Estonia

Other pages about Axel Harnack:

Other websites about Axel Harnack: