Born
about 1100
possibly Seville (now Spain)
Died
about 1160
Summary
Jabir ibn Aflah or Geber was an Spanish Islamic mathematician whose works were translated into Latin and so became available to European mathematicians. 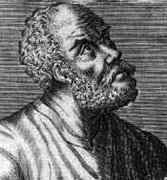 Moses Maimonides, whose Arabic name was Abu 'Imran Musa ibn Maymun ibn 'Ubayd Allah, was a Jewish philosopher, jurist, and physician who was born in Córdoba in 1135. Among many important works he wrote The Guide of the Perplexed in Arabic in which he writes of:-

Jabir ibn Aflah invented an observational instrument known as the torquetum, a mechanical device to transform between spherical coordinate systems (see [3] for further details). He also gave his name to a theorem in spherical trigonometry, and his criticisms of Ptolemy's Almagest Ⓣ are well known. These criticisms appears in Jabir ibn Aflah's most famous work Islah al-Majisti Ⓣ. One sees that ibn Aflah even puts his argument regarding errors made by Ptolemy into the title of the work. In [4] Lorch explains Jabir ibn Aflah's most famous criticism, namely Ptolemy's placement of Venus and Mercury below the Sun. Ptolemy claimed that these planets could never be on a line between an observer on Earth and the sun., but ibn Aflah states that this is an error, and that Venus and Mercury are above the Sun.

The influence of ibn Aflah is quite remarkable. In [4] his influence on astronomers in both the East and West is studied. In particular the author looks at his influence on the Persian astronomer Qutb al-Din al-Shirazi, who was a pupil of Nasir al-Din al-Tusi; on the Hispano-Arabian philosopher ibn Rushd, who is often known as Averroes, was born in Córdoba in 1126 and integrated Islamic traditions and Greek thought; and on Levi ben Gerson (sometimes known as Gersonides). One of ibn Aflah's more infamous influences was on Regiomontanus who copied large parts of ibn Aflah's work in the fourth book of his publication De triangulis. Regiomontanus did not acknowledge that ibn Aflah was the source of the material and this caused Cardan to strongly criticise Regiomontanus.
Other Mathematicians born in Spain
A Poster of Jabir ibn Aflah

Other websites about Jabir ibn Aflah: