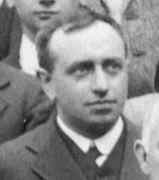 David Johnstone entered St Leonard's Public School, Edinburgh, in 1883. He spent seven years at the school, followed by five years at George Heriot's Hospital School, Edinburgh. In this latter school he was in the same class as Drysdale and the two became friends (they went together when they first matriculated at Edinburgh University and appear in the Matriculation Album as consecutative entries). Johnstone gave his home address as 27 St Leonard Street when he first matriculated.

At George Heriot's, Johnstone sat the Leaving Certificate examinations and passed at Higher level English, Mathematics, French, and Latin (some in June 1894, some in June 1895). After having passed the Preliminary Examination, he first matriculated at Edinburgh University in October 1895. He studied Mathematics and Natural Philosophy at the Ordinary level between October 1895 and April 1896. In the following session he took courses in Logic, Psychology and Chemistry. He studied Latin during the summer of 1896 and 1897. He thejn concentrated on Mathematics and Natural Philosophy, taking these at Intermediate Honours level in 1896-97 and 1897-8 respectively, then both at Advanced Honours level in 1898-99 and 1899-1900. He graduated with an M.A. with Second Class Honours in Mathematics and Natural Philosophy in April 1900. He was awarded a B.Sc. (Pure) in the same year.

Johnstone joined the Edinburgh Mathematical Society in December 1900 after he graduated. By this time he was a Science Master at Spier's School, Beith. He soon moved back to the school where he himself had studied when appointed to George Heriot's School. He taught there for over 20 years before moving to the Provincial Training College, Edinburgh on 1 October 1925.

Archibald Milne was the Principal Lecturer in charge of Mathematics at Edinburgh Provincial Committee for Teacher Training, that is Moray House; he was assisted by a lecturer who taught both Mathematics and Science. In the Minutes [4] (dated 20/7/1925) it reported that Dr Milne was recommended for the appointment of Depute Director of Studies. This post arose from the agreement between the University Court and the National Committee (to which Edinburgh Provincial Committee for Teacher Training reported and made recommendations) to jointly appoint to the post of Professor of Education and Director of Studies. (The first appointee to this post was Professor Godfrey Thomson).

The same Minutes note that for the post of Principal Lecturer Mathematics five candidates had been interviewed. 'Mr David M Johnstone M.A. B.Sc., Mathematical Master in George Heriot's School' was recommended to the Central Executive Committee for appointment. His pay scale was £650 in £20 increments to £750.

Mr Johnstone remained at Moray House as Principal Lecturer Mathematics until 1935. The Minutes of 16/10/1935 report that Mr Johnstone had died:-

Mr Johnstone was Master of Arts of Edinburgh University with Honours in Mathematics and Natural Philosophy, and held also the B.Sc. degree. After twenty five years' experience as a teacher he was appointed to Moray House Staff on 1 October 1925 as Principal Lecturer in Mathematics.

He proved himself to be a gifted lecturer and a wise and tactful member of the Methods staff. In the social and corporate life of the College he took a most active and ungrudging share. For his strong integrity of character and his happy personality he was held in high regard by the Provincial Committee, by all his colleagues, and to an exceptional degree by his students.

Mr William Taylor was recommended as the appointee to replace Mr Johnstone.

Johnstone joined the Edinburgh Mathematical Society in December 1900 after he graduated. By this time he was a Science Master at Spier's School, Beith. He remained a member of the Society for the rest of his life.
Other Mathematicians born in Scotland
A Poster of David Johnstone