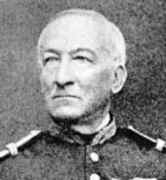 Ernest de Jonquières entered the École Navale at Brest in 1835. After graduating from the school he spent 36 years in the French navy. He reached positions of high rank, being made a lieutenant in 1841 and serving on the Admiralty Council from 1848 to 1850. In 1846 Chasles had been appointed to a chair of higher geometry at the Sorbonne which had been specially created for him. De Jonquières' appointment to the Admiralty Council meant that he was living in Paris during this period and he was already interested in mathematical research after reading the works of Poncelet and Chasles. In Paris de Jonquières could take full advantage of the mathematical environment [5]:-

... his geometric creative faculty developed in an astonishing manner, and it did not take him long to become Chasles' most eminent pupil and the most gifted commentator on his works.

This was the period when Chasles was collecting material for his Traité de géométrie Ⓣ (1852) in which he discusses cross ratio, pencils and involutions - all notions which he introduced. De Jonquières thrived in this association with Chasles proving results which Chasles conjectured and solving problems which he put forward.

After the period in Paris, de Jonquières visited several countries as part of his naval duties. During 1860-61 he made lengthy sea voyages and this provided him with much time free from distractions during which he could work out many of the mathematical ideas which he was developing. It also put him in an excellent position to enter an essay for the Grand Prix of the Academy of Sciences for 1862 which had the topic:-

Summarise, discuss and improve in some important point the known results on the theory of plane curves of the fourth order.

The committee which evaluated the entries decided to split the prize, but de Jonquières' entry was considered the best and he received two-thirds of the prize.

In 1865 de Jonquières was promoted to captain of a naval vessel. He was sent to Indo-China where his mission was to establish the first agricultural and industrial exposition at Saigon. Saigon had been captured by the French in 1859, and in 1862 it had been ceded to France by the Vietnamese emperor Tu Duc after negotiations with the French commander Louis-Adolphe Bonard:-

As the capital of Cochinchina, Saigon was transformed into a major port city and a metropolitan centre of beautiful villas, imposing public buildings, and well-paved, tree-lined boulevards.

De Jonquières played an important role in the transformation of the city by the French.

After his return he was on the Naval Works Council, then on 17 December 1874 he was appointed as Rear Admiral, becoming Vice-Admiral on 1 October 1879. He retired in 1885 having been elected an academician by the Institute of France on 24 March 1884.

After his introduction to advanced mathematics by Chasles it is not surprising that his main interests were geometry throughout his life. He made many contributions many of them extending the work of Poncelet and Chasles. An early work, the treatise Mélanges de géométrie pure Ⓣ (1856) contains: an amplifications of Chasles' ideas on the geometric properties of an infinitely small movement of a free body in space; a commentary on Chasles' work on conic sections; the principle of homographic correspondence; and constructions relating to curves of the third order. In a final section de Jonquières presented a French translation of Maclaurin's work on curves.

In 1859 de Jonquières introduced the birational transformation, later studied by Cremona, which is

where a(x).d(x)−b(x).c(x)​=0. This appears in a memoir presented to the Institute of France at a meeting on 10 October and also at a meeting on 23 January in the following year. In fact de Jonquières' paper was not published until 1885 although a summary of it was published in 1864.

He also studied curve beams, algebraic curves and surfaces, linking his work with that of Salmon, Cayley and Cremona. In addition de Jonquières discovered results in the area of Schubert's Abzählende Geometrie Ⓣ . He also worked on algebra, in particular the theory of equations, and, in the latter part of his life, on the theory of numbers where he examined Diophantine equations and the distribution of primes. Another topic which he studied after retiring from the navy was the theory of polyhedra. In this area he made historical investigations, discovering that Descartes had come up with the famous formula F+V=E+2 long before Euler.

... his results form a series of detailed supplements to the work of others and reflect Jonquières's inventiveness in calculating rather than a more profound contribution to the advancement of the field.

In [5] Loria writes about de Jonquières in poetic terms linking his mathematical approach to his naval life:-

... de Jonquières has a right to a distinguished place among the geometers of second rank who flourished in France in the latter half of the nineteenth century. It he did not rate higher, it was because his occupation as a seaman did not permit him to; we can believe this, for his official duties reflected visibly on his mathematical production. In fact, the discontinuities in his researches in pure science produced those gaps in his culture, that inadequate knowledge of the literature of his time, which stand out in a great number of his works. But (leaving aside his research in the realm of number in which he followed known and sure paths) the daily battle with the waves of the ocean appears to have endowed him with an admirable courage and valuable initiative; we see him approach with a smile questions capable of frightening consummate mathematicians, and calmly employ dangerous methods, the legitimacy of which is still under discussion. One might say that if, as a soldier, de Jonquières belonged to the regular army, as a geometer he presented all the character of a guerrilla, despising antiquated routine and rising to attack by the most dangerous paths. Other fearful geometers, preferring the classical roads, did not fail to proclaim the wounds that befell him, which we, as impartial historians, have not hidden; but we can answer that wounds are part of heroes, and that only cowards who never go into battle escape them.

The work [2] in the list of references is an autobiography.
Other Mathematicians born in France
A Poster of Ernest de Jonquières

Other websites about Ernest de Jonquières: