Born
28 August 1910
'sGraveland, Netherlands
Died
26 February 1985
New Haven Connecticut, USA
Summary
Tjalling Charles Koopmans was a Dutch American mathematician and economist. He won the Nobel prize in Economics for his work on the theory of the optimum allocation of resources. 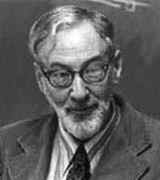 Tjalling Charles Koopmans was known as Challing to his colleagues. His parents, Sjoerd Koopmans and Wijtske van der Zee, were both school teachers who held education in the highest regard. His father was a strict Calvinist but his mother was more liberal in her religious views. Tjalling had two older brothers and all three boys attended the school of which their father, Sjoerd Koopmans, was the headmaster. In fact their home was sandwiched between two buildings which formed the school. The oldest boy, Jan, became a minister of the Dutch Reformed Church, while the middle boy, Hendrik, became a chemical engineer. Home life was happy with much music making (Tjalling was taught to play the violin) and frequent religious instruction.

When he was twelve years old, Tjalling was sent to the Christian High School at Hilversum which was about 15 km from his home. There he learnt mathematics, physics, chemistry, Latin, Greek, and three modern languages. At age fourteen Tjalling was awarded a stipend by the St Geertruidsleen of Wijmbritseradeel which supported him during his remaining three years at the Christian High School and it also supported him at the University of Utrecht, which he entered in 1927. There he studied mathematics and theoretical physics, was interested in the philosophy of science, but he also became interested in economics. However his first two publications, while still an undergraduate at Utrecht, were on quantum mechanics. Koopmans graduated with the equivalent of a Master's degree in 1932.

After his studies at Utrecht, Koopmans studied under Jan Tinbergen in Amsterdam during 1934 and then under Ragnar Frisch in Oslo in 1935. His doctoral thesis Linear regression analysis of economics was presented to the University of Leiden and he was awarded his doctorate in 1936. In October of the same year he married Truus Wanningen who was an economist; they had three children, two daughters Anne and Helen, and a son Henry. Koopmans was appointed as a lecturer at the Netherlands School of Economics, Rotterdam, in 1936 where he spent a couple of years as a colleague of Tinbergen before moving to the League of Nations in Geneva. Here he worked on business cycle modelling and again was a colleague of Tinbergen who worked there as a scientific advisor. In May 1940 German troops invaded the Netherlands and France and by the middle of June they occupied Paris. Koopmans fled from the Nazi threat in June, going to the United States with his wife and six week old daughter. Samuel Wilks gave him every assistance during this difficult period but finding a permanent job was hard. He was first a research assistant at Princeton during 1940-41 then was employed by the Penn Mutual Life Insurance Company in Philadelphia for a year. Following this Koopmans worked for two years for the British Merchant Shipping Mission in Washington [1]:-

In that position he was concerned with the selection of shipping routes that would minimize the total cost of transporting required quantities of goods, available at various locations in America, to specified destinations in England. He showed that the desired result is obtainable by the straightforward solution of a system of equations involving the costs of the materials at their sources and the costs of shipping them by alternative routes. He also devised a general mathematical model of the problem that led to the necessary equations.

In 1944 he wrote Exchange ratios between cargoes on various routes but it was only published for the first time in 1970 in [2] which is a collection of 28 of Koopmans' papers published to celebrate his sixtieth birthday. In this 1944 work he initiated the topic of operational research called 'activity analysis' for which he received (jointly with Kantorovich) the Nobel Prize in Economics for 1975. He is also considered as one of the three inventors of linear programming during this period. Dorfman writes [6]:-

Around 1940, linear programming was an idea whose time had come. Accordingly, it was discovered three times, independently, between 1939 and 1947, but each time in a somewhat different form dictated by the special circumstances of that discovery. The first discovery was by L V Kantorovich, a Soviet citizen, the second was by T C Koopmans, Dutch, and the third by G B Dantzig, American.

Dantzig also examines Koopmans' contributions to linear programming in [5] where he writes:-

Linear programming is viewed as a revolutionary development giving man the ability to state general objectives and to find, by means of the simplex method, optimal policy decisions for a broad class of practical decision problems of great complexity.

Let us briefly mention some of Koopmans' papers. In Identification problems in economic model construction (1949) he used matrix methods to study structural equations within a linear economic model. His paper The identification of structural characteristics (1950), written jointly with O Reiersol, is concerned with the problem of drawing inferences from the hypothetically exact probability distribution of observed variables to the theoretical structure which generates the distribution. Assignment problems and the location of economic activities (1957), written jointly with M Beckmann, examines the allocation of indivisible resources. Three Essays on the State of Economic Science (1957) [9]:-

... is a masterful introduction to the welfare properties of competitive allocation mechanisms in terms of activity analysis.

The emphasis lies heavily on applications of the theory of convex sets, and in particular of convex polyhedra, to problems relating to efficient allocation of economic resources, as the following outline indicates: Existence and optimality of competitive equilibrium; equilibrium in international trade; equilibrium over time and capital theory; von Neumann's linear growth model; linear activity analysis and some applications; macroeconomic dynamics; econometrics.

He published Stationary ordinal utility and impatience (1960) and a further continuation of this work in Stationary utility and time perspective (1964). The paper On the existence of a subinvariant measure (1964), written with R E Williamson, is an interesting work on measure theory which gives a construction analogous to that of the Haar measure for compact sets. His article On the concept of optimal economic growth (1965) is one of the best introductions to his major contributions to the optimal allocation of economic resources over time. Finally Koopmans own summary of Objectives, constraints, and outcomes in optimal growth models (1967) is as follows:-

This paper surveys the results of mostly recent research on optimal aggregate economic growth models, and comments on the difficulties encountered and on desirable directions of further research.

Matthews writes of Koopmans character and interests in [9]:-

Koopmans was known to friends as a modest scholar, one committed to precise answers for narrow, well-defined questions, and as an accomplished amateur musician and chess enthusiast.

His greatest honour was receiving the Nobel Prize for Economics in 1975. He was also honoured by election to the National Academy of Sciences (United States) and the American Academy of Arts and Sciences. He was president of the American Economics Association and also of the Econometric Society.

Koopmans, who lived in Hamden, Connecticut, died at Yale-New Haven Hospital after suffering a series of cerebral strokes.
Other Mathematicians born in Netherlands
A Poster of Tjalling Charles Koopmans

Other websites about Tjalling Charles Koopmans: