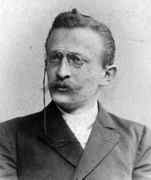 Georg Landsberg's parents were Bernhard Landsberg and Philippina Buttermilch. Bernhard Landsberg was a businessman, but we have not been able to find any further information about him. We have, however, found background information about his wife, Philippina, the mother of Georg the subject of this biography. Philippina was born in Leszno, Greater Poland, Poland on 2 October 1824 to Jacob Buttermilch (1800-1866) and Elka Gottstein (1796-1872). Bernhard and Philippina married and had at least two children, Georg, the subject of this biography, and a daughter Regina Landsberg. Philippina Landsberg died on 3 January 1898 in Breslau.

Landsberg attended the St Elisabeth Gymnasium in Breslau. This famous school had been founded in 1293 and, after changing its name several times, became the St Elisabeth Gymnasium, named after the mother of John the Baptist. New buildings which had been built in the 1830s were being extended while Landsberg was a pupil as the popular school ran out of space. When Landsberg began his schooling there the headmaster was Karl Rudolf Fickert (1807-1888). Fickert, a classics scholar of high repute, had been headmaster from 1845 but retired in 1880 in the middle of Landsberg's time at the school. The new headmaster was Johannes Paech (1839-1907) who filled this role from 1881 to 1907. Landsberg mentions both Fickert and Paech in the CV he inserted at the end of his 1890 doctoral thesis [4].

After completing his studies at the St Elisabeth Gymnasium, Landsberg then studied at the Universities of Breslau and Leipzig between 1883 and 1889. We know about the topics that he studied at these universities since he names and thanks all his lecturers in the CV attached to his doctoral thesis [4]. At Breslau he was taught mathematics by Jakob Rosanes, Heinrich Schröter and Otto Staude (1857-1928). Rosanes taught at Breslau from 1870 becoming a full professor from 1876, and continuing to hold this position for the rest of his career. He worked on algebraic geometry and invariant theory. Schröter habilitated at Breslau in 1855 and became a professor there in 1861. He created at Breslau a world-leading centre for synthetic geometry. Staude was a student of Felix Klein's in Leipzig, graduating in 1881. He habilitated at Breslau in 1883 and remained there until 1886. He worked on analytical geometry.

In addition to studying mathematics, Landsberg's other main subject at Breslau was physics which he was taught by Oskar Emil Meyer (1834-1909), Felix Auerbach (1856-1933), and Joachim Leonhard Weber (1848-1919). Meyer was Professor of Mathematics and Theoretical Physics at Breslau from 1866, remaining there for the rest of his career. He worked on the viscosity of gasses. Auerbach became an assistant to Oskar Emil Meyer at the physics department of the University of Breslau in 1879 then, in 1880, he became a lecturer there and remained until 1899. His thesis was The nature of vocal sounds. J L Weber was a full professor of Theoretical Physics at the University of Breslau. He worked on lightning.

Although Landsberg's main topics at Breslau were mathematics and physics, he also studied a wide range of other topics. The other subject which he took several courses on was philosophy. He took philosophy courses with Jacob Freudenthal (1839-1907), Theodor Hubert Weber (1836-1906), and Benno Erdmann (1851-1921). Freudenthal became a lecturer at Breslau in 1875, was promoted to assistant professor in 1878 and to professor 1888. He is famed for his work on Spinoza. T H Weber was Professor of Philosophy at the University of Breslau from 1872 to 1890. He worked on metaphysics and Kantian epistemology. Erdmann was a philosopher, logician and psychologist. He was Professor at Breslau from 1884-1890 and worked on Kant but also published an interesting book on the foundations of mathematics Die Axiome der Geometrie, eine philosophische Untersuchung der Riemann-Helmholtz'schen Raumtheorie Ⓣ (1877).

At Breslau, Landsberg also studied astronomy with Johann Gottfried Galle (1812-1910) who had moved to Breslau 1851 as Director of the Observatory, becoming Professor of Astronomy there from 1856. He discovered Neptune in 1846 using Le Verrier's data. At Breslau he worked on exact descriptions of planetary orbits and on comets. Landsberg took a chemistry course with Thomas August Theodor Poleck (1821-1906) who was appointed director of the pharmaceutical institute at the University of Breslau in 1867. He was Dean of the Faculty in 1887-88 and rector of the University in 1888-89. Landsberg also studied with the biologist Ferdinand Julius Cohn (1828-1898) who worked at Breslau from 1849 until he retired. He was one of the founders of modern bacteriology and microbiology.

At Leipzig Landsberg took a narrower range of courses all within mathematics and physics. He was taught by five mathematicians, Felix Klein, Walther von Dyck, Adolf Mayer (1839-1908), Carl Neumann, and Friedrich Schur (1856-1932). Klein held the Chair of Geometry at Leipzig from 1880 to 1886, von Dyck was Klein's assistant at Leipzig from 1880, remaining there until 1886. Mayer habilitated in 1866 at the University of Leipzig. There he became an associate professor in 1871 and an extraordinary professor in 1881. In 1882 Mayer became co-director of the mathematical seminar founded by Felix Klein. From 1890 to 1900 he was full professor in Leipzig. His research areas were partial differential equations, calculus of variations and analytical mechanics. Carl Neumann held the chair at Leipzig from 1868, remaining there until he retired in 1911. He worked on differential and integral equations. Friedrich Schur became an assistant to Klein at Leipzig in 1884. He studied differential geometry and Lie groups. The only other lecturer that Landsberg studied with at Leipzig was the physicist Gustav Heinrich Wiedemann (1826-1899). Wiedemann accepted the chair of physical chemistry at Leipzig in 1871, transferring to a professorship in physics in 1887. He is best known for his work in magnetism as well as his achievements as an author.

Landsberg's doctorate was awarded by the University of Breslau in 1890. His Ph.D. examination was on 19 December 1889 and his Inaugural Dissertation Untersuchungen über die Theorie der Ideale Ⓣ was defended on Saturday 29 March 1890 at 11:00 in the Aula Leopoldina with opponents Max Hamburger, an assistant in the Physics Institute of the University of Breslau and Hans Seger. Landsberg dedicated his 60-page thesis to "My dear parents."

For a list of publications by Landsberg, beginning with his thesis, see THIS LINK.

In 1890 Landsberg went to Berlin where he studied on his own, working towards his habilitation. He joined the teaching staff at the University of Heidelberg in 1893, habilitating on 29 April, and he taught there being promoted to extraordinary professor on 17 February 1897. During these seven years he lived at various addresses in Heidelberg: 1893-1895, Bergheimer Str. 81; 1896, Landhausstr. 14; 1897-1902, Sandgasse 5 (from 1901 due to renumbering the same house became No. 9); 1903, Plöck 79. (The house where Landsberg lived had been built around 1850 for the university's first gymnastics teacher, Dr Karl Wassmannsdorff (1821-1906). In the rear of the building, when Georg Landsberg was living there, Wassmannsdorff ran a private gym); and 1904, Hauptstrasse 118.

In 1904 he returned to Breslau as extraordinary professor of mathematics, taking up the appointment on 27 October, but he was only there for two years for he accepted an offer of an extraordinary professorship at the University of Kiel, starting on 24 October 1906. At Kiel he was promoted to ordinary professor of mathematics in 1911 but sadly he was only to hold this post for a short while since he died the following year. While at Kiel he advised Jakob Nielsen who matriculated at Kiel in the Spring of 1908. Ioan James writes [3]:-

Among his teachers in Kiel, Jakob Nielsen valued in particular the mathematician Georg Landsberg, known among other things for his work on algebraic functions. It was Landsberg who encouraged Nielsen to study the mathematical problems underlying his doctoral dissertation of 1913. In a short autobiography appended to the thesis, he expresses his devotion to Landsberg, who had died shortly before.

Landsberg studied the theory of functions of two variables and also the theory of higher dimensional curves. In particular he studied the role of these curves in the calculus of variations and in mechanics. For example his paper Über den Zusammenhang der Krümmungstheorie der Curven mit der Mechanik starrer Systeme des n-dimensionalen Raumes Ⓣ (1897) generalises Frenet-Serret. He worked with ideas related to those of Weierstrass, Riemann and Heinrich Weber on theta functions and Gaussian sums. His most important work, however was his contribution to the development of the theory of algebraic functions of a single variable. Here he studied the Riemann-Roch theorem. He was able to combine Riemann's function theoretic approach with the Italian geometric approach and with the Weierstrass arithmetical approach. His arithmetic setting of this result led eventually to the modern abstract theory of algebraic functions.

One of his most important works was the book Theorie der algebraischen Funktionen einer Varaiblen Ⓣ (Leipzig, 1902) which he wrote jointly with Kurt Hensel. This work remained the standard text on the subject for many years. As an indication of its importance, we note that it was reprinted in 1965. Leo Corry writes [2]:-

In 1902 Kurt Hensel co-authored with Georg Landsberg a book on the theory of algebraic functions which became a classic in its field. This book, which the authors dedicated to Dedekind, attempted to summarise the vast amount of research conducted in the field during the preceding four decades, and especially the contributions of Weierstrass, Kronecker, Dedekind and Weber. In particular the influence of Dedekind and Weber's 1882 joint article is pervasive throughout the book; Hensel and Landsberg explicitly pointed out the close connections with the theory of algebraic numbers, that had characterised the latest development of the field presented in their book. And yet, the book presented a very-well balanced combination of Dedekind's and of Kronecker's respective approaches, in the relevant sections. The approach developed by Hensel and Landsberg displays very clearly the close attachment of Dedekind's images of mathematical knowledge to those characteristic of nineteenth-century algebra. It showed the extent to which the ideas contained in Dedekind's work could be further developed, without necessarily leading to the structural approach that later developed in algebra.

Let us note that the book is "dedicated to Richard Dedekind on the occasion of 18 March 1902 (the fiftieth anniversary of his doctorate) in the greatest reverence."

In January 1911 Landsberg, at that time an extraordinary professor at Kiel, had been invited to be the successor to Moritz Pasch in the chair of mathematics at the University of Giessen. It was this call to Giessen that prompted the University of Kiel to promote Landsberg to an ordinary professorship. He was, at this time, a scholar with a very high reputation, and it was felt that he had a great future ahead of him as a leading researcher. His death in 1912 came as a blow to the University of Kiel and as a huge loss to the world of mathematics.

Other Mathematicians born in Poland
A Poster of Georg Landsberg

Other pages about Georg Landsberg:

Other websites about Georg Landsberg: