Born
29 April 1872
LeRoy, Michigan, USA
Died
7 December 1952
Wilmette, Illinois, USA
Summary
Forest Ray Moulton was an American astronomer. He was one of the proponents of the planetesimal hypothesis of the origin and evolution of the solar system. 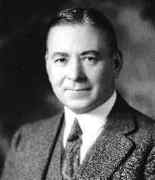 Forest Ray Moulton's parents were Mary C Smith and Belah G Moulton who were farmers with 160 acres of land between Grand Rapids and Traverse City in Michigan. Belah Moulton had fought in the Civil War and had received the land as a war veteran. However it was heavily forested land and Belah had to clear the trees before he could start to farm there. In fact Forest was his parent's first child and he was born in a log cabin in the forest. That Forest was born in the forest is not a coincidence, for his mother named him since he was:-

... a perfect ray of light and happiness in that dense forest.

No formal schooling was possible for Forest in the rural environment that he grew up in, but his parents and grandparents (particularly his mother) gave him a solid foundation to his education. In fact he became a teacher himself a one-room school where pupils of all ages were educated in the same classroom before he received formal teaching himself. Then he entered Albion College, in Albion, Michigan. The college, affiliated with the United Methodist Church, was founded in 1835 to educate the region's settlers and Indians. Moulton became a part-time instructor at Albion in 1892 and held this position until he graduated from the College in 1894. In 1895 he entered the University of Chicago to undertake graduate studies. He was appointed as an assistant in 1896 and in the same year he married Estella L Gillette; they had five children. In 1898 he became an associate professor and Director of the Department of Astronomy. He was awarded a Ph.D. with distinction from Chicago in 1899. His career continued to develop and he reached the rank of full professor in 1912. Once the United States entered World War I, Moulton was commissioned a major in the Army and was put in charge of the Ballistics Branch of the Army Ordinance Department at the Aberdeen Proving Ground in Maryland.

Moulton's main interests were in the application of mathematics to problems in astronomy. He published On a class of particular solutions of the problem of four bodies in 1900 and A class of periodic solutions of the problem of three bodies with application to the lunar theory in 1906 both in the Transactions of the American Mathematical Society. Other papers, this time in the Annals of Mathematics, include The straight line solutions of the problem of n bodies (1910) and The deviations of falling bodies (1913). His books include An Introduction to Celestial Mechanics (1902), An introduction to astronomy (1906), Descriptive astronomy (1912), Periodic orbits (1920) The Nature of the World and Man (1926), Differential equations (1930), Astronomy (1931), and Consider the Heavens (1935). He also became quite a celebrity for, in addition to writing popular texts, he had a regular radio science programme while a professor at Chicago. He was one of the first professors to try to use the medium of radio to popularise science.

Moulton is best known, however, as the co-author with Thomas C Chamberlin of the Chamberlin-Moulton planetesimal hypothesis of the origin and evolution of the solar system. The origin, early development and subsequent fate of the their hypothesis is examined in detail in [1] and [2]. Moulton began working with Chamberlin, who was professor of geology at Chicago, when he was undertaking graduate studies at Chicago. Chamberlin correctly realised that the earth was much older than the age proposed by Kelvin which was accepted at that time. He proposed that the planets and their moons were formed by the accretion of small solid particles rather than by condensation of gaseous or liquid material. However it was Moulton who made Chamberlin's idea into a solid theory by providing the necessary mathematical calculations. Although the theory soon fell out of favour, it contains many ideas which are still part of the modern theories.

After World War I ended Moulton returned to the University of Chicago where he continued to teach until 1926 when he resigned and became a director of the Utilities Power and Light Company in Chicago. He also became an advisor to the president of the Company. The move was not an easy one since the Great Depression began in 1929 and by 1932 one quarter of the workers in the United States were unemployed. Moulton's Company came close to collapse in 1933 but it just survived. He remained a director until 1937 when he took up the post of permanent secretary of the American Association for the Advancement of Science. He remained in this post until he retired in 1948. Moulton and his wife Estella divorced in 1936 and, in 1939, he married Alicia Pratt. In fact he was divorced for a second time in the year before his death.

In 1950 Moulton, by this time 78 years old, moved to Evanston, Illinois, where one of his brothers was Professor of Mathematics at Northwestern University. F C Leonard, writing on the death of Moulton in the Journal of the Royal Astronomical Society of Canada, explains that:-

Moulton was a first-rate teacher and public speaker as well as an accomplished writer, and he ranked as one of the greatest masters of celestial mechanics, not only of his own generation but of all time. As man and scholar, through his sympathetic interest and generous encouragement, he inspired the warmest affection and highest admiration in the student who was privileged to have him for a friend.

Moulton's most famous pupil was Edwin Hubble.
Other Mathematicians born in USA
A Poster of Forest Ray Moulton

Other websites about Forest Ray Moulton: