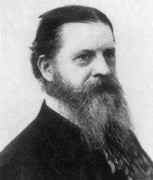 Charles S Peirce was the son of Benjamin Peirce and Sarah Hunt Mills, the daughter of Senator Elijah Hunt Mills. We note that this surname is pronounced "Purse". Charles was the second of his parents five children. His older brother was James Mills Peirce who became a mathematician in the Mathematics Department at Harvard, and then from 1890 to 1895 served as Dean of the Graduate School at Harvard and, after that, as Dean of the Faculty of Arts and Sciences. Charles' two younger brothers also enjoyed successful careers, Benjamin Mills Peirce as a mining engineer and Herbert Henry Davis Peirce as a diplomat.

Charles was born into a leading American household. His father was perhaps the leading scientist in America and he invited academics, politicians, poets, scientists, and mathematicians into his home. A child prodigy, Charles thrived in the intellectual atmosphere. Benjamin Peirce found it difficult to find students who were bright enough to benefit from his teaching, but in his own children he found the talent that seemed to be lacking elsewhere. He used his own educational ideas in teaching Charles and his other children, and in many ways this did set them up to undertake research. However, realising that the greatest thinkers enjoyed an independence of thought, he refused to discipline his children in case he destroyed this originality. In many ways this upbringing produced the genius that Charles displayed but it also gave Charles problems of fitting in, which meant that his life was a difficult one. By the age of twelve Charles was reading standard university level texts on logic, and in the following year he began reading Immanuel Kant's Critique of Pure Reason. He remained greatly influenced by Kant throughout his life.

One might have expected the brilliant young man Charles to make his mark in the education system, but it was at this stage that the independence of thought which his father has so carefully cultivated worked to his disadvantage [13]:-

In college he showed signs of his later difficulties in getting along with people: he did not excel in classwork, preferring to read works of his own choosing.

He entered Harvard College in 1855 and graduated four years later with an A.B., continuing to study there at graduate level for a year. By this stage his father, Benjamin Peirce, was working for the United States Coast Survey and Charles began to undertake occasional work for the Coast Survey. In particular he worked for them beginning on 1 July 1859. In 1861 he entered the Lawrence Scientific School at Harvard, where again his father played an important role, and here he seems to have shone much more than in his undergraduate years. He received a Master's degree from Harvard in 1862 and then a Sc.B. with distinction from the Lawrence Scientific School in 1863. On 16 October of that year he married Harriet Melusina Fay who came from a leading Cambridge family and was an active feminist campaigner.

Peirce now undertook a range of different scientific studies. He had studied species classification with Louis Agassiz, a Harvard zoologist. He gave the Harvard lectures on The Logic of Science in the spring of 1865 and the Lowell Institute lectures on The Logic of Science; or Induction and Hypothesis in the latter part of 1866. He was elected to the American Academy of Arts and Sciences on 30 January 1867, then from October 1869 to December 1872 he conducted research in astronomy as an assistant at Harvard Observatory. Throughout this time he continued research in geodesy for the U.S. Coast Survey, and he was sent to Europe by the Survey from June 1870 to March on the following year. He continued to progress through the ranks at the U.S. Coast Survey being put in charge of pendulum experiments in November 1872, then promoted to assistant in December of that year. The main task that Peirce carried out in his geodetic work for the U.S. Coast Survey was to measure the force of gravity at various sites both in the United States and abroad. His other task was to use the data from the results of his experiments to determine the shape of the earth. As part of this work he made further trips to Europe, from April 1875 to August 1876, and again for three months from September 1877. Between these two trips he separated from his wife Melusina in October 1876 and this marked the beginning of a problem which would greatly affect his career.

For a while Peirce's career continued to move forward. He was elected to the National Academy of Sciences (United States) in April 1877 and published the results of his earlier research in astronomy in a book Photometric Researches (1878). Although his work had been wide ranging in the sciences, he had always been interested in philosophy and logic and, in 1879, he was appointed as Lecturer in Logic in the Department of Mathematics at Johns Hopkins University. Sylvester was Head of Mathematics at Johns Hopkins University at this time and for a while things went well for Peirce. He became interested in the Four Colour Problem, and problems of knots and linkages studied by Kempe. He then extended his father's work on associative algebras and worked on mathematical logic, topology and set theory. However by now Peirce was living with Juliette Froissy Pourtalès, a French gypsy. He was divorced from his first wife Melusina on 24 April 1883 and married Juliette six days later. In 1884 Simon Newcomb, who had just been appointed professor of mathematics and astronomy at Johns Hopkins University, reported to the trustees of the university that Peirce had been living with a French gypsy while still married to Melusina. Not wishing to be involved in a scandal, the trustees chose not to renew Peirce's contract. Peirce would never hold another academic post.

Peirce's only steady work was now for the Coast and Geodetic Survey. He went to Washington, D.C. to work on data on gravity measurements which had been returned from the Artic. He moved to New York City in 1886 and continued on his work for the Survey but he became increasingly at odds with his superiors and worked more and more in isolation. The Coast Survey also came under increasing pressure through lack of funding by the government. Peirce moved into a rented house in Milford, Pennsylvania, in April 1887 but after his mother died on 12 October of that year he inherited enough to purchase land and begin building an estate he called Arisbe near Milford. He purchased further land and a farm after he received a small inheritance from a maiden aunt in 1888. When he finally submitted his major report on gravity to the U.S. Coastal Survey in 1890 it was rejected for publication unless he made major revisions. When nothing further was received from him by the end of 1891 the Survey asked for his resignation. Peirce now had no income at all.

During this difficult period in his life his wife was suffering from poor health. She was diagnosed as having tuberculosis in the middle of 1889 and before the end of the year she travelled to Europe in an attempt to recover. Returning to the United States in the spring of 1890, she still was not well and in January of 1891 she underwent surgery. Despite these health problems, which coincided with Peirce's difficulties with the U.S. Coastal Survey, Juliette outlived her husband.

Conspicuous among those who in the early nineties attended the monthly meetings ... was the famous logician, Charles S Peirce. His dramatic manner, his reckless disregard of accuracy in what he termed 'unimportant details', his clever newspaper articles describing the meetings of our young Society interested and amused us all. ... He was always hard up, living partly on what he could borrow from friends, and partly on what he got from odd jobs such as writing book reviews ... He was equally brilliant, whether under the influence of liquor or otherwise, and his company was prized by the various organisations to which he belonged; and he was never dropped from any of them even though he was unable to pay his dues. He infuriated Charlotte Angas Scott by contributing to the New York Evening Post an unsigned obituary of Arthur Cayley in which he stated upon no grounds, except that Cayley's father had for a time resided in Russia, that Cayley had inherited his genius from a Russian whom his father had married in St Petersburg. Shortly afterwards Miss Scott contributed to the Bulletin a more factual, sober article upon Cayley's life and work ...

Peirce today is most famous as a philosopher although it is fair to say that this fame only came late. In 1877 and 1878 Peirce published six essays on Illustrations of the Logic of Science in the Popular Science Monthly. The first two of these essays were The Fixation of Belief and How to Make Our Ideas Clear. It was in the second of these that he set out his pragmatic philosophy for which he is best known today. He wrote:-

Perhaps the single most important fact to keep in mind in understanding Peirce's philosophy is that Peirce was a practicing physical scientist all his life ... When he said that the whole meaning of a (clear) conception consists in the entire set of its practical consequences, he had in mind that a meaningful conception must have some experiential "cash value," capable of being specified as some sort of collection of possible empirical observations under specifiable conditions. Peirce insisted that the entire meaning of a meaningful conception consisted in the totality of such specifications of possible observations.

In fact it was twenty years after he published these ideas on pragmatism that, through the work of William James, Peirce began to gain the credit for his ideas. Peirce lectured on Pragmatism at Harvard in March to May of 1903 and published a series of essays explaining his ideas in The Monist in 1905.

It is impossible to do justice to the breadth of Peirce's philosophical work in this article. Let us just note some further examples. He wrote on infinite sets and infinitesimals and argued for the consistency of introducing infinitesimals into the number system. He wrote on probability arguing against De Morgan's ideas that probability is a measure of confidence and also arguing against the ideas of Bayes. Rather for Peirce probability is the limit of the ratio of observed occurrences over the possible occurrences and the number of observations tend to infinity. He also studied universal categories and for him almost everything split into three categories or triads. On the mathematical side, coming out of his work for the Coast Survey, we mention that he was interested in conformal map projections where he invented a quincuncial map projection using elliptic functions.

We have already indicated that Peirce was a somewhat unusual character. Here is a report of a lecture that Peirce gave to the Harvard Philosophy Club on 21 May 1879 extracted from a letter written by Thomas Davidson:-

Peirce's paper was captious, bright, and poor. After it was over, I had a long talk with Professor Benjamin Peirce, who undertook to prove to me mathematically that space has four dimensions. The Peirce's are all a little crazy, I think.

Other pages about Charles S Peirce:

Other websites about Charles S Peirce: