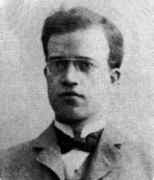 Edvard Phragmén's parents were Lars Jakob Phragmén, a mathematics teacher at the local Gymnasium in Örebro and author of mathematics books, and Hedvig Amalia Fernander. Lars Jakob Phragmén had been born on 11 January 1832 and had studied at the University of Uppsala before becoming a teacher at a school in Stockholm. He became a mathematics teacher at the Gymnasium in Örebro in 1859 and, in 1875, he also took on the role of rector. He retired in 1902. Edvard grew up in Örebro, a town about 200 km west of Stockholm. Following in his father's footsteps, he entered the University of Uppsala in 1882 but, after a year, he began studying at Stockholm where Mittag-Leffler immediately recruited him to work for his journal Acta Mathematica. Phragmén was asked by Mittag-Leffler to study a letter from Édouard Goursat and then discuss Georg Cantor's definition of the continuum with Mittag-Leffler. Phragmén gave a new proof of the Cantor-Bendixson theorem in Beweis eines Satzes aus der Mannigfaltigkeitslehre Ⓣ (1884) and then published significant results on elliptic functions in Sur un théorème concernant les fonctions elliptiques Ⓣ (1885). Also in 1885 he published Über die Begrenzungen von Continua Ⓣ. These three papers were all published in Acta Mathematica, the high quality journal which was edited by Mittag-Leffler. Phragmén became an editor of Acta Mathematica in 1888. He graduated from the University of Uppsala in 1889.

It was proof-reading papers for Acta Mathematica that first brought Phragmén to international recognition. This followed the competition for the Royal Prize, financed by King Oscar II of Sweden, which was announced in Acta Mathematica in 1885. The deadline for submissions was 1 June 1888 and there were four questions, the first of which involved the stability of the solar system and asked for series which describe the motion of bodies in a generalised 3-body problem. Henri Poincaré submitted an entry which the judges, Hermite, Weierstrass and Mittag-Leffler, deemed the best and worthy of the prize. The prize was to be presented by the King in January 1889 and Poincaré's prize-winning contribution began to be set up for printing in Acta Mathematica with Phragmén as proof-reader [1]:-

... Phragmén found one dubious point after another. In December of 1888 he writes: "If the author were not what he is, I would not for a moment hesitate to say that he has made a great mistake here."

Phragmén corresponded with Poincaré who tried to correct the errors. However Phragmén found more problems with the paper and eventually, after the paper had been printed, it had to be withdrawn and completely rewritten by Poincaré. The new version was nearly 100 pages longer than the original. In the revised introduction, Poincaré thanked Phragmen, writing:-

It is he, who in calling my attention to a delicate point, made it possible for me to discover and correct an important error.

In fact one of the points which Phragmén questioned prompted Poincaré to take the first steps in chaos theory. Gårding writes [1]:-

His remarkable proofreading feats gave Phragmén a great reputation. It may be overstated, but his penetrating critical ability became clear to everyone.

Of the greatest value for the editorial work of 'Acta Mathematica' was Phragmén's uncommon ability to analyze and critically examine, and his astuteness in this respect was also evidenced e.g. in the group of works he published in 1890-92 which treat a variety of subjects, often starting with an analysis of older theories. He speaks as critic in such lines as the following which introduce a work in which an argument of Schwarz is revised and corrected: "Most mathematicians would probably not have any objection to this proof. However, there is one point which I find dissatisfying, ..."

Sofia Kovalevskaya died in February 1891 and her chair at Stockholm had to be filled. Mittag-Leffler had two excellent candidates to fill the chair, Phragmén and Ivar Bendixson [1]:-

After careful deliberation Mittag-Leffler found that Phragmén was the best candidate. Nobody at Stockholm University could contradict him.

In 1892 Phragmén obtained a permanent position at Stockholm when he was appointed to succeed Sofia Kovalevskaya. He married Gyda Josephine Mathilde Sohlberg in 1896. She was born in Christiania in 1864, the daughter of Johan Vilhelm Sohlberg (born 1831) and his wife Johanne (born 1837). In 1904 Phragmén resigned his chair at the university and, from that time, he worked for the state run Royal Inspection of Insurance Companies becoming director and head of the department of insurance in the following year. However, he continued in his role as an editor of Acta Mathematica, in fact he continued as an editor until his death in 1937. In 1908 he became director of the private insurance company Allmänna Lifförsakringsbolaget.

The mathematical result for which Phragmén is best remembered today is the Phragmén-Lindelöf principle. Phragmén's first progress towards this was his paper Sur une extension d'un théorème classique de la théorie des fonctions (1904) in which he extended Liouville's result that every entire bounded function must be constant to show that the same result could be obtained for entire functions with controlled growth in a given sector that were bounded outside the sector. Although this paper was an important contribution, the major advance came in a joint paper Sur une extension d'un principe classique de l'analyse et sur quelques propriétés des fonctions monogènes dans le voisinage d'un point singulier Ⓣ of 1908 by Phragmén and the Finnish mathematician Ernst Lindelöf. The breakthrough in this paper came about because in it they generalise Phragmén's earlier result by formulating it as an extension of the maximum principle for the absolute values of analytic functions.

Domar comments in [6] about a later work by Phragmén:-

Another pioneering work of Phragmén was presented at the Scandinavian Congress of 1913. Here the problem is more special, lying within the theory of uniform convergence of trigonometric series. But Phragmén was far ahead of his time, as has been certified by the expert Antoni Zygmund, who rediscovered parts of the theory 26 years later, unaware of Phragmén's paper.

Phragmén had also made an important contribution to voting systems with the publication of two papers Proportional elections (Swedish) (1895) and On the question of a proportional election method (Swedish) (1899). Phragmén's variant on the single transferable vote, proposed in his 1895 paper, was introduced in the Swedish Elections Act as a method of allocating seats within a party. Phragmén was a member of the committee during 1903-03 which prepared the legislation which became law in the Swedish Elections Act. His interest in voting systems in elections had come from a somewhat disastrous episode in attempting to elect a rector of the Mathematics College in December 1894. There was a dispute over which mathematics lecturers were eligible to vote, some feeling that only the professors should vote. All were invited to vote in the December election but, because of the dispute, Mittag-Leffler, Bendixson and Phragmén abstained. Pettersson was elected but declined to accept the post. A second election was held at which only professors voted (after a lengthy argument with the docent who eventually left the meeting with Pettersson) and Phragmén was elected rector. However, this vote was later declared invalid and yet another vote was held at which Pettersson was elected rector.

Harald Cramér comments in [5] about Phragmén's character. Phragmén was:-

For many years he was President of the Swedish Society of Actuaries taking up that role in 1909. He was a member of a large number of Swedish and foreign academies and scientific societies. From 1927 until his death he was president of the council of the Mittag-Leffler Institute.
Other Mathematicians born in Sweden
A Poster of Edvard Phragmén

Other websites about Edvard Phragmén: