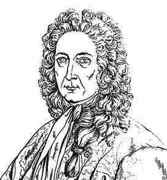 Giovanni Poleni's father was Jacopo Poleni who was given the title of marquis of the Holy Roman Empire by Emperor Leopold I. Giovanni inherited his father's title. As a young man Poleni showed brilliance in a wide variety of different subjects and it was clear that he was extraordinarily talented. He first studied philosophy and then theology in Venice. His parents encouraged him to begin a judicial career but, after being introduced to mathematics and science by his father, it was clear that he had now found the subjects which gave him most satisfaction

In 1708 he married Orsola Roberti who was from the high ranking Bassano del Grappa family. He accepted the chair of Astronomy and Meteorology at the University of Padua in 1709. For over 40 years he kept outstandingly accurate meteorological records which have proved invaluable to later scientists. He published Miscellanea: de barometris et thermometris; de machina quadam arithmetica; de sectionibus conicis in horologiis solaribus describendis Ⓣ, a collection of dissertations on physics, in 1709. As well as studying the barometer and thermometer, this work includes Poleni's description of a calculating machine [1]:-

... based on reports that Poleni had received of those of Pascal and Leibniz. Poleni actually built this machine which was reportedly very simple and easy to operate; but when he heard of another machine presented to the Emperor by the Viennese mechanician Brauer, he destroyed his own and never rebuilt it.

In 1715 he became professor of physics, in addition holding the chair of Astronomy and Meteorology. Poleni was invited by the Venetian Senate to investigate the problem of hydraulics relating to the irrigation of Lower Lombardy. The river Adda leaves Lake Como at Lecco and crosses the Lombardy Plain where skilled engineering can use it to create excellent irrigation. But Poleni had also to worry about the river flooding, so his irrigation schemes had to have constructions to control floods. He was appointed to the chair of mathematics at Padua in 1719 which had been vacated by Nicolaus (II) Bernoulli. His inaugural lecture was De physices in rebus mathematicis utilitate: praelectio Ⓣ which was particularly significant and, although published first in 1716, it was reprinted in 1720 after his inaugural lecture. A major treatise on hydraulics and hydrodynamics De motu aquae mixto libri duo Ⓣ (1717) describes estuaries, ports, and rivers. A year later, in 1718, he reported on his experiments with water in De castellis per quae derivantur aquae fluviorum habentibus latera convergentia liber Ⓣ.

In fact Padua had been fortunate to have had Jakob Hermann teaching there from 1707 to 1713 and he had introduced the methods of Leibniz's differential and integral calculus to the university. Poleni was familiar with the new differential and integral calculus and with the natural philosophy of Newton. A fascinating glimpse of the topics which interested Poleni are seen from his correspondence with Jacopo Riccati who was also based in the Venetian region. This correspondence is reproduced in [4]. The two mathematicians discussed: the application of calculus to some controversial issues in dynamics; hydraulics; and administrative matters related to the regulation of waters in the Venetian region. The topics which Poleni taught at the University of Padua reflect his interests and the different chairs to which he was appointed. He taught physics when he was first appointed but taught mathematics after his appointment to the chair of mathematics in 1719. He observed a solar eclipse in 1724 and wrote a treatise on the topic which was published in the following year. From 1739 he taught experimental physics, since by this time he had available a physics laboratory. We shall look at this innovation in a little more detail.

In 1738 Poleni acquired a laboratory to conduct physics experiments: his Teatro di Filosofia Sperimentale. It was the first physics laboratory to be established in an Italian university. From the time he acquired the laboratory he sought to stock it with instruments. He collected about 400 mathematical, drawing and meteorological instruments over the following twenty years. Some were purchased but most were made in Venice or Padua to Poleni's own specifications. Around 100 of Poleni's instruments still survive and can be seen in a Museum at Padua. This laboratory gained Poleni international fame. He was elected to the Académie des Sciences in Paris in 1739. The Academy recognised that he had:-

... placed the School of Natural Philosophy in Padua on the same level as the most famous of its kind.

I have never seen a more beautiful Physics Laboratory.

Pope Benedict XIV summoned Poleni to Rome in 1743 to see if he could solve the problem of the cupola of St Peter's which seemed to be near to collapsing. Together with the architect Luigi Vanvitelli he proposed fitting large iron rings to strengthen the dome. In fact the task was carried out with the aid of an instrument from Poleni's laboratory, a macchina divulsoria designed to determine the tensile strength of materials. The rings were fitted by 1748. As a consequence of this task, he published Memorie istoriche della gran cupola del Tempio Vaticano Ⓣ in 1748. (In fact the pope also accepted advice from Boscovich who made the same suggestion.)

Poleni was appointed to the chair of Nautical Studies and Naval Construction at Padua in 1756. From this time he taught nautical sciences and shipbuilding.

In addition to the many different interests we have indicated above [12]:-

Poleni's scientific activities were paralleled by classical researched, which were described in treatises on the temple of Ephesus, on ancient theatres and amphitheatres, on French archaeological findings, on an Augustan obelisk, and on several architectural topics.

Another interest which gave him great pleasure was music.
Other Mathematicians born in Italy
A Poster of Giovanni Poleni

Other websites about Giovanni Poleni: