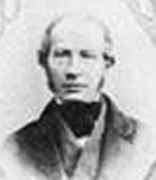 Joseph Raabe's first name is often written as 'Josef' while his second name is sometimes written as 'Rabe'. Since his parents were poor, Raabe did not have the educational opportunities as a young boy so he had to learn mathematics largely working on his own. He was a very able young lad and was well able to earn a living as a private tutor of mathematics while he himself studied more advanced topics. By the age of nineteen, he had made enough from tutoring to travel to Vienna where he continued to fund himself by giving private tuition but, at the same time, he was able to study mathematics at the Polytechnikum.

The first cholera pandemic to hit Europe started in 1829 in Moscow and St Petersburg and, over the next couple of years, spread through Poland, Germany and Austria. The disease was a major killer and spread panic through the population of the cities that it reached. By the autumn of 1831 it had reached Vienna and Raabe had no option but to stop giving his private mathematics lessons. He wanted to go to Munich and habilitate at the University there but he had a good friend in Vienna, the astronomer and geodesist Johannes Eschmann (1808-1852), who persuaded him to go instead to Zürich. Eschmann was Swiss, growing up as orphan in Winterthur, and had studied mathematics, astronomy and geodesy in Zürich, Paris and Vienna. He was studying under Johann von Littrow in Vienna when he became friends with Raabe. Eschmann and Raabe went to Zürich and Raabe found a home there and a position teaching mathematics at the Gymnasium. In 1833 the University of Zürich was founded by J K Orelli, and Laurenz Oken was appointed as its first rector. They made two inspiring appointments as privatdocent in mathematics, Gräffe and Raabe. Johannes Eschmann, Raabe's friend, was appointed to a similar position in astronomy.

Today Raabe's name is mostly remembered for Raabe's Test for convergence of series. This test appears in Raabe's paper Note zur Theorie der Convergenz und Divergenz der Reihen Ⓣ which was published in Volume 11 (1834) of Crelle's Journal. In fact Raabe did not publish any papers in Crelle's Journal after those we mentioned above in the first two volumes until this 1834 paper. He had published another paper on series while still in Vienna, however, namely Über Reihen, deren Differenzenreihen wiederkehren Ⓣ (1829). The 1834 paper contains the famous Raabe's Test:
Suppose (an​) is a sequence of positive terms and suppose that

In 1836 the University of Zürich appointed a professor of mathematics but the chair was not given to Raabe but rather to Anton Müller, a somewhat undistinguished mathematician. Not only was Raabe passed over, but so was his fellow docent, the talented Karl Heinrich Gräffe. Over the following years, Müller published no research of any merit while both Raabe and Gräffe continued to produce highly significant contributions. Raabe's work on the Bernoulli polynomials deserves special mention. He wrote two major papers, a 52-page one in 1848 entitled Die Jacob Bernoullische Function Ⓣ and a 30-page paper Zuruckfuhrung Einig Summen und auf die bestimmten Integrale Jakob Bernoullische Function Ⓣ published in 1851. The term "Bernoulli polynomials" was introduced by Raabe in this paper of 1851. We should also mention the important 3-volume treatise Differential- und Integralrechnung Ⓣ (Zürich, 1839-47) which can still be purchased today, and the 2-volume Mathematischer Mittheilungen Ⓣ (1857-58). He also published Was ist der Gegenstand der Mathematik? Ⓣ in 1853.

In 1855 the Eidgenössische Polytechnische Schule was founded in Zürich (this institution was, in 1911, called the Eidgenössische Technische Hochschule or the Swiss Federal Institute of Technology). Raabe was appointed as a professor at the Eidgenössische Polytechnische Schule in the year of its founding, but he did not hold this chair for long since he left his chair in 1858 and died in January of the following year at the age of 57 years. Richard Dedekind applied for Raabe's chair and was appointed in the spring of 1858, taking up the chair in the autumn of that year.
Other Mathematicians born in Ukraine
A Poster of Joseph Raabe

Other websites about Joseph Raabe: