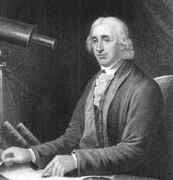 David Rittenhouse's parents, Elizabeth Williams and Matthias Rittenhouse, were farmers near Germantown, at that time a separate town close to Philadelphia. William Rittenhouse built the first paper mill in the British colonies in Germantown in 1690. David showed great promise as a child, particularly displaying a talent for constructing mechanical models and showing considerable mathematical skills. When he was eight years old it is recorded that he built a model of a water mill. Bedini writes in [2]:-

He was fascinated with mathematics from his early years but, with little opportunity for schooling, was largely self-taught from books on elementary arithmetic and geometry and a box of tools inherited from an uncle, David Williams.

He also read more advanced works, in particular an English translation of Newton's Principia. Rufus, in [4], sees Rittenhouse as a mathematical disciple of Newton. Rittenhouse began to construct clocks, making a wooden one when he was seventeen, then a brass one a little later. By 1751 he had opened a shop on a road that ran through his father's farm where he sold clocks, mathematical instruments and mechanical models of the solar system. Of course Rittenhouse lived through a difficult period with much of the fighting during the French and Indian War from 1754 to 1763 taking place in Pennsylvania. Despite this he began to construct astronomical instruments in 1756. He married Eleanor Coulston in 1766; they had two children.

Rittenhouse was elected to the American Philosophical Society in 1768 and, based on calculations which he made, the Society made plans to observe the transit of Venus which was calculated to take place in 1769. The plans consisted of setting up observatories on three sites from which observations would be made. Rittenhouse built one of these observatories at his home as well as constructing most of the astronomical instruments to be used in it. It is believed that he made the first telescope in the United States as one of these instruments [1]:-

During this transit [Rittenhouse] observed that Venus has an atmosphere. His findings were similar to those of the Russian scientist Mikhail Vasilyevich Lomonosov, who had identified Venus's atmosphere during a transit in 1761. Though both had written about their observations, neither report was published or publicised for more than a century.

Rittenhouse continued to do excellent business from his shop where he made steady sales of surveying instruments. However his wife tragically died in childbirth in 1770 and in that year he moved permanently to Philadelphia. In fact two years later he remarried, this time to Hannah Jacobs. There was one child from this second marriage which died while an infant.

Not only did Rittenhouse have an outstanding reputation as the maker of surveying instruments, but also his expertise as a surveyor was very evident and he was in great demand in a land where borders were being defined and boundaries being surveyed. Rittenhouse served as City Surveyor of Philadelphia in 1774. However as the American Revolution approached, Pennsylvania became a centre of military, economic, and political activity, and Rittenhouse began to play an important role. A Continental Congress was formed which met in Philadelphia in September 1774 with a Second Continental Congress met, also in Philadelphia, in May 1775. With outstanding expertise in mechanical inventions, Rittenhouse was soon involved in organising the manufacture of armaments such as cannon and ammunition, chains to fortify the harbour, as well as gunpowder. The American Revolution began in Pennsylvania, where a strong radical party seized power. The Congress recommended that colonies form their own governments and assigned a committee to draft a declaration of independence. Rittenhouse was, during this period, a member of the Pennsylvania General Assembly. He also served on the Board of War and was state treasurer from 1779 to 1787. However he was also involved in academic affairs, being appointed to the Board of Trustees of the University of Pennsylvania in 1779. He was professor of astronomy at the University during 1780-81.

The fighting of the Revolution was over by 1782 and the Treaty of Paris of 1783 provided a formal peace treaty. Following this, Rittenhouse again became involved in surveying the boundaries of Pennsylvania. He had published works on astronomy throughout his life but only in the second half of the 1780s did he turn his attention to scientific topics such as magnetism, publishing An account of some experiments in magnetism in 1786. Although he had been interested in mathematics from a young age, Rittenhouse only began to publish mathematical works in the 1790s. He published A method of finding the sum of several powers of the sines in 1793 and in a paper of 12 August 1795 he gave an expansion of log10​n, where n a positive number, as a simple continued fraction and then computed log10​99 to nine decimal places. This work was not new in the sense that had he known of Taylor series published in 1717 he could have deduced his results easily. However the papers are important in that he and Franklin were the only two mathematicians of any significance in the United States in the 18th century.

Rittenhouse was long associated with the American Philosophical Society and we noted above that he was elected to this Society in 1768. In fact the Society came into existence in 1743 following Benjamin Franklin's Proposal for Promoting Useful Knowledge Among the British Plantations in America. Franklin also founded the American Society and the two Societies combined in 1769 following which Franklin was elected president. He continued to hold this position until his death in 1790. During these years Rittenhouse played a leading role in the Society, as librarian, as secretary, and as vice-president. He also served on many of the committees set up by the Society. After Franklin's death Rittenhouse was elected the second president and served in this capacity until his own death.

He received many honours in the last years of his life. George Washington made him the first director of the U.S. Mint in 1792. In 1795 he was elected a fellow of the Royal Society of London. Bedini writes [2]:-

Next to Franklin, Rittenhouse was the leading figure in eighteenth-century American science. His achievements reflect an unusual combination of theory and practice; while his major contributions were primarily observational and experimental, his name has become synonymous with precision instruments.

Rittenhouse had suffered poor health during most of his life and he died at home.
Other Mathematicians born in USA
A Poster of David Rittenhouse

Other websites about David Rittenhouse: