Born
15 December 1827
Horncastle, Lincolnshire, England
Died
18 Sept1913
London, England
Summary
Samuel Roberts was an English mathematician who was an important participant in the founding of the London Mathematical Society. 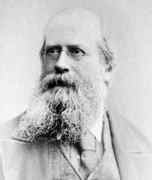 Samuel Roberts was educated at Queen Elizabeth's Grammar School in the town of his birth. In 1844 he entered Manchester New College and, the following year, he began his studies at the University of London. He graduated in mathematics with a BA in 1847, then two years later he was placed first in the examinations for his MA in mathematics and physics.

After this he studied law, becoming a solicitor in 1853 in Lincoln. However his love of mathematics made him give up law after a few years, and he returned to London to take up his mathematical studies for a second time. In fact he had published mathematical papers from 1848 but, after the London Mathematical Society was founded in early 1865, Roberts could join in discussions with other mathematicians for he had no mathematical post. As Glaisher write in [1]:-

He was simply a private gentleman who pursued researches from pure love of investigation and desire to extend the boundaries of subjects that were attractive to him. And he never sought any recognition of his work; for him it was entirely its own reward.

Robert's interests in mathematics were wide ranging. Glaisher, writing in [1], describes Roberts' contributions to mathematics as:-

... numerous and valuable, and they covered a somewhat wide range. Among the subjects to which his principal papers related were plane and solid geometry, theory of numbers, and link motion. He also wrote on the calculus of operations, interpolation etc. His writings on geometry included several important papers on parallel curves and surfaces. In theory of numbers he was interested in the Pellian equation and similar problems.

Glaisher also records in [1] an interesting comment which Cayley made to him concerning Roberts. Cayley said that he regretted that joint papers were so rare in mathematics since he would have liked to have collaborated with Roberts, particularly on ideas which arose from Roberts' paper On the motion of a plane under given conditions.

The greatest honour given to Roberts was his election as a Fellow of the Royal Society in 1878.
Other Mathematicians born in England
A Poster of Samuel Roberts

Other websites about Samuel Roberts: