Born
19 February 1866
Montgomery City, Missouri
Died
4 July 1962
Oakland, California, USA
Summary
T J J See was an American astronomer who studied in the University of Missouri and in Berlin. He fell out with his astronomical colleagues and was eventually banned from publishing. He spend the last part of his life arguing against Einstein's Theory of Relativity. 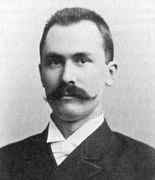 The start of See's career at the University was inauspicious. The scholastic record shows he began mathematics poorly, although his subsequent grades in mathematics, science and most other subjects were excellent.

Joseph Ficklin, the Professor of Mathematics at the University of Missouri, encouraged See to spend time at the Laws Observatory and he undertook work there during the summer vacations in 1887 and 1888. See graduated from Missouri in 1889 and went to Germany to undertake research. Sheehan writes [4]:-

... [in Germany] he studied with the best, including the famous experimental physicist Hermann Helmholtz. He received a doctorate in astronomy from the University of Berlin. His fellow students considered him "a very capable fellow in some directions, but ... very peculiar."

He was awarded a doctorate from the University of Berlin in 1892 and returned to the United States to take up a position at the new University of Chicago.

See's initial appointment at Chicago was as an Instructor, working under George Ellery Hale. The expected promotion never came and See left Chicago in 1896 to take up an appointment at the Lowell Observatory. While at Chicago, See had made a study of the binary star system 70 Ophiuchi and from anomalies in the orbits had deduced a presence of a third star in the system. He published his findings in The Astronomical Journal (1896) in a paper entitled Researches on the orbit of 70 Ophiuchi, and on a periodic perturbation in the motion of the system arising from the action of an unseen body. This would lead See into major difficulties as we explain below.

At Chicago See had poor relations with his colleagues and this was, if anything, somewhat worse at the Lowell Observatory. See is now seen as a tragic figure, even a comic one by some authors, yet others felt that he was somewhat hard done by. For example Esa Ruoho writes:-

It has been said that See had the unfortunate tendency "to come on too strongly" with his theories which was usually interpreted by his astronomer colleagues as being "arrogant egotism" rather than "studied conviction" which it apparently was.

... co-workers and superiors appear to have been repelled by See's intense egotism, his inability to work with others, his refusal to operate within established codes of conduct at each institution, and questions arising from both the source and the reliability of his scientific work.

To indicate that See was in fact an outstanding observer let us note that while at the Lowell Observatory he used the 24" telescope to observe the star known as HDS3147 which he claimed was a double star with the angle between the components being 308.3° and the separation being 0.2". He published the result in The Astronomical Journal and it was only after the Hipparchus satellite measured the binary in 1997 at 303.0° and 0.226" that See's old paper was noticed and the accuracy of his observations (which had been essentially ignored) were realised.

See was dismissed from his position at the Lowell Observatory in 1898 and, in the following year, appointed to the United States Naval Observatory in Washington D.C. In 1899, F R Moulton published The limits of temporary stability of satellite motion, with an application to the question of the existence of an unseen body in the binary system 70 Ophiuchi in The Astronomical Journal. This paper showed that the triple star system postulated by See in his 1896 paper could not exist as the orbits would not be stable. See reacted by writing an abusive reply which, after editing The Astronomical Journal published as Remarks on Mr Moulton's paper in A.J. 461. This was to be See's last publication in The Astronomical Journal for, following this incident, he was banned from publishing further. In 1902 See suffered a nervous breakdown and, after teaching for one semester at the United States Naval Academy, he was transferred to a naval shipyard at Mare Island, California:-

While at Mare Island, isolated and alone, See did a little more work in binary stars. However, in this case his work was in the calculation of orbits not their observation .... Most of his work continued to get more eccentric as he worked on his theory of the Aether and one might imagine him feeling marginalized.

In 1913 William Larkin Webb published Brief Biography and Popular Account of the Unparalleled Discoveries of T J J See. Webb was an amateur astronomer and newspaper publisher, but many regard the work as having been written by See himself. The Nation reviewed the book and took the opportunity to ridicule See:-

The infant See, we are told, first saw the light on the 393rd anniversary of Copernicus's birth, ... [and] showed himself "every inch a natural philosopher" by speculating on the origins of the sun, moon and stars at the tender age of two, never so much as dreaming that he should grow into a little boy with "methodical methods", and one day become "the greatest astronomer in the world".

In December 1916 See joined the Edinburgh Mathematical Society, giving his address as Professor of the U.S. Naval Observatory, Mare Island, California. He spent much effort in his later years arguing against Einstein's theory of relativity.
Other Mathematicians born in USA
A Poster of T J J See