Born
15 July 1898
Sheffield, England
Died
26 May 1984
Malvern, England
Summary
Mary Taylor Slow was a British mathematician and physicist who worked on the theory of radio waves and the application of differential equations to physics. 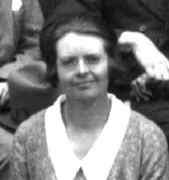 Mary Taylor's parents were both school teachers. She attended Pomona St Elementary School in Sheffield before continuing her education at Sheffield high School. While at the school she won a Clothworker's Scholarship which allowed her to study at Girton College, Cambridge.

Taylor was awarded a BA by Cambridge in 1919, having obtained the equivalent of a First Class degree. She continued to study the Natural Science Tripos which she completed in 1920 after taking courses in both mathematics and natural science. She continued to study at Cambridge and was awarded a research fellowship. In 1922 she was appointed as an assistant lecturer in mathematics at Girton College, a post she held for two years. As well as teaching mathematics, Taylor became interested in the theory of radio waves and began research on the topic under the direction of Edward Appleton who was at this time working at the Cavendish Laboratory in Cambridge.

In 1924 Appleton left Cambridge to become the Wheatstone professor of physics at King's College, University of London. Taylor left Cambridge and went to Göttingen in Germany where she continued to study aspects of electromagnetic waves. She was awarded her doctorate by the University of Göttingen in 1926 and was awarded a Yarrow Research Fellowship which enabled her to remain at Göttingen undertaking research with Courant. Taylor returned to England in 1929 and was appointed as a Scientific Officer at the Radio Research Station in Slough, Berkshire. The Radio Research Station was part of the government Department of Scientific and Industrial Research and of the National Physical Laboratory. There she carried out research on her specialist topics of the magneto-ionic theory of radio wave propagation and also in differential equation, particularly their applications to physics.

In 1934 Taylor married Clive Slow and as a consequence had to leave her position at the Radio Research Station under the Civil Service rules which were in force at that time. Mary and Clive Slow had two daughters. She worked for the Wireless Engineer as an abstractor and translator. She moved with her husband to Malvern when he was appointed to a post in the Air Defence Research and Development Establishment. Mary Slow then taught mathematics in local schools, in particular Worcester Grammar School for Girls, and Lawnside, Malvern. She was a member of the London Mathematical Society and the Cambridge Philosophical Society. She published a number of papers in the Proceedings of the Physics Society.
Other Mathematicians born in England
A Poster of Mary Taylor

Other websites about Mary Taylor: