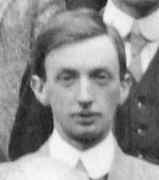 William Watson attended his father's school from 1891 to 1898 and then proceeded to the Royal High School, Edinburgh. He excelled at the school and, after coming top in Latin, Greek and Mathematics in every class he took, he completed his school education in 1902 being the dux and gold medallist. He passed the Leaving Certificate examinations in Higher French in June 1901, then in Higher Latin, Greek, Mathematics, English, and Dynamics in June 1902. After having passed the Preliminary Examination, he first matriculated at Edinburgh University in October 1902.

At first Watson decided to study classics at Edinburgh University and it was only part way through his studies that he changed topics to mathematics and natural philosophy. In his first year he took the Ordinary classes in Latin and Greek but he certainly did not change course because of poor results since he achieved 75% in both coures. In his second session, 1903-04, he took the Ordinary classes in Mathematics, Education, and Natural Philosophy. His performance in Mathematics was outstanding with a score of 105% [it was possible to get more than 100% since candidates were not limited in the number of questions they could attempt]. Between October 1904 and April 1906 he took Honours courses in Mathematics and Natural Philosophy. The topics in the Natural Philosophy part of the course included Heat, Light, Electrostatics, and Wave theory.

He graduated with an M.A. with First Class honours in Mathematics and Natural Philosophy in 1907, followed by a B.Sc. with distinction in physics in 1908. Before taking the B.Sc. Watson was already employed as assistant in the Physical laboratory in Edinburgh. After two years in this position he went to the University of Leipzig where he undertook research in physics. Family circumstances led to him returning to Edinburgh and he completed further research there.

He decided to make a career in school teaching and took his Schoolmaster's General Diploma at the Provincial Training College. He was appointed as Head of the Physics Department at Heriot-Watt College in 1912. He continued to hold this post until he retired in 1944.

William Watson joined the Edinburgh Mathematical Society in December 1913, in the year after he took up his post at Heriot-Watt College. He was elected to the Royal Society of Edinburgh on 5 March 1923, his proposers being Francis Gibson Baily, Henry Briggs, Alfred Archibald Boon, Arthur Pillans Laurie.

An obituary, written by J Cameron Smail, appears in the Royal Society of Edinburgh Year Book 1953, pages 50-52.
We give a version of this obituary at THIS LINK.
Other Mathematicians born in Scotland
A Poster of William Watson

Other pages about William Watson: