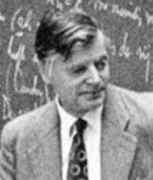 Adriaan Cornelis Zaanen was known as Aad. His parents were Pieter Zaanen and Ariaantje de Bruin. Aad Zaanen was brought up in Rotterdam where he attended the secondary school (hogere burgerschool). He graduated from the school in 1930, achieving the distinction of being ranked as the second best pupil in the whole of The Netherlands. For this achievement he received a scholarship which enabled him enter the University of Leiden to study mathematics. As a student, he came into contact with the ideas of modern analysis via Zygmund's book on trigonometric series and Banach's book on linear transformations. After completing a first degree in Mathematics and Physics in 1935, Zaanen continued his studies at Leiden undertaking research with Johannes Droste as his advisor. He was awarded his doctorate in 1938 for his thesis Over reeksen van eigenfuncties van zekere randproblemen Ⓣ. In this thesis he studied the theory of the Sturm-Liouville two boundary value problem [1]:-

After completing his doctoral studies, Zaanen became a secondary school teacher in Rotterdam, teaching mathematics. He also was very actively involved in research despite the difficult conditions in the Netherlands which existed from 1940 when the German army overran the country and it was run by the German Occupying forces. During the war years he published papers such as On some orthogonal systems of functions (1939), A theorem on a certain orthogonal series and its conjugate series (1940), On some orthogonal systems of functions (1940), Über die Existenz der Eigenfunktionen eines symmetrisierbaren Kernes Ⓣ (1942), Über vollstetige symmetrische und symmetrisierbare Operatoren Ⓣ (1943), Transformations in Hilbert space which depend upon one parameter (1944), and On the absolute convergence of Fourier series (1945). Even more important was [1]:-

... his study of the theory of linear integral equations. Inspired by Marshall H Stone's book 'Linear Transformations in Hilbert space' he was able to extend the classical results of the theory of the linear integral transformations to the domain of the Orlicz spaces of measurable functions. The results appeared in 1946 and 1947 in a series of seven papers in the Proceedings of the Royal Academy of Sciences of The Netherlands.

Zaanen married Jacoba (Ada) van der Woude in 1943; they had four sons. He continued as a secondary school teacher of mathematics in Rotterdam until 1946 when he moved to Delft where he taught for the year 1946-47 at the Technische Hogeschool Delft (now the Technische Universiteit Delft). Then in 1947 he was appointed as Professor of Mathematics at the University of Bandoeng. Now Bandoeng is the capital of Jawa Barat province in Indonesia which was at that time called the Dutch Indies. The city was founded in 1810 by the Dutch who set up the prestigious Bandoeng Institute of Technology as a college of architecture and engineering. It became the faculties of mathematics and of the natural and applied sciences of the University of Bandoeng, now part of the National University of Indonesia. During three years in Bandoeng he was occupied with writing the functional analysis text Linear analysis. Measure and integral, Banach and Hilbert space, linear integral equations (1953) which contained much of his own research as well as material from a lecture course by N G de Bruijn. B Sz-Nagy ends his review of the book as follows:-

The exposition is always clear and readable. The book is a valuable contribution to the growing literature of textbooks on Functional Analysis. Its main feature is the emphasis laid on integral equations and especially on those with symmetrizable kernel, a domain of research in which we owe to the author many personal results.

After three years in Indonesia, Zaanen returned to the Netherlands where he was appointed as Professor of Analysis in the Technical University of Delft in 1950. He remained at Delft for six years until he returned to the University of Leiden in 1956. He held the Chair of Mathematics at Leiden from 1956 until he retired in 1982. To mark is retirement a symposium From A to Z was held in his honour at Leiden on 5-6 July 1982. The proceedings of the symposium were published later in 1982. We quote from the Preface [7]:-

'From A to Z' is of course a play with Zaanen's initials. On the other hand it reflects Zaanen's mathematical career over more than forty years. During this period Zaanen made essential contributions to several parts of mathematics, mainly in functional analysis, integration theory and Riesz space theory. Through these four decades Zaanen established his own school of thought with its centre of gravity in Leiden and with its representatives abroad.

When he retired Zaanen gave the address Looking back: farewell lecture at the University of Leiden on 3 December 1982. Although this may appear unusual, in fact it is a tradition in the Netherlands that a University Professor upon his retirement gives a farewell address. The lecture, given in Dutch and published by the Nieuw Archief voor Wiskunde [8], gives a fascinating insight into Zaanen's career and the state of affairs of mathematics in the Netherlands, particularly at the University of Leiden, during the middle half of the 20th century.

An important contribution by Zaanen was the texts that he published. The first, Linear analysis. Measure and integral, Banach and Hilbert space, linear integral equations (1953), we have already mentioned above. Next came An introduction to the theory of integration (1958). T H Hildebrandt begins a review as follows:-

This book is a presentation in textbook form of the modern approach to the theory of integration, not however after the manner of Bourbaki, but based on measure theory of abstract sets in the Caratheodory manner, combined with the general integral concepts due in the first place to P J Daniell, and elaborated and extended by M H Stone.

Zaanen himself writes in the Preface:-

I have sailed an intermediate course between the measure approach and the linear functional approach, fully realizing the danger that the attempt to do so may not find favour in the eyes of the extreme adherents of either school.

In 1967 Zaanen published a completely revised and extended edition of An introduction to the theory of integration under the title Integration. The original book contained around 250 pages, but the new edition contained over 600. Then in 1971, in collaboration with W A J Luxemburg, he published Riesz spaces. Vol. I. S J Bernau writes in a review:-

This book is Volume I of a comprehensive two-volume account of the theory of Riesz spaces, or vector lattices. The authors have impeccable credentials for this task. Their series of sixteen notes (all published in the Nederl. Akad. Wetensch. Indag. Math. from 1963 to 1965) did much to bring the theory to its present state of development. ... The authors have achieved their aim. This is undoubtedly the book to consult for an exhaustive treatment of its topics. Results are carefully stated with minimal hypotheses and relevant related material is presented in detail. Links with pure lattice theory and ring theory are also explored.

The monograph Riesz spaces II was published in 1983, with Zaanen as the single author. A C Thompson writes:-

The first volume of this two-volume work appeared in 1971 ... at which time the second volume - dealing with the more analytic parts of the subject - was promised. Though the general outline of the volume may still be as was planned at that time, there must have been a great deal of rethinking of the internal relationships of the chapters and the details of each section, for this book is very up-to-date.

In 1989 Zaanen published Continuity, integration and Fourier theory. His final book Introduction to operator theory in Riesz spaces was published in 1997.

Finally we note that he was the editor of Nieuw Archief voor Wiskunde from 1953 until his retirement in 1982. When he retired he was honoured by being made a Knight of the Order of the Dutch Lion. In 1988 he was elected as an honorary member of the Wiskundig Genootschap (Dutch Mathematical Society).
Other Mathematicians born in Netherlands
A Poster of Adriaan Cornelis Zaanen

Other websites about Adriaan Cornelis Zaanen: