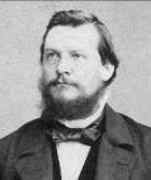 Georg Zehfuss was the son of Johann Heinrich Zehfuss, Court Chamber-Registrar, and Susanne Magdalene Noack. He attended the Höhere Gewerbeschule Darmstadt, the higher trade school which was founded in 1836. Günter Kern writes [2]:-

As Zehfuss himself admits, in his youth he showed more interest in languages and history than mathematics. At the age of fifteen, he entered the Polytechnic in Darmstadt, where he devoted himself to the study of mathematics, mechanics, physics and chemistry, encouraged by his teacher Strecker, but continued to attend classes in Latin, French as well as German history and literature.

The Polytechnic which Kern mentions in this quote is actually the Höhere Gewerbeschule Darmstadt which was renamed the Polytechnic School in 1868, many years after Zehfuss had completed his studies there. At the Gewerbeschule, Zehfuss took classes in mathematics, technical drawing, physics and chemistry. He would also have learned practical skills required for the study of engineering topics. Among his teachers at this school we mention Edmund Külp (1800-1862) who had been inspired to study mathematics by Adolphe Quetelet at the Athenaeum in Brussels. Külp had studied at the University of Heidelberg and was awarded a doctorate by the University of Giessen in 1824. In his first years at the school Zehfuss was taught chemistry by Adolph Strecker (1822-1871) but Strecker left in 1846 to take up an appointment at the University of Giessen. Another of Zehfuss's teachers was Ludwig Christian Wiener who was appointed to the Höhere Gewerbeschule in 1848 and taught physics, mechanics, hydraulics and descriptive geometry. Zehfuss graduated "summa cum laude" from the Höhere Gewerbeschule Darmstadt in 1850 and began his studies of mathematics at the Justus Liebig University of Giessen.

For a list of Zehfuss's publications, see THIS LINK.

Zehfuss completed his studies in Giessen on 31 January 1853 when he obtained a doctorate and qualified to teach in a Gymnasium. Although he performed well at Giessen, he did not find the university mathematically stimulating. After graduating, he obtained a temporary teaching position at the Gewerbeschule Darmstadt where he assisted his former teacher Edmund Külp teaching mathematics and physics from 1853 to 1858.

... with difficult parts of the subject that are only accessible to the more advanced mathematicians.

Kirchhoff also praised the physics section which was on the theory of thermodynamics.

Otto Hesse had been appointed to the chair of mathematics in University of Heidelberg in 1856. He had made investigations into the theory of determinants while undertaking research on invariant theory and he inspired Zehfuss to work on determinant theory. Zehfuss published his first work on this topic in 1858 with three papers appearing in that year, namely: Über die Zeichen der einzelnen Glieder einer Determinanten Ⓣ; Über eine gewisse Determinante Ⓣ; and Kommentar des Buches von Richard Baltzer "Theorie und Anwendungen der Determinanten mit Beziehung auf die Orginalquellen" Ⓣ.

In the first of these papers Zehfuss proves a rule stated by Gabriel Cramer about the change in the signs of determinants. In the second of the papers he proves a rule about the tensor product of square matrices. Some authors believe that the tensor product, often called the Kronecker product, should be called the 'Zehfuss product'. Note that we have made a subtle change from 'determinant' to 'matrix'. Early work on matrices was given in terms of determinants. See below for quotes about the 'Zehfuss product'. In the third of the papers he gives a detailed analysis of the book by Richard Baltzer. This book contains many illustrative references to the original sources of determinant theory and their applications.

Zehfuss worked as a docent at the University of Heidelberg for four years between 1857 and 1861. During these years he taught arithmetic, algebra and geometry, differential calculus, theory of definite integrals, elliptic functions, theory of higher equations, analytical geometry of the plane and of 3-space, and analytical mechanics. On 11 July 1861 Zehfuss married Louise Stein (1838-1911).

In November 1861 Richard Dedekind left the Polytechnikum in Zürich after three years there and took up a position in the Brunswick Polytechnikum. Zehfuss applied for the vacant position in Zürich but it was offered to Rudolf Lipschitz. He, however, turned down the position and it was then offered to Elwin Christoffel. Zehfuss, unable to find a permanent position in Germany, accepted the post of high school professor of mathematics and physics in Reval (now Tallinn in Estonia) in September 1860. He taught at the Cathedral School in Reval and while there his son Gustav Heinrich Julius Wilhelm Zehfuss was born on 20 August 1862. However, Zehfuss was not very happy at the Cathedral School in Reval since he did not feel that this offered him the environment to reach his full potential as a researcher.

In February 1862 Zehfuss applied for a position as a professor in mathematics or physics at the Polytechnic of Riga in Latvia. His application included recommendations from many mathematicians including Ludwig Christian Wiener, Ferdinand Minding, Osip Ivanovich Somov, Oskar Schlömilch, Otto Hesse, Gustav Kirchhoff and Richard Dedekind. Zehfuss was appointed and took up the position as professor of higher mathematics at the Polytechnic of Riga on 9 January 1863. This was a new institution and initially it struggled to establish itself. Zehfuss decided to return to Germany when offered a position at the Gewerbeschule in Frankfurt am Main. He took up the position in 1864. At this school he taught algebraic analysis, trigonometry, the theory of higher degree equations, two dimensional analytic geometry, mechanics, differential and integral calculus, and three dimensional analytic geometry. His second child, a daughter Cornelia Charlotte Marie Auguste Mathilde Victoria Zehfuss, was born in Darmstadt on 16 September 1864. Zehfuss continued in his position at the Gewerbeschule in Frankfurt am Main for the rest of his career.

Zehfuss died in Frankfurt am Main on 5 May 1901. He was buried in Heidelberg in the mountain cemetery of Heidelberg-Südstadt. Also buried there are his wife Luisa, his daughter Cornelia (1864-1949), and his daughter's husband Georg Anton Karch (1856-1937).

Today the name of Zehfuss is not known by many but those who are aware of his contributions almost certainly know him through his contribution to the tensor product of matrices. Without offering a definite opinion as to whether the 'Kronecker product' should be called the 'Zehfuss product' let us simply quote from a number of sources.

The operation defined by the symbol ⊗ was first used by Johann Georg Zehfuss in 1858. It has since been called by various names, including the Zehfuss product, the Producttransformation, the conjunction, the tensor product, the direct product and the Kronecker product. In the end, the Kronecker product stuck as the name for the symbol and operation, ⊗.

The Kronecker product, named after German mathematician Leopold Kronecker, is very important in the areas of linear algebra and signal processing. In fact, the Kronecker product should be called the Zehfuss product because Johann Georg Zehfuss published a paper in 1858 which contained the well-known determinant conclusion, ∣A⊗B∣=∣A∣n∣B∣m for square matrices A and B with order m and n.

Some historians of mathematics have questioned the association of the ⊗ product with Kronecker's name on the grounds that there is no known evidence in the literature for Kronecker's priority in its discovery or use. Indeed, Sir Thomas Muir's authoritative history [3] calls det(A⊗B) the 'Zehfuss determinant' of A and B because the determinant identity
∣A⊗B∣=∣A∣n∣B∣m
appears first in an 1858 paper of Johann Georg Zehfuss ("Über eine gewisse Determinante Ⓣ, Zeitschrift für Mathematik und Physik 3 (1858), 298-301"). Following Muir's lead, a few later authors have called A ⊗ B the 'Zehfuss matrix' of A and B, for example "D E Rutherford, On the Condition that two Zehfuss matrices be equal, Bull. Amer. Math. Soc. 39 (1933), 801-808", and "A C Aitken, The normal form of compound and induced matrices, Proc. London Math. Soc 38 (2) (1935), 354-376". However, a series of influential texts at and after the turn of the century permanently associated Kronecker's name with the ⊗ product, and this terminology is nearly universal today. For further discussion (including claims by others to independent discovery of the determinant result) and numerous references, see "H V Henderson, F Pukelsheim and S R Searle, On the history of the Kronecker product, Linear and Multilinear Algebra 14 (2) (1983), 113-120".

Our story begins with one Johann Georg Zehfuss (1832-1901) at the University of Heidelberg who, according to biographical notes by Poggendorf (1863, 1898), published papers on determinants until at least 1868 before moving to studies in astronomy. In particular, Zehfuss (1858) contains the determinant result
∣A⊗B∣=∣A∣b∣B∣a
for square matrices A and B of order a and b, respectively. Zehfuss wrote in terms of determinants rather than matrices, following the then customary practice of employing the term 'determinant' both for what we now call a square matrix as well as for its determinant. ... Unfortunately, the Zehfuss (1858) determinant result seems to have been overlooked for more than fifty years, until its rediscovery by Muir (1911, reprinted in [3]) who claims it for Zehfuss and accordingly calls ∣A⊗B∣ the Zehfuss determinant of A and B. Others, notably Rutherford (1933), and Aitken (1935) and his student Ledermann (1936), following Muir's lead, have gone further and called A ⊗ B the Zehfuss matrix of A and B. Aitken's adoption of this name is of interest in light of Ledermann's later (1968) comment that Aitken "was particularly fond of stressing the claims of lesser known mathematicians of former times for discoveries erroneously attributed to their more famous contemporaries. Many of his historical references were gleaned from Sir Thomas Muir's monumental work on determinants, for which Aitken had a profound admiration."

Although Zehfuss is best known for his contributions to determinants, he made other contributions to mathematics in difference equations, differential and integral calculus and combinatorics. Later in his career, however, his attention turned more towards physics and astronomy. He actively participated in the annual meetings of the Gesellschaft Deutscher Naturforscher und Ärzte Ⓣ, especially when the meetings were in Frankfurt am Main or in the vicinity of the city. He also participated in meetings of the Wetterauischen Naturforschenden Gesellschaft zu Hanau Ⓣ. He lectured to these societies on determinants, but also showed a model of a Riemann surface and gave a lecture "On a Possible Cause of the Delay of Earth Rotation." In this lecture he showed (see [7]):-

... that magnetic forces which the heavenly bodies mutually exert cannot effect this delay, whereas the constant magnetic field in which the planets move can cause a change in precession which could lead to an explanation of the observation.

Other lectures related to astronomy included "On meteorites" delivered in 1870 and "Some explanations of the appearance of the Northern Lights" in 1871.

He wrote the book Die Pneumatische Canalisation beleuchtet mit Rücksicht auf Gesundheitspflege, Land- und Volkswirthschaft Ⓣ which was translated into English by D Coar of Philadelphia, Pennsylvania, USA and appeared as The Pneumatic Sewage System treated with reference to Public Health, Agriculture and National Economy published by Wilhelm Hassel in Cologne in 1869. The book commences with an historical introduction in which Zehfuss refers to sewage systems mentioned in the Bible, those constructed by the Hindus, the ancient Egyptians, the Babylonians, and the Romans in 600 B.C. A patent was sought in the United States for the sewage system Zehfuss describes in the book and he received a letter of patent from the United States Patent Office in 1870 (letter of patent No. 100,347).

Finally, let us note that prior to the appearance of [7], few biographical details concerning Zehfuss were readily available. Much of the biographical information in our biography above comes from Walter Strobl's paper.
Other Mathematicians born in Germany

Other pages about Georg Zehfuss:

Other websites about Georg Zehfuss: