Born
25 August 1844
Stonebyres, Falls of Clyde, Lanarkshire, Scotland
Died
21 March 1934
Rondebosch, South Africa
Summary
Thomas Muir was a Scot who went on to be Superintendent General of Education in South Africa and is best known for his five volume History of Determinants. 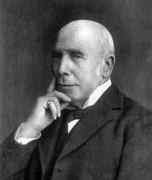 Thomas Muir was the son of George Muir from Stonebyres, near Lanark, in Scotland. George was a shoemaker in Biggar and it was in that town, about 15km from the town of Thomas's birth, that Thomas was brought up. He attended an independent school in Wishaw, about half way between Biggar and Glasgow, and there his favourite subject was Greek.

Thomas entered the University of Glasgow intending to study his favourite subject of Greek. Indeed he started on a classics course, showing outstanding ability in Greek, but Thomson (later Lord Kelvin) recognised his genius for mathematics and persuaded him to study that subject. Many years later Muir recalled his days at Glasgow University, saying:-

I remember Lord Kelvin showing me the first gramophone.

He also considered Kelvin as a great man saying:-

... the great man I define as the man who does not alter, who always has control, who alters others.

He became a tutor at St Andrews University in 1868, then travelled on the Continent, meeting many of the top mathematicians. His visit to Berlin was especially profitable and he quickly realised that Continental mathematics had made striking advances which were essentially unknown in Britain. He also began to collect books which became a passion for him.

In 1871 Muir became an assistant at Glasgow University and it was shortly after this that he published his first paper with the Royal Society of Edinburgh who then elected him a fellow [election to a fellowship is rather different today!]. Muir spent three years lecturing on mathematics at Glasgow University and quickly gained a reputation as a fine teacher. Then from 1874 to 1892 he was mathematics and science master at Glasgow High School. During this time, in 1876, he married Margaret Bell from Dumbartonshire.

A man's little work lies not isolated, stranded; a whole busy world environs it, will catch it up, will carry it forward or else backward, always, infallibly, the Thing Done will come to use.

Muir was appointed to this position by Cecil Rhodes, then prime minister of Cape Colony, while Rhodes was visiting England. In fact Muir was at the time deciding whether to accept an offer of the Chair of Mathematics from Stanford University in California. It is likely that he would have accepted and gone to the United States had it not been for Rhodes' persuasive powers.

There was another reason why accepting a post in South Africa was attractive to Muir. His wife had poor health and had been advised to live in a warmer climate. Arriving in South Africa on 20 May 1892, he was to introduce many educational reforms [1]:-

At the Cape his task was to pull together and develop a loose system. He recognised the whole educational ladder from elementary school to university, practically created science teaching, and formed efficient training colleges for teachers. It was a long and arduous task, impossible for anyone except a real enthusiast ...

Muir received several awards from the Royal Society of Edinburgh. He received their Keith Medal twice for research in mathematics, first in 1884 and again in 1899. He was also awarded the Gunning-Victoria Prize for scientific contributions in 1916. Other honours which he received from Scotland included an honorary Fellowship of the Scottish Geographical Society (1892) and an honorary degree from the University of Glasgow (1882).

Muir was knighted in 1910, four years after he had reworked his 1890 publication to become Volume 1 of History of determinants which covered the origins to Leibniz in 1840. It was not easy as he explained:-

Progress was, however, very slow, reference libraries, for one thing, being 6000 miles away.

In 1919 Muir's wife Margaret died. The marriage had produced two sons and two daughters. In 1930, at the age of 86, Muir published Contributions to the history of determinants. In 1931, at the age of 87, he showed surprising abilities to keep with the modern flavour of his subject when he wrote that he:-

... welcomed the light matrix proofs in contrast to the heavy footed methods of thirty-five years ago.

He was, of course, writing a history of determinants from 1920 to 1940 at the time. It is worth thinking exactly what Muir was attempting here. Can you imagine setting out to write today (in 2003) the history of a mathematical topic from 1993 to 2013? It would be a daunting task for a young person to attempt, but what if like Muir you were 87 years old at the time!

Turnbull writes (in the Proceedings of the Royal Society):-

From the age of 60 until 84 Muir played tennis, and on one occasion at the latter age he played four sets with his grandchildren. When at last the tennis racquet was abandoned he took exercise by sawing wood or walking among his beloved flowers and pine trees. He had a gentle, kindly manner, twinkling eyes and quick smile, a keen sense of humour and a penetrating wit. To the end he was courtly, sympathetic, and charming, with his wide knowledge of men and books, his sight and hearing well-nigh perfect, and upright as a pine in his plantation at Rondebosch. He was a scholarly musician - almost his last public appearance was when he attended the opera in August 1933. He had a refined judgement in poetry, and at one time had a fine library of English literature, before his mathematical collection crowded it out.

Other Mathematicians born in Scotland
A Poster of Thomas Muir

Other pages about Thomas Muir:

Other websites about Thomas Muir: