Born
about 474
(possibly) Tralles (near Aydin in southwest Turkey)
Died
about 534
Summary
Anthemius was the Byzantine architect who replaced the old church of Hagia Sophia at Constantinople. He described the construction of an ellipse with a string fixed at the two foci and he described the focal properties of the parabola. 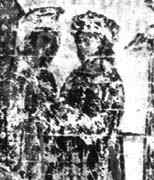 Anthemius of Tralles's father was a doctor by the name of Stephanus. Anthemius came from a well educated family with two brothers who were doctors, one brother who was a lawyer and another who was described as a man of learning.

Anthemius is known both as a mathematician and an architect. As an architect he is best known for replacing the old church of Hagia Sophia at Constantinople in 532. His skills seem also to have extended to engineering for he is said to have been employed to repair flood defences at Daras.

You can see an article about Hagia Sophia at THIS LINK.

He described the construction of an ellipse with a string fixed at the two foci. His famous book On Burning Mirrors also describes the focal properties of a parabola. Heath [2] gives one of his problems which leads to the ellipse construction:-

To contrive that a ray of the sun (admitted through a small hole or window) shall fall in a given spot, without moving away at any hour and season.

This is contrived by constructing an elliptical mirror one focus of which is at the point where the ray of the sun is admitted while the other is at the point to which the ray is required to be reflected at all times.

Anthemius studied the focal properties of the parabola and proves that [2]:-

... parallel rays can be reflected to one single point from a parabolic mirror of which the point is the focus. The directrix is used in the construction, which follows, mutatis mutandis, the same course as the above construction in the case of the ellipse.

He compiled a survey of remarkable mirror configurations in his work On remarkable mechanical devices which was known to certain of the Arab mathematicians such as al-Haytham.

There are a number of stories told of Anthemius which may be totally fictitious but, as is often the case with such stories, they may give an indication of his character. Huxley writes [1] (see also [3]):-

Anthemius persecuted a neighbour and rival Zenon by reflecting sunlight into his house. He also produced the impression of an earthquake in Zenon's house by the use of steam led under pressure through pipes connected to a boiler.

Other Mathematicians born in Turkey
A Poster of Anthemius

Other pages about Anthemius:

Other websites about Anthemius: