A A Krishnaswami Ayyangar 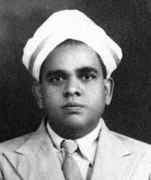 It should be an interesting problem for a socio-psychologist to analyse the effects on the members of a society brought upon by the birth of a genius among them. Such a typical instance was the birth of Srinivasa Ramanujan in the Tamil country. Whatever be the other effects, it certainly led to an increased awareness and appreciation of the rich mathematical heritage of India and a renewal of interest in the study of mathematics. This renaissance in Tamil Nadu showed itself in the coming up of a number of gifted teachers, well versed not only in mathematics, but also in the mathematical legacy of the country. A A Krishnaswami Ayyangar was prominent among them.

Krishnaswami Ayyangar married Seshammal and they had four sons, A K Srinivasan, A K Ramanujan, A K Rajagopal, A K Vasudevan, and two daughters Mrs Vedavathi Bhogishayana and Mrs Saroja Krishnamurthi. In 1918 Krishnaswami Ayyangar left Chennai and joined the Mysore Educational Service and worked in the Mathematics Department of Maharaja College. He also worked for some time as a Reader in the Department of Statistics, Andhra University at Waltair. During nearly three decades during which he taught and undertook research at Mysore he made many contributions to geometry, statistics, astronomy, the history of Indian mathematics, and other topics.

As an example we quote some of A K Srinivasan's comments on Krishnaswami Ayyangar's paper The Hindu Arabic numerals [1]:-

This paper traces the history of the Hindu numerals. It establishes that Western writers, who had a bias towards Greek mathematicians, are wrong in saying that Hindus did not have their own system of numerals and that these numerals were spread by Arab merchants to their country. From India these numerals were adapted by others. Leonardo Fibonacci spread the Hindu numerals in Europe and in 1202 wrote his thesis Liber Abaci.

As a second example we note that Peeps into India's mathematical past:-

... traces the ancient Hindu mathematics from 800 B.C. to 1200 A.D. It has a brief description of the mathematics and astronomy developed by Indian mathematicians of that era. The following are the topics selected:

R S Ridharan ends his review of [1] as follows:-

In spite of the fact that these articles were written several years ago, they deal with issues which are of current relevance and make interesting reading. One is impressed by the scholarship of the author, his knowledge of the subject as well as of Sanskrit.

Krishnaswami Ayyangar retired from the University of Mysore in 1947.

Ayyangar joined the Edinburgh Mathematical Society in November 1923. He read the paper On the Sexi-Sectional Equation at a meeting of the Society on Friday 7 November 1924. He remained a member of the Society for about 10 years.
Other Mathematicians born in India
A Poster of A A Krishnaswami Ayyangar

Other pages about A A Krishnaswami Ayyangar:

Other websites about A A Krishnaswami Ayyangar:

Honours awarded to A A Krishnaswami Ayyangar