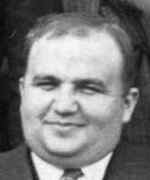 Georgi Bradistilov's parents were Delcho Petkov Bradistilov (?-1927), a high-ranked civil servant at Bulgarian Ministry of Finance, and Nona Motekova (1876-1958). Delcho and Nona Bradistilov had three children, two girls Penka Delcheva Bradistilova (1897-1972) and Raina Delcheva Bradistilova (1901-1923), and one son Georgi, the subject of this biography. Georgi was the youngest of his parents' children. We have given his date of birth as 12 October 1904 and this was indeed the date in Bulgaria when he was born. However, Bulgaria was still at this time on the Julian calendar so the date of his birth by the Gregorian calendar in use in Britain, France, Germany etc. was 25 October.

Bradistilov attended the Third Gymnasium of Sofia, completing his studies in 1923. Later in the same year he entered the St Kliment Ohridski University of Sofia where his main topics of study were mathematics and physics. This university had been established in 1888 and the Faculty of Mathematics and Physics was the third faculty, founded in 1889. When Bradistilov began his studies he was one of around 2400 students. In fact while he was studying at the university the construction of new university buildings was taking place but they were not opened until several years after Bradistilov graduated. He would, however, teach in these new buildings later in his life. After graduating, he was appointed as an assistant lecturer at the University of Sofia.

In the 1931-32 he studied at the University of Paris, attending lectures by Jacques Hadamard and Élie Cartan. This was the first of two study years abroad, the second coming in 1937-1938 which he spent at the University of Munich. There he studied under Arnold Sommerfeld and Constantin Carathéodory. Interestingly, Bradistilov was one of the last students to take Arnold Sommerfeld's course in theoretical physics before his retirement. During this year he undertook research for his doctorate advised by Oskar Perron. On 30 June 1938, he defended his thesis Über periodische und asymptotische Lösungen beim n-fachen Pendel in der Ebene Ⓣ at the University of Munich and it was published in Mathematische Annalen in the same year. Bradistilov wrote in the paper:-

This thesis has been accepted by the Department of Philosophy, Faculty II, Section of the University of Munich as dissertation (D 19). I would like to thank Prof Dr O Perron for his valuable suggestions.

In 1939 he published two papers, the first being Über periodische Bewegungen des n-fachen Pendels in der Ebene Ⓣ which was also published in Mathematische Annalen. Bradistilov writes in that paper:-

The second of his 1939 papers was Periodic movements of a system of n pendulums, that are located in a plane (Bulgarian).

After the award of his doctorate, Bradistilov was appointed as a docent at the St Kliment Ohridski University of Sofia. In 1940 he won a competition for an associate professorship in the Department of Differential and Integral Calculus at the University of Sofia. Also in 1940 he married Dobrinka Dimitrova. She was an artist who was born on 17 September 1906 in the town of Kazanlak. She graduated in painting in Florence and then taught at the Italian School, before worked at the UBA, the Union of Bulgarian Artists, in Sofia.

In May 1943 Bradistilov was appointed as an Extraordinary Professor and Head of the Department of Applied Mathematics in the Higher Technical School. His move from the university to the Higher Technical School was motivated by his research interests which were on applications of mathematics. Two years later, on 15 October 1945, the Higher Technical School was renamed the State Polytechnic University and Bradistilov was elected as a full professor. The State Polytechnic University had, at this time, one faculty, namely the Faculty of Mechanical Engineering, with four divisions: mechanical engineering, electrical engineering, mining and geology. Immediately after his appointment he was elected as Dean of the Faculty, a position he held in 1945-47. Following this he served as rector of the university in 1947-48.

... he enjoyed the esteem and gratitude of the academic staff.

He used to say that good work requires the following rule (which clearly does not translate into English where the corresponding words do not begin with the letter O):-

His colleagues would often hear one of his favourite expressions:-

Let's get down to business!

Despite his administrative duties, nevertheless Bradistilov was a great believer in Henri Poincaré's saying:-

Both of these were equally important to him. In fact his colleagues said that [3]:-

For him, to disseminate knowledge was both a great personal pleasure and a moral obligation.

Consequently he taught a large range of different mathematical courses in his role as Head of the Department of Mathematics. These courses were: Higher Algebra, Theory of functions, Differential Equations, Integral Equations, Differential Geometry, Projective geometry, Variational Calculus, Operational Calculus, and Probability Theory. As Head of the Department of Mathematics in the Institute of Mechanical and Electrical Engineering he organised, managed and reformed the teaching of mathematics during his eighteen years in that role. He supported teaching by writing a large number of textbooks and manuals for his students. For example he published Vissha matematika Ⓣ in 1954. Among his books are Matrix calculus and Operational calculus. He was a conscientious and dedicated teacher [3]:-

His students said that he was building them as professionals and as individuals - patiently, tactfully and in good faith, always ready to help with advice or ideas, impressed on them to tell the truth simply with humour.

His research interests were in applications of mathematics and he studied periodic and asymptotic solutions of systems of differential equations, applications of nonlinear differential equations in electrical engineering, nonlinear oscillations and resistance, and electrostatic potential. His research on these topics resulted in over 100 papers, some of which were co-authored. Here are a few of these papers which we quote as examples of his contributions: The position of a system of three consecutively connected mathematical pendulums in one plane in their periodic motion about a position of stable equilibrium (Bulgarian) (1954); Sur les solutions périodiques et asymptotiques du mouvement autour de l'état d'équilibre d'un système de N-pendules physiques successivement liés dans un plan Ⓣ (1955); (with George Boyadjiev) Existenz periodischer Bewegungen eines n-fachen Pendels im Falle, dass einige Wurzeln seiner charakteristischen Gleichung ein Vielfaches einer anderen sind Ⓣ (1959); Periodic and asymptotic motions of compound physical pendula coupled in a vertical plane (Russian) (1963); (with George Boyadjiev) Periodic solutions of an autonomous system and their application to autogenerators with n oscillating circles (Bulgarian) (1964); (with George Boyadjiev) The periodic solutions and the stability of a quasilinear autonomous system of differential equations in the case of multiple roots of the fundamental equations (Bulgarian) (1966); (with Georgi Boyadjiev) On the periodic solutions of an autonomous system of differential equations of second order in a critical case (1970); (with Spas Manolov) On a certain algebraic condition for periodic trajectories in the case of autonomous systems of differential equations with polynomial nonlinearities of a certain class (Bulgarian) (1973); and Une condition nécessaire et suffisante pour l'existence de solutions périodiques d'un système d'équations différentielles de second ordre Ⓣ (1975).

Bradistilov participated in many international conferences, in particular meetings which took place in Dresden, Edinburgh, Moscow, Kiev, Warsaw, Berlin, Milan, Budapest, Munich, lmenau, and Athens. He also played a part in a number of mathematical societies such as the Union of Bulgarian Mathematicians and the Balkan Mathematical Union. One of his great achievements was the creation and long-time leadership of mathematical forums which played a large role in the development of mathematics in Bulgaria. We mention two in particular, namely the Seminar on Differential Equations at the Institute of Mechanical and Electrical Engineering and the National Colloquium of Mathematics at the Union of Bulgarian Mathematicians. He was an editor of the journal Theoretical and Applied Mechanics. Peter Popivanov writes [2]:-

With great taste, precision and enthusiasm he prepare a detailed report on the activities and achievements of Bulgarian mathematicians who were specialists in ordinary and partial differential equations, which delivered at the Conference on Differential Equations and Applications, held in Rousse, Bulgaria, at the end of June 1975.

In the early 70s we would see him in the summer at the International House of Scientists "Frédéric Joliot-Curie" at the resort St Constantine in Varna, where, in the company of Academician K Bratanov, Academician L Iliev, Academician H Daskalov, Academician R Tzanev, and the famous artist Vasil Stoilov, he created an indescribable atmosphere of enjoyment, wit and academic spirit. In the foyer of the House there were pictures painted by Professor Bradistilov's wife, our talented artist.

Bradistilov received many honours from his country for his outstanding contributions to science and education in Bulgaria: Honoured Scientist (1965), National Order Of Labour (1974), Order Of The Red Banner Of Labour (1959), Order of Saints Cyril and Methodius First Class (1957), Order of Saints Cyril and Methodius First Class (1963), and Order Of The People's Republic Of Bulgaria 2nd Class (1964). He was elected to the Bulgarian Academy of Sciences in 1967, becoming the first expert on differential equations to be elected to the Academy. He was made an honorary member of the Union of Bulgarian Mathematicians in 1975. A street in Sofia, near the Technical University, has been named for him.

Following his death, Bradistilov was buried in Sofia central cemetery. His wife, who died in 1984, is buried in the same grave. Let us end with Peter Popivanov's tribute [2]:-

Already 27 years have passed since the death of Professor Bradistilov. But I think that his influence on Bulgarian mathematics, applied mathematics and education did not die. His presence in our scientific life continues. He continues to instil respect with his life's work as an example of a worthy Bulgarian.

Other Mathematicians born in Bulgaria

Other websites about Georgi Bradistilov: