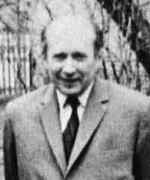 Israil Gelfand went to Moscow at the age of 16, in 1930, before completing his secondary education. There he took on a variety of different jobs such as door keeper at the Lenin library, but he also began to teach mathematics.

There were many different institutes in Moscow where mathematics was taught in evening classes and Gelfand taught elementary mathematics in various of these institutes, then a little later progressing to teach more advanced mathematics. While he did this evening teaching he also attended lectures at Moscow University, the first course he attended being the theory of functions of a complex variable by Lavrent'ev.

In 1932 Gelfand was admitted as a research student under Kolmogorov's supervision. His work was in functional analysis and he was fortunate to be in a strong school of functional analysis so he received much support from other mathematicians such as A E Plessner and L A Lyusternik. Gelfand presented his thesis Abstract functions and linear operators in 1935 which contains important results, but is perhaps even more important for the methods that he used, studying functions on normed spaces by applying linear functionals to them and using classical analysis to study the resulting functions.

Gelfand's next major achievement was the theory of commutative normed rings which he created and studied in his D.Sc. thesis submitted in 1938. The importance of this work is brought out in [20] and [21]:-

... it was [Gelfand] who brought to light the fundamental concept of a maximal ideal which made it possible to unite previously uncoordinated facts and to create an interesting new theory. Gelfand's theory of normed rings revealed close connections between Banach's general functional analysis and classical analysis.

During the time that he was carrying out this work for his D.Sc., Gelfand taught at the USSR Academy of Sciences. He held a post at the Academy from 1935 until 1941 when he was appointed as professor at Moscow State University.

In joint work with Naimark in the early 1940s, Gelfand worked on noncommutative normed rings with an involution. They showed that these rings could always be represented as a ring of linear operators on a Hilbert space.

Another important area of his work is that on differential equations where he worked on the inverse Sturm-Liouville problem. He saw the importance of the work of Sobolev and Schwartz on the theory of generalised functions and distributions, and he developed this theory in a series of monographs. He worked on computational mathematics, developing general methods for solving the equations of mathematical physics by numerical means. In this area he also worked on difference operators.

Gelfand's work on group representations led him to study integral geometry (a term due to Blaschke) which in turn he was led to by a study of the Radon transform. Between 1968 and 1972 Gelfand produced a series of important papers on the cohomology of infinite dimensional Lie algebras.

On the basis of actual biological results, he developed important general principles of the organisation of control in complex multi-cell systems. These ideas, apart from their biological significance, served as a starting point for the creation of new methods of finding an extremum, which were succesfully applied to problems of X-ray structural analysis, problems of recognition, .....

Gelfand's interests were certainly not confined to research despite his incredible record of having published over 500 papers in mathematics, applied mathematics and biology. He established a correspondence school in mathematics which [4]:-

... helped to bring rich mathematical experiences to students all over the Soviet Union.

One of the characteristic features of Israil Moiseevic's activities has been the extremely close bond between his research work and his teaching. The formulation of new problems and unexpected questions, a tendency to look at even well known things from a new point of view characterises Gelfand as a teacher, regardless of whether at a given moment he is holding a conversation with schoolchildren or with his own colleagues.

For services in the development of mathematics, the training of scientific specialists and in celebration of his sixtieth birthday ...

In 1989-90 Gelfand taught at Harvard University and in 1990 he also taught at Massachusetts Institute of Technology. In that same year, 1990, he emigrated to the United States where he became Distinguished Visiting Professor at Rutgers. He also holds a chair in the departments of mathematics and biology at the Center for Mathematics, Science, and Computer Education in the Institute for Discrete Mathematics and Computer Science at Rutgers University.

In 1992 Gelfand set up a programme in the United States similar to the correspondence school in mathematics which he had run in Russia. The Gelfand Outreach Program [4]:-

... no-strings-attached awards that are intended to foster creativity in a wide range of human endeavours. The award to Gelfand is $375,000, to be paid over five years.

Let us mention two other honours given to Gelfand. In 1989 he received the Kyoto Prize from the Inamori Foundation, an international award to honour those who have contributed significantly to the scientific, cultural, and spiritual betterment of mankind. The announcement states:-

Izrail Moiseevich Gelfand is one of the highest authorities in modern mathematical sciences. Through his pioneering and monumental work in mathematical sciences, especially in functional analysis - which has experienced tremendous development this century and not only affected other areas of mathematics but has also provided indispensable mathematical tools for the physics of elementary particles and quantum mechanics - he has brought up and inspired many prominent mathematicians in the course of his creative career. He has provided key ideas and deep insights to the whole of mathematical sciences and made outstanding contributions to the advancement of the field.

In 2005 Gelfand received the Leroy P Steele Prize of the American Mathematical Society for Lifetime Achievement:-

... for profoundly influencing many fields of research through his own work and through his interactions with other mathematicians and students.

Other websites about Israil Gelfand: