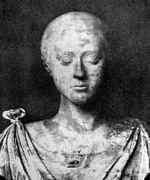 Elisabetha Koopman's parents were Nicholas Kooperman (or Cooperman) (1601-1672) who was a prosperous merchant and Joanna Mennings (or Menninx) (1602-1679). Nicholas and Joanna were married in Amsterdam in 1633. They moved from Amsterdam to Hamburg then, in 1636, they moved to Danzig. It was in this city, largely German speaking but a part of Poland at the time, that their daughter Elisabetha was born.

It was a fascination for astronomy which led Elisabetha, when still only a child, to approach Hevelius, an astronomer of international repute who had a complex of three houses in Danzig which contained the best observatory in the world. Hevelius promised the little girl that he would show her "the wonders of the heavens" when she was older. Hevelius's wife died in March 1662 and some time after this Elisabetha, now aged fifteen, again approached Hevelius and reminded him that he promised to show her the heavens from his observatory when she was older - and now she was fifteen. In fact she had become even more enthusiastic about astronomy as she had grown older and had come more and more to realise what an important figure in the world of astronomy was living in the same city. Hevelke writes, in a text which has a very quaint old fashioned style, that the older she grew [1]:-

... the more she surrounded the figure of the admired scholar with deep and sincere veneration, and with this there mingled a budding love and an imaginative admiration, until she longed to be allowed to serve the great man always, at his mysterious work, carried out in the stillness of the night; to share in his successes and in his renown. And when in the star-lit night she followed with enraptured gaze and beating heart, through his giant telescope, the shining full moon, on her silent path, she exclaimed with enthusiasm "To remain and gaze here always, to be allowed to explore and proclaim with you the wonder of the heavens; that would make me perfectly happy!" And the worthy man felt that it might make him happy too.

So perhaps, it came about. They made the bold experiment, these two so unequal in age. The experiment turned out happily. ... They were betrothed in St Catherine's Church in 1663. The astronomer found in the young, much admired lady, a skilful and untiring, and understanding and loyal helpmate in his observations and labours. Elisabetha may herself have often remembered the words that had so often encouraged her husband: "Nothing is sweeter than to know everything and enthusiasm for all good arts brings, some time or other, excellent reward."

There are several things about Elisabetha that would benefit by further research to make her life more understandable. We know, for example, that she wrote Latin since we have copies of letters she wrote to other scientists in Latin. Hevelius wrote Latin, but one has to say that Elisabetha writes with more style than her husband. The question is, then, when did she learn Latin? It would be extremely unusual if she had learnt it as a child before marrying Hevelius but this must remain a possibility. If she learnt Latin to help her husband, this also would be surprising and one would have to ask quite why the effort of learning Latin would have been a priority for her at that time. However, one of these two scenarios must be the answer. Again we know that she undertook mathematical work, for Arago relates that she did very useful work making observations with Hevelius's instruments and undertook very useful work with mathematical calculations. In this case one might be more certain that she was taught the necessary mathematical skills by Hevelius but again we cannot rule out the possibility that she had some lessons in mathematics as a child.

Elisabetha and Johannes Hevelius married in St Catherine's Church, Danzig, on 3 February 1663. They had one son, who died at the age of one year, and three daughters all of whom later married and had children of their own. The eldest of the three daughters was named Catherina Elisabetha (after her mother) and baptised in St Catherine's Church, Danzig, on 14 February 1666. From the writings of Johann(III) Bernoulli we know that Elisabetha:-

... was taken ill with small-pox and was badly marked by it. Her husband, who had never had this disease, never left her sick-bed and nursed her faithfully ...

This must have occurred shortly before Hevelius died, certainly long after the tragedy which came the way of the family. Their home and observatory were destroyed by fire, possibly deliberately started, on the night of 26 September 1679.

You can read an account of the Hevelius fire.

Hevelius wrote to his patron King Louis XIV of France, explaining what happened that night. The beginning is useful in describing Elisabetha's contributions:-

On the unhappy evening before the fire I felt deeply troubled by unaccustomed fears. To lift my spirits, I persuaded my young wife, the faithful assistant for my nightly observations, to spend the night in our country retreat outside the walls of the city ...

Edmond Halley had visited Hevelius and his wife during the summer of 1679, shortly before their home and observatory were destroyed by fire. Perhaps because of the fire a rumour reached England that Hevelius was dead. Elisabetha must have asked Halley to buy a dress for her in England, for, in October 1679, Halley sent the dress to the secretary of the city of Danzig, writing:-

I quite realise that [Hevelius's] heartbroken spouse must be wearing sad-coloured apparel, yet for several reasons I have thought well to send the gown procured for her ... because I am not yet certain her husband is dead, in which case I judge nothing would be more unwelcome than delay ... since it is of silk and of the newest fashion, I am confident it will highly please Mme Hevelius, if only it should be granted to her to wear it ...

After giving precise details of the cost of the silk and the making of the dress, he requests Elisabetha to send him three copies of Hevelius's books to cover the cost. In March 1680, Elisabetha Hevelius wrote a letter in Latin, almost certainly to Halley, asking for the name of a doctor whom he had recommended, when living in their home, as knowing of a diet that would cure arthritis. One assumes that it is Hevelius who is suffering from arthritis and his wife is seeking a cure for him.

After the death of Hevelius in January 1687, Elisabetha Hevelius went about the task of preparing three of his partly finished books for publication. In November 1687 she wrote to the Royal Society in London, asking for assistance in editing the books. It would appear that no assistance was given. The first of the three works, Stellarum Fixarum, which one assumes only required minimal editing, was published by Elisabetha in 1687. The other two works she published were Firmamentum Sobiescianum sive Uranographia etc. (1690) which contained 56 star charts, and Prodromus Astronomiae (1690) containing a catalogue of 1564 stars. There is no doubt that, as well as editing these works, much of their contents had been due to her in the years she worked with her husband.

Elisabetha Hevelius died in December 1693 and was buried in the same tomb as her husband. She was only 46 years old. Arago wrote:-

A complimentary remark was always made about Madam Hevelius, who was the first woman, to my knowledge, who was not frightened to face the fatigue of making astronomical observations and calculations.

Other Mathematicians born in Poland
A Poster of Elisabetha Koopman

Other websites about Elisabetha Koopman: