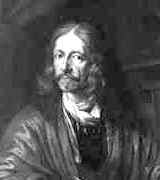 The first problem that we have to address is the different forms of Johannes Hevelius's name. Various forms of the family name are found such as Hevel, Hövel, Hewel, Höfelcke, Hewelcke, Höwelcke, Höfelius, Hövelius, Höwelius, and Heweliusz. A German may have addressed him as Johann Hewel or Johann Howelcke, while a Pole might have addressed him as Jan Heweliusz. Among all these forms we have not given the one by which he is today known, namely Johannes Hevelius. Certainly the subject of this biography was the first to use this particular Latin form of his name. His father was Abraham Höwelcke (1576-1649) and his mother was Cordelia Hecker (1576-1655). Abraham owned a profitable brewery and he was the owner of several houses. Johannes was one of a large family, having three brothers and six sisters. He was the only one of the four brothers to survive beyond early childhood. The family were of German and Czech ethnicity and were German speaking although the city of Danzig was under control of Poland. Polish was spoken in the area and even as a child he would have had some knowledge of that language.

When Johannes was seven years old, he entered the Gymnasium in Danzig, studying there for six years. These were the years of the Thirty Years War but the area around Danzig was largely unaffected. However, by 1624 problems caused the Gymnasium to be temporarily closed and Johannes's parents sent him to a school in the small village of Gondeltsch near Bromberg (Polish Bydgoszcz). This was a Polish speaking area and the idea was that he would become fluent in Polish. In 1627 he returned to the Gymnasium in Danzig where he became fascinated by mathematical topics. The mathematics teacher, Peter Krüger, was inspirational and, having an interest in astronomy, he soon transmitted this interest to the young Hevelius. Wishing to take these studies beyond anything that might reasonably be taught at the Gymnasium, Hevelius took private lesson with Krüger in which he learnt the full range of astronomical learning of the period. Not only did Krüger teach Hevelius theoretical astronomy, but he also taught him to construct astronomical instruments both from wood and from metal.

At the age of nineteen, in 1630, Hevelius boarded a ship bound for Holland. He was off to study law at the University of Leyden, but his fascination with astronomy was enhanced when an eclipse of the sun occurred while he was on board the ship. His observations would form part of a publication later in his life. Although he was a conscientious student of jurisprudence at Leyden he still found time to study mathematics, in particular optics and mechanics. After a year he set off from Leyden to undertake further travels, going first to England where he lived for around a year in London. He then moved on, going to France in 1632 where he sought out leading astronomers such as Gassendi and Boulliau in Paris. Hevelius's plans to go next to Italy to visit Galileo had to be cancelled when he received a message from his parents to return to Danzig, which he did in 1634. Being his parents' only son, they wanted him to be in a position to take over the family brewery business and stop travelling round Europe visiting leading astronomers.

Back in Danzig he followed his father's wishes, undertaking the necessary studies of the customs and laws of the city so that he was admitted to the Brewer's Guild in 1636. By this time he was a married man, having married Katharina Rebeschke, the daughter of a wealthy citizen of Danzig, in the previous year on 21 March. He now settled down to a life in business and civic duties. Astronomy, which he had loved so much, was now a thing of the past and his life had fully moved into this new phase. However, his old teacher Krüger was by now nearing the end of his life and Hevelius visited him early in 1639. He encouraged the best pupil he had ever had not to give up astronomy but rather to get back his interests. This half succeeded but the event which sealed things was an eclipse of the sun which occurred on 1 June 1639. His interest had been awoken sufficiently by Krüger that Hevelius observed the eclipse and the old love of astronomy came flooding back. He was again totally hooked and from that time on spent every bit of his leisure time working on astronomy.

Hevelius had a brewery to run which could have taken up much of his time. However, his wife Katharina took over much of the administrative work associated with the brewery so that Hevelius could devote much of his time to constructing astronomical instruments, grinding lens for telescopes, making mounts for quadrants, sextants and other essential tools for a well equipped 17th century observatory. He also corresponded with most of the leading astronomers of Europe. In 1641 he was elected an alderman of Danzig, an event which meant that despite his wife's efforts running the brewery, Hevelius was again busy with duties which kept him away from astronomy. He also became a magistrate but the added pressure on his time did nothing but make him more determined that his work on astronomy would not suffer. In 1647 he published his famous text Selenographia Ⓣ. This contained 60 carefully executed drawings of the moon's surface, which he had observed using a 12ft telescope, as well as his discovery of the moon's libration in longitude. In 1649 his father died and Hevelius had sole responsibility for running the brewery. His determination to devote himself to astronomy meant that, remarkably, he had by now the finest observatory in the world installed at his home in Danzig.

In March 1662 Hevelius's wife Katharina died. In the following year he married Catherina Elisabetha Koopman, the sixteen year old daughter of a rich Danzig merchant. Unlike his first wife, Elisabetha was deeply interested in astronomy and details of her contributions are included in our biography of Elisabetha in this archive. These include both mathematical calculations and observing with her husband's instruments. Hevelius had no children with his first wife but with his second wife he had a son and three daughters. The son died at the age of one year but the daughters all married and had children of their own. Hevelius continued to increase his reputation across Europe, being awarded a pension by the French in 1663 and being elected to the Royal Society of London in 1664. In fact Hevelius had been in correspondence with Oldenburg, the secretary of the Royal Society, from January 1663 and they exchanged around 80 letters over the next 14 years (Oldenburg died in 1677). Hevelius also corresponded with most of the leading astronomers including Wallis, Flamsteed and Halley in England, and Gassendi and Boulliau in France. He was involved in a dispute with Hooke over whether his observations made with instruments without telescopic sights were of any value. This dispute began when Hooke read Hevelius's Machina Coelestis Ⓣ (1673). As well as giving details of his observations, Hevelius described his methods of using naked eye observations for positions of celestial objects. Of course Hooke was right, in that the future of astronomy was to use instruments with telescopic sights, which led to considerably more accurate coordinates. However, Hooke expressed himself in such a rude manner, Jardine says [2]:-

... an aggressive polemic, combined with a challenge, and a claim that he could produce better results himself ...

that one has to have sympathy with Hevelius who at first expressed himself with courtesy in a complaint to the Royal Society who had published Hooke's attack. The result was that Halley was sent to visit Hevelius to see which was correct. He arrived in Danzig on 26 May 1679 bringing with him a 2-foot quadrant with telescopic sights. Rather surprisingly the tests proved inconclusive as to whether the instrument with telescopic sights was more accurate. This was due partly to the quality of Hevelius's instruments and partly due to his extraordinary skill as an observer.

The row continued to rage at the Royal Society. Wallis, who took the opportunity to have a go at Hooke with whom he had fallen out, reviewed Hevelius's letter in the Philosophical Transactions of the Royal Society of 1685. He noted that Hevelius [2]:-

... wonders that Mr Hooke, who has never yet performed, or so much attempted, anything of this kind, should take it upon himself to censure others. Thinking that it more becomes learned men not to boast of what they can, or will, or mean to do, but rather to let the world know what they have done. And when Mr Hooke has performed such things so much more accurately, it will then be time to tell the world what they are.

Two secretaries of the Royal Society resigned over allowing this to appear in the Philosophical Transactions. Sadly Hooke had made himself widely disliked so the fact that he was on the right side scientifically put many of his colleagues in a quandary about whether to support him or Hevelius. For example, William Molyneux wrote to Flamsteed:-

I hear Dr Wallis has taken up the cudgels and vindicated Hevelius against Hooke. [If so] I should be very glad if the Dr and I have jumped together.

Several years before this, however, misfortune had come Hevelius's way. His home and observatory were destroyed by fire, possibly deliberately started, on the night of 26 September 1679.

You can read an account of the Hevelius fire.

Hevelius was 68 years old at this time and most men would have given up having lost the instruments they had spent a lifetime building as well as his books and the data he had gathered but not yet published. However, Hevelius showed remarkable determination and, by August 1681 he had rebuilt his observatory, although the new instruments were not of the same quality as those which had been destroyed. In 1685 he published Annus climactericus which continued the work of the second volume of Machina Coelestis Ⓣ (1679). Most copies of the second volume of Machina Coelestis Ⓣ had been destroyed in the fire but he had already sent out a small number of copies, some surviving to this day. Annus climactericus Ⓣ contains, in addition to the observations he and his wife had made following the fire, his observations of the variable star named by him 'Mira' -- it is still known by that name today.

Around the beginning of November 1686 Hevelius became ill and was admitted to hospital. He died on his birthday twelve weeks later. He was buried in St Catherine's Church in Danzig, on 13 February 1687. This was not, however, the end of Hevelius's contributions, since three books were published by his widow after his death. Further information about these works can be found in the biography of Catherina Elisabetha Koopman Hevelius.
Other Mathematicians born in Poland
A Poster of Johannes Hevelius

Other pages about Johannes Hevelius:

Other websites about Johannes Hevelius: