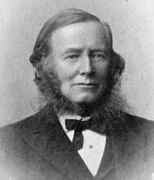 William Jack's father, Robert Jack, came from Irvine in Ayrshire. William attended Irvine Academy, and from there he went to the University of Glasgow. He graduated M.A. in 1853, then continued his education at the University of Cambridge. He was elected to a fellowship at Peterhouse, and was awarded a second degree of M.A. from Cambridge in 1859.

Jack had a surprisingly varied career. In 1860 he was appointed HM Inspector of Schools for the south-west district of Scotland. He became one of six inspectors of schools in the whole of Scotland. He held this position for six years before, in 1866, accepting the chair of Natural Philosophy at Owen's College, Manchester [1]:-

Owen's College then had only 113 students, and it occupied an old house in Quay Street which had belonged to Richard Cobden.

His next move was a rather surprising one for, in 1870, he left his Professorship at Manchester to take up an appointment as editor of the Glasgow Herald [1]:-

Perhaps the most vivid memory of his editorship was the outbreak of the Franco-Prussian War, tidings of which reached the office in Buchanan Street on a well-remembered Glasgow Fair Saturday.

While holding this post he was elected a fellow of the Royal Society of Edinburgh on 3 May 1875. He was proposed for the fellowship by Sir William Thomson (Lord Kelvin), James Thomson Bottomely, Allen Thomson, and Peter Guthrie Tait. Jack served on the council of the Society from 1888 to 1891. In the same year that he was elected to a fellowship of the Royal Society of Edinburgh, Jack was honoured with the award of an LL.D. by the University of Glasgow.

In fact Jack held the editorship of the Glasgow Herald for six years before moving to London in 1876 to take up a position with the publisher Macmillan & Co [1]:-

... an occupation in which he was thrown into contact with many of the best-known literary men of the day.

In 1879 Jack was appointed to the Chair of Mathematics at the University of Glasgow. He held this post for 30 years until he retired in 1909. George Alexander Gibson, Professor of Mathematics in Glasgow Technical College, was appointed to the Chair of Mathematics in Glasgow University, in succession to Jack in September 1909. It is worth noting that Gibson had been an assistant of Jack's at the University before he took up the appointment at Glasgow Technical College. In the year after Jack's retirement, the William Jack Prize was founded in commemoration of his services to Glasgow University. The following announcement was made:-

At the University of Glasgow a portrait of Professor William Jack was recently unveiled. In commemoration of his fifty years of service as teacher of mathematics, a fund of three hundred pounds has been secured, the income of which will be known as the William Jack prize. It will be awarded to the writer of the most meritorious thesis for the degree of doctor of science in mathematics at the University of Glasgow.

Let us note that MacRobert, who succeeded Gibson as professor of Mathematics at Glasgow University himself won the William Jack Prize in 1916.

William Jack was elected an honorary member of the Edinburgh Mathematical Society in March 1902.
Other Mathematicians born in Scotland
A Poster of William Jack