Born
16 January 1906
Leipzig, Germany
Died
31 May 2000
Wedel, near Hamburg, Germany
Summary
Erich Kähler was a German mathematician who worked in geometry and mathematical physics. His work is valuable in string theory. 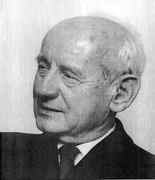 Erich Kähler's father Ernst Kähler was a telegraph inspector but had spent 12 years in the Navy as an oboist. Erich's mother was Elsa Götsch. Erich attended school in Leipzig. At first he was inspired by books his mother bought him about Sven Hedin, a Swedish explorer who led a series of expeditions through Central Asia and as a consequence made important archaeological and geographical findings. After wanting to to follow Hedin and be an explorer, Erich developed an interest in astronomy which by about the age of 12 developed into a love for mathematics. When he was about to start his final year at high school it was clear that he already knew so much mathematics he would not profit from the mathematics lessons. The principal of the high school, a Mr Donat, had taken university mathematics courses by Weierstrass and still had his lecture notes. He gave these to Kähler who, through studying them, learnt about the work of Gauss and about elliptic and abelian functions.

Kähler, while still at school, had the idea of writing a doctoral thesis on fractional differentiation. He wrote a 50 page thesis which he submitted to Hölder, asking if it would earn him a doctorate. He received the reply that most universities would make today, namely that one has to pursue a course of study before qualifying for a doctorate. He entered the University of Leipzig in 1924 and took a course on Galois theory in his first semester. He also read works by Gauss, Abel, Weierstrass, Riemann, Lagrange and got to know Artin personally. In addition to mathematics, he took courses on astronomy and physics. His thesis advisor was Leon Lichtenstein but Kähler chose himself the topic for his doctoral dissertation Über die Existenz von Gleichgewichtsfiguren, die sich aus gewissen Lösungen des n-Körperproblems ableiten Ⓣ. He was awarded a doctorate in 1928. He continued to study at Leipzig after the award of his doctorate, supported by fellowship from the Notgemeinschaft der Deutschen Wissenschaften.

In the summer of 1929 he was an assistant at the University of Königsberg. However, a meeting with Artin in Hamburg led to him being offered a position of assistant to Blaschke which he took up after completing his summer in Königsberg. He submitted his habilitation thesis on the integrals of algebraic differential equations to Hamburg in 1930 and became a Privatdozent. Blaschke was very impressed with his assistant and, in 1931, gave him a strong recommendation for a professorship at the University of Rostock. However Kähler found Hamburg an exciting and inspiring mathematical environment, so chose to remain there. The award of a Rockefeller fellowship enabled him to spend the academic year 1931-32 in Italy where he studied with Enriques, Castelnuovo, Levi-Civita, Severi, and Beniamino Segre.

In 1932 Kähler published Über eine bemerkenswerte Hermitesche Metrik Ⓣ in which he introduced the notion of what today are called Kähler metrics. This paper was the starting point for Kähler geometry with its notions of Kähler manifolds and Kähler groups which are today fundamental ideas in string theory and the study of space-time. In 1934 Chern came to Hamburg. He writes in [7]:-

I arrived in Hamburg in the summer of 1934. The University began in November and I attended, among other classes, Kähler's seminar on exterior differential systems. He had just published his booklet entitled Einführung in die Theorie der Systeme von Differentialgleichungen, which gives a treatment of the theory developed by Élie Cartan. [For my thesis I] received much advice from Kähler, from whom I learned the subject of exterior differential calculus and what is now known as the Cartan-Kähler theory. We had frequent lunches together at the restaurant Curio Haus near the Seminar. He told me many things, mathematical or otherwise. My gratitude to him cannot be overstated.

Kähler went to the University of Königsberg in 1935 and he was appointed an ordinary professor in the following year. His interests now moved towards mathematical physics and he lectured on the way that mathematics, physics and astronomy are related. In 1938 he married Luise Günther; they had a son Helmuth (born 1939), a daughter Gisela (born 1942), and a son Reinhard (born 1948). Reinhard [2]:-

... was handicapped and thus the more beloved by parents and siblings.

With the outbreak of World War II in 1939 Kähler was called up - his son Helmuth was two weeks old when the call-up papers arrived. In a way he was pleased to serve in the Navy since he was not then required to become involved in Nazi activities. The war then saw a break in his mathematical activities. Towards the end of the war he was stationed in Saint-Nazaire on the Loire River estuary, which was occupied by the Germans, who used the port as a major Atlantic submarine base. He was taken prisoner and put in the French prisoner of war camp on the Ile de Ré, in the Bay of Biscay. From there he was taken to another camp at Mulsanne near Le Mans. In fact it was a time when he was able to return to his mathematics since he had many friends among the French mathematicians who saw that he was allowed books and sent mathematics papers and books that he requested.

After he was released in 1947 he became a lecturer at Hamburg and was reunited with his family after the long forced separation. In 1948 he was appointed to the chair of mathematics at the University of Leipzig. The chair had been vacant following Paul Koebe's death in 1945. Berndt and Bohm write [2]:-

In retrospect the time in Leipzig was the most fruitful scientific period of Erich Kähler's life. ... [He] gave a five semester course with sometimes more than 10 hours of classes per week, in which he expostulated on algebra, algebraic geometry, function theory and arithmetic. The results presented in this course were then published in 1958 in a 399 pages volume of Annali di Matematica under the title "Geometria Aritmetica" Ⓣ.

This, in more ways than one, is an unusual piece of work. By its size, it is a book; it appears as a volume in a journal. The author is German; the book appears in Italian. The subject combines algebra and geometry, with some arithmetical flavouring; but the author, instead of following in his terminology the accepted usage in either one of those subjects, or adapting it to his purposes, has chosen to borrow his vocabulary from philosophy, so that rings, homomorphisms, factor-rings, ideals, complete local rings appear as "objects", "perceptions", "subjects", "perspectives", "individualities". The book includes altogether new material along with much which turns out to be quite familiar (sometimes to the point of triteness) once it is translated back into more familiar language; but no attempt is made to point out what may be novel and what is not so; there are no historical or bibliographical indications, no "Leitfaden", no introduction apart from a two-page philosophical discourse which ends up with the following statement: "... bibliographical references would probably have obscured the fact that a single philosophical tendency has been the real motive power behind the chain of my reasonings."

During his time in Leipzig, Kähler became increasingly unhappy with the East German government so when he had the opportunity to go to the Technical University of Berlin in 1958 he was quick to take it. Artin died at the end of 1962 and in 1964 Kähler was offered the vacant chair at Hamburg. He held this chair until he retired in 1974. These years in Hamburg were ones of great personal tragedy. His son Reinhard died in a rafting accident in August 1966. Kähler's wife became ill with leukaemia and died in 1970 [2]:-

Now in view of his personal suffering, his need became even stronger to find a connection of mathematics to chemistry, biology and even to theology and the ingenious mathematician became a mathematical dreamer who thought he could solve all problems of this world by mathematical methods.

He did, however, find some personal happiness when he married Charlotte Schulze in 1972. She was the widow of his brother who had died near the end of the war.

Typical of his attempts to bring mathematics and philosophy together is the paper Also sprach Ariadne (1992). Doru Stefanescu writes:-

The author considers various mathematical interpretations of some philosophical texts. He especially dwells on the theory of monades of Leibniz and on the work "Also sprach Zarathustra" of F Nietzsche. His speculative considerations are illustrated by suggestive examples from set theory, mathematical logic, abstract algebra and differential, algebraic and analytic geometry. He considers basic philosophic concepts such as Sein, Schein, monades, transcendental perception, pure reason, Sehkraft, and mathematical objects such as equivalence relations, polynomials, projections. The main thesis of the paper is that algebraic geometry is a prolegomenon to a mathematical theory of monades.

Among other contributions after he retired, we mention two further works. In The Poincaré group (1986) Kähler defines a new Poincaré group using the theory of quaternions and puts forward the hypothesis that a general theory of matter must be founded on this new Poincaré group. In Raum-Zeit-Individuum Ⓣ (1992) Kähler attempts to reformulate the Lorentz metric of space-time relativity physics in order to rid it of the purely imaginary time variable.

Other websites about Erich Kähler: