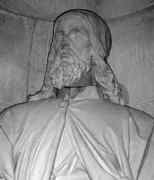 Ramon Llull was brought up at the royal court of Majorca. There he learnt Arabic from the Moorish population. Llull left Majorca in about 1265 after he experienced mystical visions of Christ on the Cross. He then undertook missionary work in North Africa and Asia Minor where he taught the pacifist doctrines on St Francis of Assisi.

Llull's main work is the Ars magna (1305-08), comprising of a number of treatises including The Tree of Knowledge and The Book of the Ascent and Descent of the Intellect. This work was inspired by another mystical experience related in [1]:-

About 1272, after another mystical experience on Majorca's Mount Randa in which Llull related seeing the whole universe reflecting the divine attributes, he conceived of reducing all knowledge to first principles and determining their convergent point of unity.

Llull used logic and mechanical methods involving symbolic notation and combinatorial diagrams to relate all forms of knowledge. This work makes him a precursor of combinatorics and this aspect is fully discussed in [3].

It is unclear exactly how Llull died. In [1] it is related that:-

... according to legend, Llull was stoned in North Africa at Bejaia (Bougie) or Tunis and died a martyr at sea before reaching Majorca, where he was buried.

Llull's reduction of Christianity to rational discussion, in which he attempted to prove the dogmas of the Church by logical argument, did not find favour after his death. In 1376 Pope Gregory XI charged Llull with confusing faith with reason and condemned his teachings. The Roman Catholic Church did however pardon Llull more quickly than Galileo, since he was venerated in the 19th century.

Llull's work is important for a number of reasons, one certainly being the great influence it had on Leibniz. One of Llull's early works on chivalry was translated into English and thought important enough by the early printer William Caxton that he edited and printed the work. Llull's mystical writings such as The Book of the Lover and the Beloved are still popular and his work has an important role in Catalan culture.
Quotations by Ramon Llull
Other Mathematicians born in Spain
A Poster of Ramon Llull

Other websites about Ramon Llull: