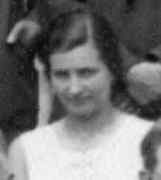 Sheila Scott's parents were James Alexander Scott and Helen Myers Meldrum. James Scott was born in Banchory. a small town on Deeside to the west of Aberdeen. He attended the University of Aberdeen and became a school teacher. He was rector of Trinity Academy Edinburgh from 1925 to 1942. Helen Meldrum was from Kilmuir Easter, in the County of Ross, just north of Inverness across the Moray Firth. She was the author of two books. Sheila was brought up in Edinburgh where she attended Trinity Academy Edinburgh and during the time that she was studying there her father was appointed rector of the Academy. She then attended Edinburgh Ladies' College, now renamed Mary Erskine School, from 1926 until 1928 when she graduated as Dux in Mathematics and joint Dux of the College.

In the same year, 1928, she entered the University of Edinburgh where she won several scholarships. She graduated M.A. with first class honours in mathematics and natural philosophy in 1932. It was usual for the top students in those days to study at Oxford or Cambridge University after taking their first degree at a Scottish University. Scott spent three years at Girton College at Cambridge. Her final year at Cambridge was one in which she undertook research under Mary Cartwright's supervision. She published her first paper on the work she had done under Cartwright's supervision On the asymptotic periods of integral functions in 1935.

Scott returned to Scotland to train as a teacher and she taught for five years in a number of schools from 1934. She taught mathematics for four years at St Leonard's School, an independent girls' school in St Andrews which was founded in 1877 in the buildings which had been St Leonard's College of the University of St Andrews. Scott then taught mathematics for a short time at James Allen's School for Girls. The oldest girls' independent school in London, this school was founded in 1741 and is situated in Dulwich, South London. After this, Scott spent another short period teaching mathematics, this time at Stowe School in Buckingham. This school had been founded in 1923 and had over 500 pupils when Scott taught there.

During this period Edmund Whittaker introduced Sheila Scott to Archibald James Macintyre who was a mathematics lecturer at Aberdeen University. They married on 27 December 1940 and the following year Sheila Macintyre was appointed as an assistant lecturer in the same department as her husband in the University of Aberdeen. At this time World War II was taking place and several of the mathematics staff at Aberdeen had been called up for war service. She taught courses at the university filling in for the men who were fighting and also undertook research for a Ph.D. thesis. In 1946, while she was pregnant with her second child, she gave up teaching but she continued to undertake research towards her doctorate. Sheila Macintyre completed her doctoral dissertation under E M Wright's supervision in 1947. Wright wrote:-

... good as her research was there would have been more of it had she not had a family to look after.

Her thesis Some Problems in Interpolatory Function Theory was submitted to the University of Aberdeen in 1947. In the same year she was awarded a Ph.D. Mary Cartwright writes [1]:-

The ideas of her thesis were entirely her own; starting from a paper by Wright on functional inequalities she pursued the problems involved into the field of interpolation series in which her husband was also interested.

Between 1947 and 1958 she published another ten papers during a period when she brought up her two children Alister William Macintyre (born 8 February 1944) and Susan Elizabeth Macintyre (born March 1950). A third child, a boy named Douglas Scott Macintyre, died from enteritis in March 1949 at age two. Having given up teaching in 1946, she was appointed as a Lecturer in Mathematics at the University of Aberdeen in 1949.

Cossar gives a summary of her research contributions in [2]:-

Mrs Macintyre's chief mathematical interest was the theory of functions of a complex variable, and from 1947 onwards she made regular contributions to the subject. Some of her earlier work of this period was concerned with integral functions of exponential type, and in particular included a determination of bounds for the value of the "Whittaker constant". Much of her work was on interpolation series associated with analytic functions. In a joint paper with her husband, convergence properties of the Abel series of a function, which had been discussed by several writers in the case of an integral function, were investigated for a class of functions regular in an angle. The Laplace transformation was applied here, as it had been by various previous writers on the theory of functions, notably by A J Macintyre. Mrs Macintyre later devised an integral transform in which the kernel was obtained from that of the Laplace transform by a process involving fractional differentiation, and applied it to extend the theory of the Gregory-Newton and Abel interpolation series. A long-standing conjecture on the convergence properties of the former was settled in one of her papers. In another, using results of the joint paper already mentioned, she solved a problem posed by Ramanujan in 1914.

Let us add a comment on Sheila and Archibald Macintyre's joint work. In volume 23 of the Journal of the London Mathematical Society (1948) there are two papers by the Macintyres. The first, by Sheila Scott Macintyre, is an 8-page entitled A functional inequality while the next paper, by A J Macintyre, is a 3-page paper entitled Note on the preceding paper. These two papers investigate a problem posed by E M Wright and give conditions on a real function f(x) and its derivatives to ensure that f(x)≤sinx in a certain interval. Sheila Macintyre proves two new theorems attacking Wright's question while Archibald Macintyre uses one the lemmas in Sheila Macintyre's paper to generalise a theorem proved by Wright in an earlier paper. A few years later, in 1952, the two Macintyres published a more conventional type of joint paper, namely the 2-author work Theorems on the convergence and asymptotic validity of Abel's series (mentioned by Cossar in the quote above) which was published in the Proceedings of the Royal Society of Edinburgh.

In 1956, in collaboration with Edith Witte, she published German-English mathematical vocabulary. The Preface begins:-

This book is designed to help English-speaking mathematicians to read German. The German mathematician wishing to speak or write in English will require more guidance in the choice of the appropriate English equivalent. The vocabulary covers a fairly wide field in pure mathematics, but applied mathematics, statistics and mathematical logic are not included.

Sheila Macintyre was an active member of the Edinburgh Mathematical Society and of the Mathematical Association. On 3 March 1958 she was elected a Fellow of the Royal Society of Edinburgh having been proposed for a fellowship by Edward Maitland Wright, Harold S A Potter, Charles Strachan, Reginald V Jones.

In 1958 Macintyre and her husband accepted visiting research professorships at the University of Cincinnati. They returned to Aberdeen in 1959 but, on 30 September of that year, Archibald Macintyre resigned his Senior Lectureship at Aberdeen so that he could take up a permanent post as Research Professor in Mathematics at Cincinnati. Sheila Macintyre resigned her Lectureship at the same time and was also appointed as a professor in the Mathematics Department at Cincinnati where she taught until her early death from breast cancer. She was a very successful lecturer at Cincinnati, being popular with both staff and students. James Alexander Scott, Sheila Macintyre's father, went to America with his daughter and her family. He settled there where he outlived Sheila Macintyre by three years.

In her chosen area of analysis, she introduced powerful refinements of techniques, and what is much harder, new and original problems for investigation.

Brilliant original mathematician though Sheila was, it is even more as the superb teacher and the gay helpful colleague that we remember her. Her clarity of mind made her a quite exceptionally able lecturer, but it was her warm-hearted interest in each of her students (combined with a shrewd assessment of their abilities) that made her so successful a tutor and regent. They repaid her by a very real affection and respect.

Other Mathematicians born in Scotland
A Poster of Sheila Scott Macintyre

Other websites about Sheila Scott Macintyre: