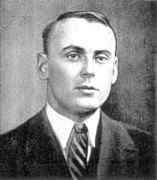 Józef Marcinkiewicz grew up with some health problems, in particular he had lung trouble, but this did not prevent him taking an active part in sports. Swimming and skiing were two sports at which he became particularly proficient. He had a schooling which resulted in a love of both mathematics and of Polish literature. He found making the decision as to which of these subjects to study at university a difficult one, and of course studying both was impossible. It was not that his training had lacked a science base, for he had a wide knowledge of physics and astronomy, but rather he just had broad interests. He decided to take a university course in mathematics but Polish literature would remain a hobby.

In the autumn of 1930 Marcinkiewicz entered the Division of Mathematical and Natural Sciences of the University of Stefan Batory in Wilno. The town was then in Poland but it had been known by its Russian name of Vilnius when it was the capital of Lithuania. The university there had been named after Stefan Batory who was king of Poland from 1575 to 1586. The university had three professors of mathematics, the most famous of them being Antoni Zygmund who was appointed in the year that Marcinkiewicz began his undergraduate course. Zygmund was undertaking research on trigonometric series and in 1931-32 he gave a course on this topic at Wilno for the first time. It was, by his own description, an ambitious course, with an course on Lebesgue integration preceding it. Zygmund writes that the course was [5]:-

... too difficult for the average student of the second year ...

Although it did not form part of his degree course, Marcinkiewicz asked Zygmund if he could take the course:-

... to my great pleasure he approached me without any prompting on my part. This was the beginning of our mathematical collaboration.

It is surprising that a professor would start a mathematical collaboration with an undergraduate in their second year of study but that is exactly what happened. Moreover, Zygmund explains that it was a rather natural thing to take place at the university:-

In the quiet and provincial pre-war Wilno a close contact between the student and professor was natural and easy, and we spent much time on mathematical discussions. The mathematical development of Marcinkiewicz was progressing at a very fast rate and the richness and originality of new ideas in him was always a source of amazement to me.

In 1933, after three years of study, Marcinkiewicz was awarded his Master's degree. He had already obtained important new mathematical results and the thesis that he wrote for his Master's degree contained them. In particular he had found a continuous periodic function whose trigonometric interpolating polynomials, corresponding to equally spaces mesh points, diverge almost everywhere.

Two years later Marcinkiewicz was awarded his doctorate, something which would be impressive enough if he had spent two years working for it, but he did not have this luxury since he had to undertake a years military service immediately after the award of his Master's degree. Once he had completed military training he was appointed as a junior assistant at the university in Wilno. His doctoral thesis Trigonometric interpolation of absolutely continuous functions was an extended form of the work which he had submitted for his Master's degree. He received the doctorate in 1935.

After being awarded his doctorate, Marcinkiewicz received a Fellowship from the Fund for National Culture which enabled him to spend a year at the University of Lwów (now Lviv in Ukraine). There he collaborated with Julius Schauder who had returned to Lwów a year earlier having spending time in Paris working with Hadamard and Leray. Zygmund writes [5]:-

The influence of Schauder was particularly beneficial and would probably have led to important developments had time permitted. For in the field of real variable Marcinkiewicz had exceptionally strong intuition and technique, and the results he obtained in the theory of conjugate functions, had they been extended to functions of several variables might have given (as we see clearly now) a strong push to the theory of partial differential equations. The only visible trace of Schauder's influence is a very interesting paper of Marcinkiewicz on the multipliers of Fourier series, a paper which originated in connection with a problem proposed by Schauder ...

During his year in Lwów, Marcinkiewicz also collaborated with Kaczmarz. He suggested problems on general orthogonal systems to Marcinkiewicz and this resulted in a series of papers from him on this topic.

Returning to Wilno in the autumn of 1936, Marcinkiewicz became a senior assistant there, and in the following year he became a Dozent. Perhaps through his contacts with Schauder, who had greatly benefited from his time in Paris, Marcinkiewicz applied to the Fund for National Culture for another Fellowship, this time to study in Paris. He was successful and in the spring of 1939 he went to Paris. While he was there he received an offer of a Chair of Mathematics at the University of Poznań, and was awaiting approval of the post by the Ministry of Education so that he could take it up at the beginning of the 1939-40 academic year.

From Paris Marcinkiewicz went to England and he was there in August 1939 when the deteriorating political situation made him decide to return to Poland. His colleagues in England tried to persuade him to stay, rather than return to Poland, but through his years military training he was an officer in the army reserve and felt that it was his duty to his country to return.

War broke out a few days after Marcinkiewicz returned to Wilno. Zygmund writes [5]:-

On September 2, the second day of the war, I came across him accidentally in the street in Wilno, already in military uniform ... We agreed to meet the same day in the evening but apparently circumstances prevented him from coming since he did not show up at the appointed place. A few months later came the news that he was a prisoner of war and was asking for mathematical books. It seems that this was the last news about Marcinkiewicz.

During his time in Paris and England, Marcinkiewicz had produced some mathematical work which he had written down in manuscript form. After returning to Poland he gave these manuscripts to his parents for safe keeping. Sadly Marcinkiewicz's parents suffered the same fate as he did and died during the war. No trace of the manuscripts was ever found.

Zygmund tells us in [5] a little about Marcinkiewicz as a person:-

[He was] a tall and handsome boy, lively, sensitive, warm and ambitious, with a great sense of duty and honour. He did not shun amusement, and in particular was quite fond of dancing and the game of bridge.

Other Mathematicians born in Poland
A Poster of Józef Marcinkiewicz

Other websites about Józef Marcinkiewicz: