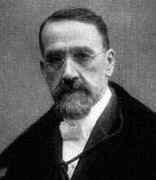 Joseph Neuberg's father was a merchant from an old Luxembourg family of farmers, several generations having lived in the town of Mersch, about 18 km north of Luxembourg City. Joseph's mother came from Schifflange, about 12 km south west of Luxembourg City. He was the second of his parents' seven children, having one younger brother and five sisters. When he reached school age his parents sent him to primary school having decided that he would follow in his father's footsteps and make a career in commerce. However, he made rapid progress at school, having a remarkable memory and intelligence. When he left school after four years of study, he was certain that he wanted to continue with his education rather than become an apprentice learning a trade. His parents were quite determined that their son should continue to follow the plans that they had made for his future and it was only through considerable determination by the young Neuberg that, one year after he left the primary school, he was able to enter the Athénée of Luxembourg in October 1853.

At the Athénée de Luxembourg he was able to start his studies without taking the preparatory class. His work was outstanding, and he was placed first in his final years at the school. He took his maturity examinations in July 1859 and produced a performance that was equally brilliant in all the subjects in which he was examined. An all-round talent, he showed the same outstanding abilities in both arts and science subjects. After completing his school education in Luxembourg, Neuberg went to Belgium to undertake his university studies. In Brussels in October 1859 he took the examinations which were necessary to become a university student, and then he went to Ghent where he took the entrance examinations for the École normale des Sciences which was part of the Faculty of Sciences at the University of Ghent. Here he was one of a small number of students so they received an excellent education preparing them to become teachers in secondary schools or colleges. He graduated in July 1862 and so did not meet his future collaborator Paul Mansion who began his studies to the École normale des Sciences three months after Neuberg graduated.

The first part of Neuberg's career was spent in various colleges. He was a temporary teacher of mathematics at the École Normale de Nivelle from November 1862 to October 1865, then a teacher at the Athénée Royal d'Arlon from October 1865 to December 1867. It was while he was at the Athénée Royal d'Arlon that, in 1866, he married Fanny Reuter from Luxembourg. Joseph and Fanny Neuberg had two daughters, Louise and Maria. Louise married M Ries, who was a director of Luxembourg railways, while Maria was very religious and entered the Sisters of Notre-Dame. Neuberg was a teacher at the Athénée Royal and the École Normale at Bruges from January 1868 to April 1878. His wife Fanny died in 1877 and, in the following year, he married Maria de Gruytters; they had one daughter (1880-1914) and one son (1884-1920) who died fighting with the Belgium army during World War I. These tragedies were not the only ones to bring deep sadness to Neuberg's life for Maria, his second wife, died in 1904.

After leaving Bruges in 1878, Neuberg was appointed as a teacher at the Athénée Royal of Liège, holding this position from May 1878 to December 1884. In parallel with this position, he was also a lecturer at the École des Mines from October 1878 to October 1880, then he was promoted to professor at this college holding this position from October 1880 to October 1884. After nearly twenty years of wanting to become a university teacher, during which time he had produced a huge research output, Neuberg was appointed as an extraordinary professor at the University of Liège in 1884 and was promoted to ordinary professor there in 1887, holding this chair until he retired on 30 October 1910. Although when he was appointed to the university post he resigned from his position at the Athénée, he retained his professorship at the École des Mines until October 1911. At the University of Liège he taught analysis, higher algebra, descriptive geometry, projective geometry, analytic geometry, and the foundations of mathematics. At the École des Mine he taught higher algebra, analytic geometry and infinitesimal analysis. After he was promoted to professor he also gave a course on mathematical methods for students who were studying for a doctorate in mathematics and physics. He was made professor emeritus by the University on 27 December 1911.

Neuberg worked on the geometry of the triangle, showing great ingenuity, discovering many interesting new details but developing no large new theory. Pelseneer writes in [1]:-

The considerable body of his work is scattered among a large number of articles for journals; in it the influence of A Möbius is clear. In general, his contribution to mathematics lies in the discovery of new details, rather than in any large contribution to the development of his subject.

Together with Henri Brocard and Émile Lemoine, he is considered as the creators of the geometry of the triangle and of the tetrahedron. He was also involved in the study of various algebraic surfaces, including the cyclide of Dupin, geometry of ruled surfaces and curves arising from linkages. In the early part of his career he published papers in the Nouvelles Annales de Mathématiques on inscribed and circumscribed conics, as well as on the geometry of the triangle. Examples of these papers are Démonstration de quelques théorèmes de M Faure Ⓣ (1868), Triangles et coniques combinés Ⓣ (1870) and Théorie des indices des points, des droites et des plans par rapport à une surface du second ordre Ⓣ (1870). During the years that Nouvelle correspondance mathématique appeared (1874-1880), Neuberg published 24 papers in the journal such as Sur les polygones circonscrits à une conique et inscrits à une seconde conique Ⓣ, Quelques propriétés du triangle, Sur les triangles homologiques Ⓣ, and Sur les points de Brocard Ⓣ. In Mathesis he published well over 100 papers as well as contributing a wide variety of notes and questions. He published three memoirs: Études sur les coordonnées tétraédriques Ⓣ; Mémoire sur le tétraèdre Ⓣ; and Sur les projections et contre-projections d'un triangle fixe et sur le système de trois figures semblables Ⓣ. In the year he retired, 1911, he published the interesting historical work Vie et oeuvre de Grégoire de Saint-Vincent Ⓣ about the 17th century Belgium mathematician Gregory Saint-Vincent who spent much of his career teaching in Ghent. Certainly he did not lessen his contributions to mathematics following his retirement and he continued to publish papers and undertake editorial work for Mathesis.

Ad Mineur, who edited 'Mathesis' with Neuberg after it restarted publication in 1922, wrote about Neuberg's last days in [6]:-

Towards the end of December 1925 he suffered from what he described as a bad cold but what was actually a severe dose of bronchitis. But this had not prevented him from working, and though his letters had been less frequent, I had learned of his illness at the same time as his recovery, for he had found it useful to make me aware of the risk having got through it safely. I did not fail to congratulate him on his recovery and to add my customary good wishes for the new year, one to celebrate the fiftieth anniversary of 'Mathesis' with him. He replied that he felt that his recovery was more apparent than real and that he felt too old to realise the fulfilment of my wish, adding that I would celebrate alone the fiftieth anniversary of 'Mathesis'. Alas, it was so, he should have been celebrating the fiftieth anniversary of the founding of the 'Mathesis' last January, but his memory and that of Mansion meant that I had to be alone, as he had predicted, to celebrate this anniversary, preferring to wait until the fiftieth volume of 'Mathesis' to remember its foundation.

As a lecturer Neuberg had a high reputation, as Lucien Godeaux recalls in [4]:-

A teacher with remarkable clarity, Neuberg was total dedicated to his students. Despite heavy teaching loads, he organised exercise sessions for students of the Physical Sciences and Mathematics, thus filling a serious gap in the programmes. He published his lessons on Infinitesimal Analysis, on Higher Algebra and on Analytic Geometry; these works were a great success.

Other websites about Joseph Neuberg: