Born
25 September 1893
Kiev, Ukraine
Died
20 November 1986
Montagnola, Lugano, Switzerland
Summary
Alexander Ostrowski was a Ukranian-born mathematician who worked on a wide variety of topics in both analysis and algebra. 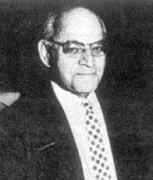 Alexander Ostrowski's father Mark Ostrowski was a merchant in Kiev. Alexander's mother was Vera Rashevskaya. He attended primary school in Kiev, then spent a year at a private school before entering the Kiev School of Commerce. Faddeev in [6] (see also [7]) recalled what B N Delone told him concerning Ostrowski meeting D A Grave, then the head of the mathematics school at Kiev. In 1908 Ostrowski, then a fifteen year old schoolboy:-

... a pupil at the school of Commerce who had shown considerable interest in mathematics, came to Grave on the recommendation of his mathematics teacher. After several talks, Grave was convinced of his remarkable abilities and accepted him in his seminar as a full and equal participant.

For three years Ostrowski participated in Grave's seminar while completing his course at the School of Commerce. In 1911 he was awarded the title of Candidate of Commerce and he was awarded the Gold Medal. Ostrowski had not been a mere observer in Grave's seminar during these years, however, for by the time he completed his studies at the College of Commerce he had already found original results on Galois fields and had written his first paper with Grave's assistance.

It would seem natural that this extraordinarily well qualified student would be more than welcome to begin his formal studies of mathematics at Kiev. Few student can begin their studies having already written a mathematical paper. Life is often not that simple, however, since there was a quota on the number of Jewish students allowed into the university and entrance was decided by a lottery rather than on merit. Ostrowski did poorly in this lottery and permission was not granted so Grave wrote to Edmund Landau and Hensel in Germany asking for their help.

Both Landau and Hensel offered to help solve Ostrowski's problem and invited him to Germany. Ostrowski accepted Hensel's offer of a place at the Marburg University and in 1912 he began his studies there under Hensel's supervision. Although it looked as though Ostrowski's problems were over, World War I would soon put him back in difficulty again. In the autumn of 1914, after the outbreak of war, Ostrowski was interned as a hostile foreigner. Hensel pleaded with the authorities on Ostrowski's behalf and although his movements remained severely restricted, he was allowed to use the library at Marburg University.

The isolation enabled him to concentrate fully on his investigations. He read through mathematical journals, in his own words, from cover to cover, occupied himself with the study of foreign languages, music and valuation theory ...

When the war ended in 1918, Ostrowski was free to move around Germany and he went to Göttingen where Klein, Hilbert and Landau were major influences on him. He worked at Göttingen for his doctorate under Hilbert and Landau and it was awarded with distinction in 1920. His doctoral dissertation was published in Mathematische Zeitschrift in 1920, being his fifteenth publication. The results of this work allowed Ostrowski to solve Hilbert's Eighteenth Problem

From Göttingen Ostrowski went to Hamburg in 1920 to work for his habilitation as Hecke's assistant. He worked there on a problem proposed by Hilbert on modules over polynomial rings and he was awarded his habilitation in 1922. The following year he accepted a lecturing position at Göttingen.

After being awarded a Rockefeller Research Fellowship, Ostrowski spent the academic year 1925-26 in Britain, spending periods at each of the universities of Oxford, Cambridge and Edinburgh. He had not been back in Göttingen for long when he was offered the chair of mathematics at the University of Basel. He accepted this appointment and he remained at Basel until he retired in 1958.

If Ostrowski had been unfortunate in being in the wrong place at the wrong time for World War I, he was much more fortunate when World War II broke out, being in the neutral country of Switzerland. It did give him some minor difficulties to solve over his German publishers but this only pushed him in the direction of the publisher Birkhäuser with its headquarters in Basel. This had the side effect of pushing Birkhäuser to the forefront as a publisher of mathematics and to this day it has retained this major mathematical publishing role.

Ostrowski married Margaret Sachs in 1949. She was a psychoanalyst who had been a student of the famous Carl Gustav Jung. From this time onwards Ostrowski concentrated fully on his mathematics while his wife completely organised the rest of their lives. It was an arrangement which suited Ostrowski very well indeed.

When we remarked above that Ostrowski "remained at Basel until he retired" this was not meant to imply that he did not travel. On the contrary he travelled widely, especially in the United States where he lectured during the 1960s at the University of Wisconsin at Madison, the University of Indiana at Bloomington, Columbia University in Washington D.C., and Brown University in Providence.

His association with the United States was not restricted to the many universities he visited, for he in the 1950s had a close association with the National Bureau of Standards, first at the Institute for Numerical Analysis at Los Angeles and later in Washington, and this fitted in well with his increasing interest in numerical methods. Gautschi writes in [8]:-

... exciting problems of pressing significance began to burst forward at this time and demanded nothing less than farsighted and imaginative approaches.

Ostrowski had an impressive publication record of around 275 works. The topics which he published on are gathered together under sixteen headings in [9]. These are determinants, linear algebra, algebraic equations, multivariate algebra, formal algebra, number theory, geometry, topology, convergence, theory of real functions, differential equations, differential transformations, theory of complex functions, conformal mappings, numerical analysis and miscellany. Despite the quantity of his works it is the remarkable quality which stands out [7]:-

The works of Ostrowski win one over by their lucidity, elegance, and wit. He himself noted that clarity must go before elegance. His "Mathematical miscellany" should be singled out - these are true pearls in the mathematical literature. Ostrowski's persistence manifested itself in the fact that, once he selected a topic, he investigated it exhaustively, not leaving any open questions. His ability and subtlety in the art of estimates are legendary; in this he was a consummate master!

To illustrate some of the areas which Ostrowski wrote on we mention his results on the theory of norms of matrices and the applications to finding inequalities, to studying methods to solve linear systems, and to the methods for both finding and approximating eigenvalues. His work on algebraic equations involved a study of the fundamental theorem of algebra, Galois theory, and estimating the roots of algebraic equations.

He gave a definitive version of the theory of valuations in 1934 after publishing initial results in 1917. On number theory he studied a variety of topics including Waring's problem, Diophantine approximation and some problems in algebraic number theory. Other work of Ostrowski was on the Cauchy functional equation, the Fourier integral formula, Cauchy-Frullani integrals, and the Euler-Maclaurin formula.

The article [8] is addressed to Ostrowski on his ninetieth birthday and, in addition to looking at specific examples of his work in linear algebra, it describes the characteristic features of his mathematics:-

... you are able, on the one hand, to emphasise the abstract and axiomatic side of mathematics, as for example in your theory of general norms, or, on the other hand, to concentrate on the concrete and constructive aspects of mathematics, as in your study of numerical methods, and to do both with equal ease. You delight in finding short and succint proofs, of which you have given many examples ...

Faddeev ends his artice [7] with these words:-

Alexander Markowich deserves the kindest memories as a brilliant personality, a powerful mathematician, and a good human being.

Other Mathematicians born in Ukraine
A Poster of Alexander Ostrowski

Other websites about Alexander Ostrowski: