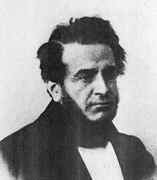 Olinde Rodrigues has been a somewhat obscure figure in the world of mathematics and some details of his life are reported differently by different historians. Recently, in [2], a more accurate picture of Rodrigues has been established. The information we present below has been corrected as far as possible using the biographical details presented in [2].

Olinde Rodrigues's father was Isaac Rodrigues (30 March 1771 - 8 September 1846), a bookkeeper, and his mother was Sara-Sophie Lopes-Fonseca (11 January 1776 - 18 February 1846). Isaac and Sara-Sophie had eight children, of whom Olinde was the eldest. We certainly know that he did not use his first name Benjamin and was known as Olinde Rodrigues. In fact Olinde was not one of his given names. Rather in 1807 Jews living in France were required to modify their family names and in the following year they were required to add a name of French origin. At this point Olinde was added to Rodrigues names. It is a slightly unusual name, but the explanation for this is quite logical. The family were Jewish and wished to obey the directive yet not give Rodrigues the name of a Christian saint. Sometimes in later life he used the name Benjamin-Olinde.

Rodrigues was born into a Jewish family which was almost certainly of Spanish origin (although some claim that the family were of Portuguese origin). We described his father Isaac as a bookkeeper since that occupation appears on some records, but a more accurate description of Isaac's occupation would be banker and stockbroker. He was a well-read man who published a treatise on accountancy in 1804 and a manual on the topic in 1810. Isaac had taken his family to Paris in the late 1790s. There Isaac worked for the banker Fould and later, remaining in Paris, he became an independent stockbroker. Olinde entered the Lycée Impérial (now the Lycée Louis-le-Grand) in Paris. Chasles was a contemporary of Olinde at the Lycée Impérial and both sat the entrance examinations for the École Polytechnique and École Normale in 1811. Rodrigues was ranked first in the competitive examination while Chasles was ranked second. In 1812 (at the age of 17) Olinde was a class assistant for the mathematics course at the Lycée Napoleon.

The École Polytechnique was the most famous of the Paris universities and most historians suggest that Rodrigues could not attend it as he was a Jew. However in [2] doubt is cast on this since there are records of a small number of Jews attending the École. Despite coming top in the entrance examination, Rodrigues chose to enter neither of the two famous Écoles, instead entering the University of Paris. By private arrangement, Rodrigues tutored a student of mathematics at the École Polytechnique, Prosper Enfantin, and the two would later jointly lead a socialist movement. Rodrigues was awarded a doctorate in mathematics from the Faculty of Science of the University of Paris in 1816 for a thesis that contains one of the two results for which he is known today, namely the Rodrigues formula for Legendre polynomials: P_{n} = \large\frac{1}{(2^{n}\normalsize}n!) ^{d\large\frac{n}}{dx^{n}\normalsize} [(x^{2} - 1)^{n}]. He may have been advised by Lacroix who was certainly chairman of the examining committee. Rodrigues published his results in Memoir on the attraction of spheroids. After this Rodrigues became a banker and became a relatively wealthy man as he supported the development of the French railway system [2]:-

By the time Rodrigues got his doctorate, the good years for the reformers were coming to an end and with them any possibility of Rodrigues becoming an academic mathematician. After the 1815 Restoration the Catholic hierarchy took control of educational and academic institutions ... Whatever Jewish mathematicians there were could not obtain teaching positions, and most of them abandoned the subject or used their mathematical abilities in applied work for private enterprises.

Rodrigues was involved with the Claude Henri de Rouvroy, the Comte de Saint-Simon, who was an early advocate of socialism. Saint-Simon was, like Rodrigues, a rich man who had made money during the French Revolution. However, he had dreams of a better world improved by the scientific and social reform of mankind. He gathered some famous scientists around him in support of his beliefs, including Monge and Lagrange. He also brought on board bankers who could help finance his schemes but things did not go well and he was soon penniless and having to borrow money. Rodrigues was attracted by Saint-Simon's ideas of social reform and was a staunch supporter. In 1823 Saint-Simon attempted to kill himself but Rodrigues came to his rescue, nursed him back to health, and provided him with the necessary financial support to see out the rest of his life. This was not long for Saint-Simon died in 1825. As he was dying he said to Rodrigues:-

Remember that to do anything great you must be impassioned.

The Saint-Simonian School grew up with Saint-Simon's unfinished book Le nouveau christianisme Ⓣ providing its basic philosophical basis. The School argued that industrial production was most important for society and this would support a peaceful social organisation which would rapidly improve the lot of the poor. Rodrigues was one of two joint leaders of the Saint-Simonian School, the other being his former student Prosper Enfantin. The two were also founders of the review Le Producteur which attacked the notion of competition. Rodrigues argued that working men were kept poor by lending at interest and by inheritance. Saint-Simon had been persuasive indeed to have the banker Rodrigues argue against lending without interest! Rodrigues also argued in favour of mutual aid societies and profit-sharing for workers.

By 1832 Enfantin began to argue for extreme views, particularly on sexual freedom, which went further than Rodrigues was prepared to go and Rodrigues left the Saint-Simonian School, declaring himself the true disciple of Saint-Simon. In August 1832 Rodrigues was arrested and charged with organising illegal meetings and outraging public morality. He was fined fifty francs.

The Paris Ethnological Society as set up in 1839 to:-

... investigate the physical organization, intellectual and moral character, languages and historical traditions of the human races and to establish the degree of their intelligence and culture.

Rodrigues joined the Paris Ethnological Society. He argued strongly that all races had:-

He also argued that women had equal aptitude saying that:-

... women will one day conquer equality without any restriction.

These views were much criticised by other members of the Paris Ethnological Society who argued that Rodrigues was being sentimental and that science proved that he was wrong.

Most of Rodrigues' writings were on politics and social reform but he also wrote pamphlets on banking. In 1840 he published a mathematical paper which contains the second result for which he is known today, namely his work on transformation groups where he derived the formula for the composition of successive finite rotations by an entirely geometric method. Rodrigues' composition of rotations is basically the composition of unit quaternions. The paper appeared in volume five of the Annales de mathématique pures et appliquées which was perhaps better known as Annales de Gergonne and is described in detail in [4].

The story of the Rodrigues formula for Legendre polynomials is somewhat more complicated due to the fact that Rodgigues' paper on the subject does not appear to have been noticed at the time, or if it was then it was quickly forgotten. Ivory and Jacobi published an article in the Annales de mathématique pures et appliquées in 1835 giving a proof of the same result which both Ivory and Jacobi had discovered independently. They did not know of the earlier paper of Rodrigues and as a result the formula became known as the Ivory-Jacobi formula for some time. However, in 1860, Hermite came across the original paper by Rodrigues.

Rodrigues gave a generating function for the number of inversions. In the example we have given the generating function is
1+2q+2q2+q3=(1+q)(1+q+q2)
Several mathematicians worked on this problem after Rodrigues, such as Netto and MacMahon, but they did not know of Rodrigues' fine piece of work. These ideas are now important in group theory and group representation theory, but sadly Rodrigues did not influence this work as his results were missed until 1970 when Leonard Carlitz discovered Rodrigues' contribution.

Really Rodrigues was remarkably poorly appreciated by his contemporaries both as a mathematician, where he showed remarkable intuition in studying important problems, and as a social reformer where many of his views have at last become the accepted ones.

As a second footnote, we remark that Rodrigues has many incorrect references to him in the mathematical literature. Élie Cartan thought that Olinde Rodrigues was two separate people, one called Olinde and one called Rodrigues. Several later authors, such as Temple, repeated Cartan's error.
Other Mathematicians born in France
A Poster of Olinde Rodrigues