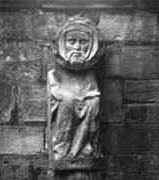 Michael Scot (or in latinized form Michael Scotus) is a figure of both history and legend making him elusive to discern. Although believed to have come from the area bordering Northern England and Southern Scotland, doubts on his origins had been cast, since in 1223, he declined the position of Archbishop of Cashel in Ireland by claiming that he was ignorant of gaelic. However, the use of gaelic is not widespread in Southern Scotland (as opposed to the North), and given that Scot had broken the barrier of several languages with no impediment to his functions, this claim may have been exaggerated as an excuse to refuse the offer. In a letter to Stephen Langton dated in 1227, Pope Honorius III described Michael as ardently devoted to letters and science from boyhood up . Thorndike infers him as a Fatherless boy raised by his uncle. Sir Walter Scott identified him with the Sir Michael Scot of Balwearie, sent in 1290 on a special mission to Norway, but this is rejected by most historians. However, a connection to minor nobility is not ruled out given the cost of education at that time. His education allegedly begins at the cathedral school of Durham and includes Oxford and the University of Paris where he studied Mathematics, Astrology (which included Astronomy), Alchemy and Medicine.

The earliest documented record of his life and work is dated 18 August 1217 in Toledo Spain, where Michael Scot completed the translation from Arabic into Latin of al-Bitruji's Alpetragius the first work to present a non-Ptolemaic astronomical system. Michael was part of the Toledan school of Translation, and assisted by Jewish scholars under the direction of the Archbishop Rodrigo Jiménez de la Rada who played a key role in the battle of Las Navas de Tolosa against the Muslim Almohads in 1212. This school had already hosted famous translators such as Gherard of Cremona (1114-1187) in the previous century.

A recent study [12] based on a passage written by Michael Scot on multiple rainbows, a phenomena only understood by modern physics and recent observations, suggests that Michael Scot may have been in contact with the Tuareg in the Sahara desert.

By 1227-8, Michael Scot and Leonardo Fibonacci were both in the court of Frederick II Hohenstaufen (1194-1250), ruler of the Holy Roman Empire. Both would play their part in transmitting much of the scientific knowledge of the Muslims (mainly from Moorish Spain) into Europe (mainly Italy and Sicily), thereby planting many of the seeds of the scientific developments surrounding the Italian Renaissance. Scot is said to have been an imperial tutor but manuscripts give him the title of "astrologer". Scot had written a number of books but his most significant contributions are through other people and related to his work on translations. The second version of Leonardo Fibonacci's famous book on mathematics, Liber Abaci, was dedicated to Michael Scot in 1227. The school of Toledo had made translations of the works of Al-Khwarizmi and perhaps even those of Abu Kamil. Leonardo used them substantially for this Liber Abaci. It has been suggested that Michael Scot might have even played an indirect role in the presentation of the Fibonacci sequence. Scot's translations of Historia animalium, a zoological natural history text by Aristotle with commentaries by Ibn Rushd (Averroes), would help Frederick write his own famous book on falconry. This book, published in 1240 as De Arte Venandi cum Avibu ("The Art of Hunting with Birds"), is considered to be one of the earliest studies on bird behaviour and the first work known to include illustrations of birds.

Frederick sent Scot to communicate his translations and other scholarly works at prominent European Universities including Oxford where Scot met a young Roger Bacon. Scot also explored the Lipari islands, attempting to understand, in alchemical terms, the now realized connection between volcanic activity and the presence of gold. For example, it is known that the California Gold rush of 1849 was prompted by the outcome of such volcanic activity.

The importance of Frederick's court may have been exaggerated by some (for example, [2] and [5]). Nevertheless Frederick II authorized the first autopsies over the protests of the Roman Catholic church, as better knowledge of the human anatomy was vital for the improvement of medicine. In 1543, the same year that Copernicus wrote his treatise on Astronomy De revolutionibus orbium coelestium ("On the revolutions of the Heavenly Spheres"), Andreas Vesalius wrote his treatise on anatomy De Humani Corporis Fabrica ("On the structure of the human body"). Human dissections had revealed many anatomical errors by the ancient Greek physician Galen. This and other threads of scientific discovery can be traced to Frederick's court. During the "dark ages", the issue was not entirely the unavailability of books, many of which had been destroyed during the fall of the Roman Empire. The very "scientific culture" surrounding these books had been forgotten. However, Muslim scholarship had retained a better collective memory of the works of the ancient Greeks and other cultures, and Michael Scot played a connecting role in bringing this knowledge into Europe. Scot's own contributions have both been obscure and misunderstood in part because he lived in an time where science, superstition, religion and belief in magic coexisted together in a messy undisciplined body of thought, a "prehistory" of science. For example, modern-day notions of what is called Astrology and Astronomy were fused together at that time (and even in Kepler's time) in one body of thought called "Astrology". Nonetheless, Scot was observant. His very meticulous description in Latin concerning the medical case of "Mary of Bologna" dismissed as a "calcified fibroid tumor", was realized in the 1970s to be the description of a very rare case of miscarriage or "spontaneous abortion", not followed by immediate expulsion, of twin embryos, dead at different dates and calcified.

Scots works, largely unfinished, dealt principally with Astrology, Alchemy and "magic" but also included meteorology, music and and various commentaries of a specialized nature. Some censure was passed upon his writings by Albertus Magnus (Albert the Great); some praise and some abuse from Roger Bacon (but few are grateful to their creditors). His magnum opus, his Liber Introductorius maior in astrologiam ("Great Book on the introduction to Astrology"), is divided into three sections: Although well viewed by the papal authorities around 1227, Scot would acquire the sinister reputation of a magician or wizard and would be condemned to the inferno in Dante Alighieri's epic poem, The Divine Comedy only to be "rescued" much later on in Sir Walter Scott's poem Lay of the Last Minstrel.
Other Mathematicians born in Scotland
A Poster of Michael Scot

Other websites about Michael Scot: