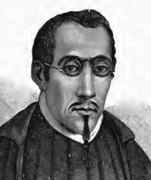 Siguenza y Gongora's father was a tutor to the royal family in Spain before sailing to Mexico (then known as New Spain) to make his life in the new world. Siguenza was educated at home, his father being well able to provide the education his son needed. In 1662 Siguenza took his first religious vows in the Jesuit College in Tepoztlan where he had begun his training for the Church. From there he moved to Puebla to continue his religious studies at the College of the Holy Spirit.

The town of Puebla, 130 km southeast of Mexico City, was characteristically Spanish and had been founded over one hundred years before as Puebla de los Angeles in 1532. It was a great religious centre and a natural place for Siguenza to study. However, in 1667 Siguenza was expelled from the College for failing to observe the correct discipline. He returned to Mexico City to study at the university there.

The University of Mexico was founded in Mexico City as the Royal Pontifical University by Antonio de Mendoza who was the first viceroy of New Spain. The university was controlled by the Roman Catholic church so, in entering this university, Siguenza was still maintaining his connections with the Church despite the expulsion from the College in Puebla. He also remained a priest, despite the expulsion, and was chaplain to the Amor de Dios Hospital in Mexico City. In 1672 Siguenza was appointed to the chair of mathematics at the University. He was to hold this appointment for 20 years and contribute not only to mathematics but also to astronomy and cosmography.

Siguenza's writings did not always find favour with the Church. Father Eusebio Kino was a Jesuit missionary. He had been educated in Germany, studying mathematics and astronomy, and then entered the Society of Jesus before being sent as a missionary to Mexico City in 1681. Siguenza had published a work in that year which was intended to calm public fears over the appearance of a comet. In reply to criticism of this work, he also published El Belerofonte matematico in the same year.

Father Kino strongly disagreed with Siguenza's ideas and published his criticisms. Not one to be intimidated by Jesuit arguments, Siguenza made a strong response to Father Kino's criticism, publishing Libra astronomica y philosophica in 1670. This was [1]:-

In cosmography, Siguenza made maps of New Spain (the first by someone born in that country), a map of the lakes in the Valley of Mexico, and a map of Pensacola Bay, now northwestern Florida in the United States. There had been Spanish settlement on the coast of the bay from 1559 but the settlement was abandoned in 1661. Siguenza's map of the bay was made in 1693 at a time when New Spain were still interested in the area. In fact Siguenza was sent there to investigate the bay with an admiral, and the diary he kept and charts he made are of great value.

Siguenza intended to write a history of ancient Mexico and spent much time collecting material for this work. It was very unfortunate that his early death prevented him from writing the history, and the extremely valuable manuscripts which he collected were sadly lost.
Other Mathematicians born in Mexico
A Poster of Siguenza y Gongora

Other websites about Siguenza y Gongora: