Born
28 May 1872
Vorderbrühl, near Vienna, Austria
Died
5 September 1917
Kraków, Poland
Summary
Marian Smoluchowski was an Austrian physicist who was a pioneer of statistical physics. 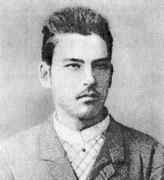 Marian Smoluchowski's parents were Wilhelm Smoluchowski and Teofila Szczepanowska. Wilhelm and Teofila had five children, three boys and two girls. However one son died in the same year that he was born and one daughter died at about five years of age. Marian had a brother Tadeusz who was four years older and was a significant influence on him as he grew up. Marian's father Wilhelm had trained as a lawyer then worked in the Imperial Office as a high ranking member of Franz Joseph's privy council. He [7]:-

... was a stern but very loving man who observed rigorously rules, traditions and titles, including his own.

Marian's mother Teofila was much younger than his father. She was [7]:-

... a cultured and deeply musical person whose Polish traditions made a strong impression on her son. It was through her influence that Smoluchowski became, like his mother, an expert pianist ...

In addition to his parents, an important influence on Marian as he grew up was Benigna Wolska, his mother's sister, who lived in a hill top suburb of Florence. Marian spent several week there every year throughout his childhood and enjoyed Benigna's home which was always filled with music. Benigna was both a fine pianist and singer who often held concerts in her home.

Marian attended the Collegium Theresianum in Vienna between 1880 and 1890. This was a very good school which was specifically intended for the children of high ranking officials like his father. At this school Marian was at first attracted by the humanities and it was not until late in his school education that he became fascinated by physics and astronomy. This change in direction came about as a result of outstanding teaching by Alois Höfler, a physics and philosophy teacher at the school. He formed friendships with Fritz Hassenöhrl and Kazimierz Twardowski, two of his fellow students at the school, which lasted throughout his life. One of Smoluchowski's life long passions was climbing and he was introduced to this while still at school by his brother Tadeusz [7]:-

... the two brothers soon became known as a pair of expert alpinists.

With Fritz Hassenöhrl, Smoluchowski not only shared a love of physics (Hassenöhrl also became a physics professor) but also a love of climbing and a love of music.

In 1890 Smoluchowski graduated from the Collegium Theresianum, being awarded his certificate with distinction, and entered the University of Vienna to study physics. There he was taught by Josef Stefan, who was nearing the end of his career, Emil Weyr and Franz Exner. He published his first paper on the internal damping of liquids in 1893 and was awarded his doctorate (with the highest distinction) in 1895 for his thesis Acoustical studies of elasticity of soft materials. An important influence on Smoluchowski was Boltzmann who moved back to Vienna in 1894 to the chair of theoretical physics which became vacant on the death of his teacher Josef Stefan. We should note here that during 1894-95 Smoluchowski had to spend time doing military service.

Smoluchowski spent the two years studying abroad following the award of his doctorate. From November 1895 to July 1896 he undertook research on heat radiation in Paris at the laboratory of Gabriel Lippman at the Sorbonne. He spent the summer of 1896 in England, at Eastbourne and London then, from September 1896 to April 1897, he was in Glasgow undertaking research on X-rays and uranium radiation in the laboratory of William Thomson (Lord Kelvin). Leaving Glasgow, Smoluchowski then spent four months undertaking research in Berlin at the laboratory of Emil Warburg where he discovered the temperature discontinuity in rarefied gases. In 1898 he became a privatdozent at the University of Vienna but a year later he accepted a position as a privatdozent at the University of Lvov. Promoted to extraordinary professor there in 1900, he married Zofia Baraniecka on 1 June 1901. They had two children, a daughter Aldona, born in 1902, and a son Roman born in 1910. Smoluchowski was promoted to full professor of physics at Lvov in 1903. He taught a variety of courses: potential theory, mechanics, electricity, optics, thermodynamics, kinetic theory of gases, differential equations, and mathematical physics.

After spending the winter semester of 1905-06 at the Cavendish Laboratory in Cambridge, England, Smoluchowski was elected dean of the Faculty of Philosophy at Lvov, a post he held during the academic year 1906-07. He returned to Cambridge in 1912 when he was invited to lecture at the International Congress of Mathematicians held from 22 August to 28 August. In the following year he was appointed to the chair of experimental physics at the Jagellonian University of Kraków. The outbreak of World War I in 1914 severely disrupted his work [7]:-

... there was a food shortage and in the late summer of 1914 he and his family ... had to travel across the Carpathian mountains in a horse drawn carriage into Hungary and thence by train to Vienna. As an Austrian reserve officer he was drafted and put in command of an artillery detachment which guarded an important railway bridge between Vienna and Kraków. One of his tasks at this time was to censor all mail written by his soldiers and he was deeply moved by the family problems and human misery that the letters revealed. Within a few months he was permitted to return to Vienna where he was received enthusiastically at the university. In spite of this in a year or so he returned to Kraków and continued his work.

Several universities attempted to entice him to leave Kraków. Both Warsaw and Vienna made moves but he remained in Kraków. To show their appreciation, the Jagellonian University of Kraków elected him rector in 1917 but he was never able to take up his duties. He contracted dysentery during an epidemic in the summer of 1917 which led to his death at the age of 45. He had already served as Dean of the Faculty of Philosophy at Jagellonian University during 1916-17.

Smoluchowski made many contributions to physics and mathematics, particularly to the theory of Brownian motion, stochastic processes and related problems, of which the most important are the 'Smoluchowski equations' bearing his name. At Lvov he found the theoretical explanation of Brownian motion, the piece of work for which today he is best known. Einstein independently proposed a theory of Brownian motions at roughly the same time. This theory marks the start of the study of stochastic processes in mathematics. In 1908 he proposed his theory of critical opalescence which explains the fluctuations in the refractive index of a fluid, liquid or gas. Smoluchowski devoted his life to his scientific work making a very deliberate decision. He wrote in a letter in 1915:-

I renounced a long time ago all kind of social, political and national activities. It was just after graduation when I decided, that science would be a leading star of my life. This is the basic rule of my life, to which I will be faithful and which is above any other aspect of my life.

Smoluchowski received many honours both for his scientific achievements and as an alpinist. Of course dying at the age of 45 meant that he would have received a much longer list of honours had he lived a full life span. He was awarded an honorary doctorate by the University of Glasgow in 1901, awarded the Haitnger's prize of the Vienna Academy of Sciences for his theoretical explanation of Brownian motion in 1908, was Wolfskehl Foundation lecturer at Göttingen in 1913 and again in 1916, and was awarded the Silber Edelweiss by the German and Austrian Alpine Society in 1916. He was elected a Corresponding member of the Academy of Sciences and Letters in Kraków in 1908, becoming a full member in 1917. He was also a member of the Copernicus Society of Natural Scientists in Lvov, being a member of the board for twelve years from 1900, and President of the Society in 1906-08.

Finally let us quote from Smoluchowski himself regarding his interest in climbing. He wrote to his alpine club:-

There are three most valuable things which I get from the mountains:

1. get used to undertaking difficult tasks,
2. get happiness from overcoming the challenges,
3. They embellish my everyday life with the loftiest poetry: the poetry of the world of mountains.

Other Mathematicians born in Austria
A Poster of Marian Smoluchowski

Other websites about Marian Smoluchowski: