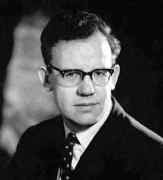 Keith Stewartson's father George was a master baker in Billingham, County Durham, and it was in this town that Keith was brought up. He was the youngest of his parents' three children, having one older brother Roy and a sister who died while Keith was too young to remember her. He did not get off to the most promising start in terms of his education, for at the age of eleven he failed the examinations at the end of his primary schooling. Put on a reserve list for entry to Stockton Secondary School, he was fortunate to be selected despite having failed the examinations.

At Stockton Secondary School he performed brilliantly but World War II started before he had completed his school education. His outstanding performance was rewarded with the award of a State Scholarship and a Kitchener Memorial Scholarship to Catharine's College, Cambridge, where his brother Roy had taken an engineering degree. Soon after this their family home suffered a direct hit during a bombing raid, but they had been given sufficient warning to seek protection in their air-raid shelter which was strong enough to let all the family survive, if somewhat shaken by their experiences.

Stewartson was an undergraduate at St Catharine's College, entering in 1942, but by that time special regulations for the Mathematical Tripos had been introduced because of the War. As a result Stewartson completed Part II of the Tripos in two years, receiving the Drury Prize for his outstanding work. It was in 1943 that Stewartson had attended a lecture given at Cambridge by Brodetsky on Aeronautical mathematics. It made a lasting impression on him. He then undertook War service with the Ministry of Aircraft Production, working first at the experimental firing and bombing range at Orford Ness on the Suffolk coast. The Bomb Ballistics Building there had been built in 1933 and contained equipment to record the flight of bombs in order to improve their aerodynamics and to provide data for the production of the tables used to refine bomb aiming. By the time Stewartson arrived, however, activity at Orford Ness was on the decrease and after a while he was moved to the Guided Projectiles Establishment at Westcott, Buckinghamshire.

It was at Westcott that Stewartson became involved in studying compressible fluid flow problems, and he worked there until 1946 when he returned to Cambridge. He now continued his Tripos studies taking Part III of the Tripos, which he completed with distinction, and was awarded the Mayhew Prize. He then undertook research, supervised by Leslie Howarth, on boundary layer theory. The results Stewartson obtained were impressive, and he published his first paper Correlated incompressible and compressible boundary layers in the Proceedings of the Royal Society in 1949. This work:-

Stewartson found time while working for his doctorate to become enthusiastic about rowing. He was a member of the College Eight and it became a serious commitment. He received a doctorate in 1949 for his impressive contributions to boundary layer theory and, following the award, was appointed Lecturer in Mathematics at Bristol. This was the same year that his research supervisor at Cambridge, Leslie Howarth, was appointed to the Chair of Applied Mathematics at Bristol. After teaching at Bristol for a year, he took his summer holidays in Austria in 1950 and there met Jean Forrester who was a physical education teacher. They were married in 1953 and had two sons and a daughter. Shortly after the marriage, Keith and Jean Stewartson set sail for the United States where they spent a year at the California Institute of Technology. This was the first of many visits which Stewartson made to the United States, Israel, and Australia. When he returned to Bristol in 1954, he was promoted to Reader in Mathematics.

His commitment to his College Eight at St Catharine's was translated into a major coaching effort to make Bristol the leading provincial university for rowing. He selected a new Bristol crew and expected a lot of them in training and for three years he gave a great deal of his time, energy, and determination to the task. By 1953 he had reached his goal when the Bristol Eight won the Universities Championship. He knew, however, that he would move on from Bristol, and he brought in the right man to succeed him as rowing coach.

In 1958 Stewartson was appointed to a chair at the new Durham Colleges division of University of Durham. Lighthill, in [4], writes of Stewartson's time in Durham:-

In the countryside around Durham, Keith and Jean were able to pursue their great love of upland walks as well as being athletically active in tennis mixed doubles (usually on opposite sides!) and in many other ways. But artistic pursuits were not neglected, and Keith found great pleasure in playing the works of his favourite composers (Mozart, Beethoven, Schubert) on his fine baby-grand piano.

In 1963 Stewartson and Lighthill played major roles in the founding of the Institute of Mathematics and its Applications. It formally existed from April 1964 with Lighthill as President and Stewartson as Vice-President, and Stewartson played a large role in setting the direction for the new body.

However Durham was not proving ideally suited to Stewartson's personality [7]:-

At that time the Durham Colleges division was small and conservative, with a limited tradition in applied mathematics, and consequently a less than comfortable place for a man of Stewartson's drive and ambition.

Given the situation in Durham, it was natural that he should look for other possibilities and his move to the Goldsmid Chair in University College, London in 1964 was the consequence. He spoke on boundary layer theory, in particular flows at high Reynolds numbers, in his inaugural lecture in London. In London Stewartson made his home in Golders Green. The family were happy living in the city, and Stewartson was able to indulge his love of the theatre and of opera.

Stewartson studied rotating fluid flows, shear layers, magnetohydrodynamics, the triple-deck theory, and flow at both high and low Reynolds numbers. As stated in [1]:-

Keith Stewartson's abiding passion in mathematical research lay in the solution of the equations governing the motion of liquids and gases, and in the comparison of his theoretical predictions with experiment and observation.

His work on separation of the boundary layer was summarised in the Von Neumann lecture he gave to the American Society for Industrial and Applied Mathematics in 1980. Here is his own summary taken from the published version of his talk:-

Since classical inviscid theory leads to the patently absurd conclusion that the resistance experienced by a rigid body moving through a fluid with uniform velocity is zero, great efforts have been made during the last hundred or so years to propose alternate theories and to explain how a vanishingly small frictional force in the fluid can nevertheless have a significant effect on the flow properties. The methods used are a combination of experimental observation, computation often on a very large scale, and analysis of the structure of the asymptotic form of the solution as the friction tends to zero. This three-pronged attack has achieved considerable success, especially during the last ten years, so that now the paradox may be regarded as largely resolved. We review these achievements in subsonic and supersonic flow, for bluff bodies, for trailing-edge flows and for internal flows. Most of the work has been on steady two-dimensional problems but the special difficulties in unsteady and three-dimensional flow are also touched on.

His output was large, with 186 papers. He was quick to recognise the importance of computers. In [7] Riley writes:-

... he recognised the value of the computer, and the impact that it would make on his subject, at an early stage. For him computational methods were a complement to analytic techniques. They could be used to help verify a delicate analytical structure ..., or even suggest the analytic structure ... Alternatively they could reveal unexpected phenomena which would then be subjected to analysis.

Stewartson received many honours. He was elected a Fellow of the Royal Society of London on 18 March 1965. Four years later he was awarded an honorary degree by the University of East Anglia.

In [1] Stewartson is compared with Thomson, Rayleigh and Stokes. Others have compared him with Euler. This is indeed praise but his international domination of his subject clearly makes him worthy of the comparisons.

His character is described in [1] as follows:-

The hospitality of Stewartson and his wife was legendary, and his happy, generous personality, coupled with his staunch support of those conducting good research and teaching, made him one of the most widely loved and revered of mathematicians.

He was never less than generous to his collaborators, and to work with him was as stimulating an experience as it was profitable; those who did learned to respect his passion for fluid mechanics and applied mathematics, his industry and his mathematical power which, combined with an ability to see a problem from what might often appear to be an unorthodox point of view, made him a dominant international figure in his subject.

Stewartson first had a health problem in 1974 when he suffered a small heart attack. He made a good recovery from that and continued to undertake his research and duties as vigorously as before. He moved from Golders Green to a house in Hampstead Garden Suburb in 1979. It was nine years after his first heart attack, in April 1983, that he suffered a second. He was on a very demanding tour of the West Coast of the United States at the time. He was flown home and taken to University College Hospital. For two weeks it looked as though he would again make a good recovery but, sadly, while in the hospital he suffered a third heart attack from which he died.

This premature death, at the age of 57, of one of the century's greatest exponents of the application of advanced mathematical methods in fluid mechanics produced worldwide grief and dismay, and applied mathematicians everywhere joined with the family in mourning Keith Stewartson as a warmly loved, as well as an intensely admired and respected figure.

Other pages about Keith Stewartson:

Other websites about Keith Stewartson: