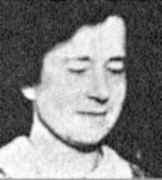 Dorothy Wrinch's parents were Ada Minnie Souter and Hugh Edward Hart Wrinch, who was an engineer. Although Dorothy was born in Argentina, Ada and Hugh were British and they returned to Surbiton, which is 19 km southwest of central London, where Dorothy was brought up. She attended Surbiton High School and while there she won a scholarship to attend Girton College, Cambridge University. She matriculated at Girton in 1913 and there she studied mathematics and philosophy. She was much influenced by Russell who had been appointed as a lecturer at Cambridge three years before Wrinch began to study there. The two became friends and Russell's ideas on mathematical logic were a major influence on Wrinch throughout her career. Also at Cambridge she attended lectures by W E Johnson on logic. Clearly these lectures made a considerable impression on her forshe published papers in 1919 and 1921 along similar lines of probability as a logical relation of a conclusion to premises. She graduated in 1916 as a Wrangler in mathematics, meaning that she obtained a First Class degree.

Wrinch remained at Cambridge undertaking research in mathematics until 1918 when she moved to University College in London. She lectured in mathematics at University College while working for her M.Sc. and then D.Sc. in mathematics. The master's degree was awarded in 1920, the year in which she returned to Girton to take up a research fellowship in mathematics. She was awarded her D.Sc. by University College while undertajing research at Girton. In 1922 she married John William Nicholson who was the director of mathematics and physics at Balliol College, Oxford; they had one child, a daughter Pamela born in 1927. After her marriage Wrinch moved to Oxford where she taught mathematics at different women's colleges. In 1927 she was appointed as a lecturer at Lady Margaret Hall, Oxford. Despite already having an M.Sc. and a D.Sc. from London, she worked at Oxford for these degrees again, and was awarded her second M.Sc. in 1924 and her second D.Sc. in 1929. This was the first Oxford award of a D.Sc. to a woman.

A measure of her research activity during this period is that from 1918 to 1932 Wrinch published twenty papers on pure and applied mathematics, and sixteen papers on scientific methodology and the philosophy of science. Sadly Wrinch's marriage became a difficult one as her husband turned increasingly towards alcohol. By 1930 things reached such a state that Wrinch and her husband separated and she brought up their child Pamela. Between 1931 and 1934 she was awarded a number of fellowships which enabled her broaden her scientific knowledge by studying physics, chemistry and biology at a number of the leading European universities. In particular she spent time at the universities in Vienna, Paris, Prague and Leiden. She then began to publish papers on the application of mathematical techniques to biochemistry. In particular she wrote five papers on chromosomes between 1934 and 1936 to which she applied potential theory.

This remarkable work led to Wrinch being awarded a Rockefeller Foundation fellowship to support her study of the application of mathematics to biological molecular structures. This fellowship allowed her to undertake a lecturing tour of universities in the United States where she put forward her theories, including a controversial idea of cyclol protein structure. This theory was based on ideas of mathematical symmetry. Although it was later shown to be incorrect for proteins, her theories were found to apply to chemical bonds which occur in some alkaloids. By 1939 the world was moving towards war and Wrinch offered to work for the British war effort. Her offer, however, was rejected and this led to her deciding to emigrate to the United States where she was appointed as a visiting lecturer in chemistry at Johns Hopkins University.

By the time that Wrinch had emigrated to the United States her marriage had been dissolved (this happened in 1938). While she was a visiting lecturer at Johns Hopkins she met Otto Charles Glaser who was vice president of Amherst College for men in Amhurst, Massachusetts. In 1941 she was appointed visiting professor at Amherst College and also at Smith College for women in Northampton, Massachusetts, and Mount Hoylake College for women in South Hadley Massachusetts. In the same year she married Glaser. Two years later, in 1943, she was appointed as research professor of physics at Smith College where, in 1965, she was awarded a Sophia Smith Fellowship. The Fellowship was named after Sophia Smith who was an heiress who left her fortune to establish Smith College, which was founded in 1871 and opened in 1875. Wrinch held the Fellowship until she retired in 1971 when she went to Woods Hole, Massachusetts.

After emigrating to the United States, Wrinch focused on the application of mathematical principles to the interpretation of X-ray crystallographic data of complex crystal structures. This work was set out in detail in her text Fourier Transforms and Structure Factors which was published in 1946. An interesting episode is related in [9]. Von Neumann wrote in a letter to Norbert Wiener, which is discussed in [9], that he would consult with Irving Langmuir and Wrinch regarding the possibility of using electronic computers to determine protein structure via X-ray crystallographic analysis. A meeting between von Neumann, Langmuir, Wrinch and A D Booth did indeed take place in Schenectady on Wednesday 16 April 1947. After discussions they decided (correctly it turned out) that computers would not give an immediate solution because of the difficult problem of determining phases.

Carey sums up Wrinch's contribution in [4]:-

By advancing a theory of protein structure that reached beyond the boundaries of classical biology to encompass chemistry, physics, mathematics, and philosophy, she contributed to the development of molecular biology by inspiring other scientists to take a multidisciplinary approach to the study of life.

Other Mathematicians born in Argentina
A Poster of Dorothy Wrinch

Other websites about Dorothy Wrinch: