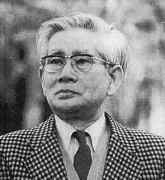 Kentaro Yano's father was a sculptor. Kentaro explains in [4] that the direction his research would take was actually a consequence of a visit by Einstein to Japan when he was ten years old, in the fifth class of primary school in Tokyo. Everyone in Japan was saying that the theory of relativity was so difficult that only twelve people in the world could understand it. However, Kentaro's father said to him:-

After completing his secondary education, Yano took the entrance examinations for the University of Tokyo in 1931. He entered the university and, together with some fellow students who also were keen to learn about differential geometry and Riemannian geometry, he studied some of the major texts such as those by Schouten, Weyl, Eisenhart, Levi-Civita and Cartan. After completing his undergraduate studies in 1934, Yano began to undertake research in differential geometry at the University of Tokyo. He read widely on the topic and decided that the ideas of Élie Cartan attracted him most. He therefore decided to go to Paris to study with Cartan and began to work for one of three science scholarships which were awarded for Japanese students each year to study for two years in France.

He set out from Tokyo on a journey to Paris which took around 30 days by boat and train. He was in Paris for the start of the academic year 1936. S S Chern had also gone to Paris at the same time to work with Cartan. He writes about Yano at this time in [3]:-

One could not fail to notice Yano's capacity for hard work. The library of the Institute was at that time a big room walled by bookshelves with tables in the middle. Yano's presence almost equalled that of the librarian. We were both working on "projective connections". he was writing his thesis ...

Yano returned to Tokyo in 1938 where he worked at the Tokyo Institute of Technology. He remained on the staff at the Institute for the whole of his career but made many trips abroad and spent long periods in other universities. We shall indicate below details of some of these visits.

Of course World War II started in the year following Yano's return to Tokyo from Paris and during the war years of 1939-45 Yano was isolated from most mathematicians. After the war, he wrote a book Geometry of Connections in Japanese which was published in 1947. A Kawaguchi writes:-

The author says in the preface that the chief purpose of this book is to explain E Cartan's geometrical interpretation of the concept "connection," as plainly as possible and to make clear its relations to other new differential geometries. The book is written very clearly and simply and avoids concepts that may be difficult for beginners to understand. It is not intended as a treatise for the expert, but the reviewer believes it to be one of the best for the beginner in the geometry of connections.

In 1949 Yano published an English monograph Groups of Transformations in Generalized Spaces which described the work on Lie derivatives and groups of transformations which he had studied during World War II. He soon learnt of the methods concerning curvature and Betti numbers developed by Bochner at Princeton during the war years. Yano wanted to learn of these methods so that he could study global differential geometry rather than the local version he had been studying up to that time. He was able to go to Princeton as Veblen's assistant and spent a very profitable time there. Not only was he able to attend the International Congress of Mathematicians in Harvard in 1950 but he was also able to publish papers on curvature and Betti numbers. Bochner suggested to Yano that he write up all the known results on this topic and this resulted in the joint publication of the monograph Curvature and Betti numbers published by Princeton University Press in 1953.

While in the United States, Yano received an invitation to teach at the University of Rome and to attend the International Congress on Differential Geometry in Italy in 1953. He attended the Congress, then made visits to Paris, Durham, Leeds, Southampton, Amsterdam, Leiden and Marseilles before returning to Rome to gave a lecture course at the Istituto nazionale di Alta Matematica. Although he lectured in French, his lectures were translated into Italian and published as Gruppi di trasformazioni in spazi geometrici differenziali by the Istituto Matematico in Rome. In the following year Yano attended the International Congress of Mathematicians in Amsterdam in September 1954, then spent six months as a visiting professor at the the Mathematical Centre in Amsterdam. Here he collaborated with J A Schouten and they published four joint papers on almost complex manifolds and the Nijenhuis tensor.

Yano participated in the American Mathematical Society meeting on Differential Geometry at the University of Washington in the summer of 1956. In the following year his book The theory of Lie derivatives and its applications was published. H C Wang writes:-

This is a comprehensive treatise of the theory of Lie derivatives. Using a unified method, the author establishes most of the known results on groups of local automorphisms of spaces with geometrical objects. When the space is compact Riemannian or compact pseudo-Kählerian, global properties are also discussed. The proofs are given in detail, and the presentation is clear.

He then spent three months at the University of Southampton in 1958. Being in the UK it was easy for him to attend the International Congress of Mathematicians in Edinburgh which was held in that year. In 1960 he spent six months in Hong Kong as a visiting professor and his lectures there were later written up and published as Differential geometry on complex and almost complex spaces (1965). Although the book is self-contained it continues to develop the material treated in Yano's earlier books Curvature and Betti numbers and Theory of Lie derivatives and its applications.

In 1972 Yano retired from the Tokyo Institute of Technology. The book Differential geometry in honour of Kentaro Yano was published for his retirement. Here is an extract from the Preface:-

This book is a collection of papers in differential geometry contributed by friends, colleagues and former students of Professor Kentaro Yano to celebrate his sixtieth birthday and in observance of his retirement from his position as Dean of Science at Tokyo Institute of Technology. To gauge the magnitude of his contribution to differential geometry, it suffices to recall his mathematical work, extending over the past four decades, which covers such diverse areas of geometry as affine, projective and conformal connections, geometry of Hermitian and Kählerian manifolds, holonomy groups, automorphism groups of geometric structures, harmonic integrals, tangent and cotangent bundles, submanifolds, and integral formulas in Riemannian geometry. His work has exercised great influence on geometers both in this country and abroad. Thus it is very fitting to dedicate this volume to Professor Yano as a token of our esteem and friendship.

Of course Yano's research did not slacken when he retired, nor did his many trips abroad. For example in 1973 he attended the American Mathematical Society meeting at Stanford University from 30 July to 17 August. He was in Korea for the Symposium on Differential Geometry at Seoul and Kyunpook Universities from 14 to 18 September, then he was in Rome to celebrate the 100th birthday of Levi-Civita at the Accademia Nazionale dei Lincei in December. In 1978 he was in Helsinki for the International Congress, then in the following year he was at the Symposium held at the University of California, Berkeley, to celebrate the retirement of S S Chern. Yano was back in Berkeley in 1980 for the International Congress of Mathematical Education held in August of that year.

The purpose of this book is to provide an introduction to the theory of various differential-geometric structures on manifolds and to gather and organize the results on submanifolds of Riemannian manifolds and of Kählerian manifolds with such structures. ... the authors have done a very good job of organizing many important results in one place. The book is well written. It should be a very valuable addition to libraries.

Almost every review of one of Yano's books contains a variant on the statement:-

The book is well written and carefully organized.

We end our biography with these words which typify the remarkable contributions of an outstanding mathematician.
Other Mathematicians born in Japan

Other websites about Kentaro Yano: