Born
10 October 1891
Lanton, Jedburgh, Roxburghshire, Scotland
Died
20 July 1968
Edinburgh, Scotland
Summary
Andrew Young graduated from Edinburgh and taught at St Andrews and London Universities. He then trained as a lawyer and worked as a solicitor in Edinburgh for the rest of his career. 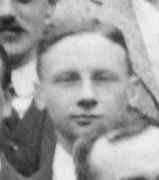 Andrew Young's father was Thomas Young, a schoolmaster at Lanton, Roxburghshire. Andrew was educated at Townshead Public School, Montrose, where he spent trhree months, Broughton Public School, Edinburgh, where he spent two and a half years, then at George Watson's College, Edinburgh where he spent seven years. He showed his outstanding abilities at George Watson's. He passed the Leaving Certificate examinations at Higher level in English, Latin, Greek, and Mathematics in 1907.

Young was appointed a Lecturer at the University of St Andrews in 1914 and then he moved to the University of London, again as a lecturer. In 1919, Young left the academic world and became the representative in Bremen, Germany, of Messrs S M Bulley & Son, Cotton Merchants of Liverpool. This major change in career was not the only one which Young made for, in 1926, he decided to change again, this time taking up law. He returned to the University of Edinburgh, now 35 years of age, and studied law. He graduated LL.B. in March 1929 and became a Writer to the Signet later the same year serving as an apprentice to E M Wedderburn and R F Shepherd. He then accepted a partnership in the firm of Messrs J & R A Robertson, Writers to the Signet.

In December 1913 Young joined the Edinburgh Mathematical Society. At that time he was about to embark on an academic career as a mathematician. He read the paper On the quasi-periodic solutions of Mathieu's differential equation to the Society at its meeting on Friday 13 February 1914. In January 1915 he was appointed joint editor of Proceedings in place of D M Y Sommerville, who had been appointed Professor of Mathematics in Victoria University College, Wellington, New Zealand. However, he remained a member through the various stages in his career, while he worked in Bremen, Germany, and after he returned to Edinburgh.

Young was elected to the Royal Society of Edinburgh on 1 March 1937, his proposers being Charles H O'Donoghue, Alexander Craig Aitken, Sir Ernest M Wedderburn,Sir Edmund T Whittaker. He served the Society in various capacities; as a Councillor from 1942 to 1945, as Treasurer from 1947 to 1957, and as Vice-President from 1958 to 1960.

An obituary, written anonymously, appears in the Royal Society of Edinburgh Year Book 1970, pages 53-54.
We give a version of this obituary at THIS LINK.

Andrew Young married Margaret Macgregor in 1920.
Other Mathematicians born in Scotland
A Poster of Andrew Young

Other pages about Andrew Young: