Previous Page
(1850 to 1868)
Contents
Next Page
(1871 to 1883)
When Sofia was eighteen the family moved to Petersburg to further educate her and her brother. Here she continued to study under Strannoliubsky. He was just twenty-seven when he first started tutoring Sofia. In their time together they covered topics rapidly and her unusual aptitude for the subject spurred him into attempting to further the movement for women's education. Convinced by this young lady's abilities he went on take an active role in organising gymnasium schools for women and helping to raise the money necessary to maintain them. 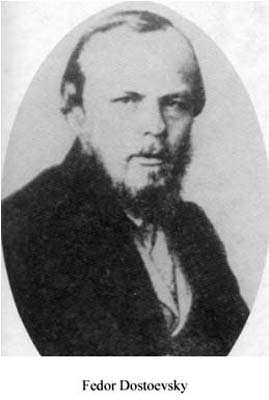 During this time Sofia's elder sister Aniuta was growing and maturing. The friendships she had developed with a number of young men during this time helped to bring her into contact with new political ideas and she took an interest in many of these, ordering books so that she could understand them further. Aniuta developed what would be a lifelong friendship with the great novelist Fedor Dostoevsky (see right). She sent many letters to him and impressed by her writing he replied. Dostoevsky met Aniuta and would talk to her at length, while Sofia watched them taking in all that he said. He was very much older than Aniuta but he fell in love with her and proposed to her, only to be rejected. However, he recognised Aniuta's literary talents and encouraged her to pursue them further. This no doubt helped her to mature and also develop a friendship with her younger sister, in turn helping to plant new ideas into the young girl's mind.

Having spent time studying with Strannoliubsky, it became clear that Sofia was ready for a wider education. Sofia wanted to take her study further, looking to enrol in university to study mathematics, but as a young woman she needed her father's permission to travel. Unfortunately Russian universities were closed to women at the time, as indeed were most universities around the world. The general argument against the academic training of women was that a free choice of education would produce competitive and aggressive women, lacking the skills that would enable them to be refined in the home and in society. It wasn't that there hadn't been any debate previously. As early as 1697, Queen Anne had tried to open English universities to women, but was opposed by her advisers.

While Sofia's learning was blossoming her sister was becoming acquainted with many young women in nihilist circles and was beginning to entertain ideas of a university education herself, even though she had not received the formal training necessary to embark on one. With her tales of women entering nominal marriages in order to travel abroad and study, she gave Sofia some hope that she might be able to get the education she wanted. The plan formed that Aniuta would marry and then Sofia would be allowed to travel around chaperoned by her and her husband. The first attempt failed, with Aniuta's proposal being politely declined. As the girls became more deeply involved with nihilism, they met more people sympathetic to their cause. One such person was Maria Bokova, whom Sofia enlisted to help find a partner for Aniuta.

Maria found Vladimir Onufrievich Kovalevsky, who knew the standing of the Korvin-Krukovskys, and on this basis agreed to help Aniuta, even though they had never met. All did not go exactly as planned however and on their first meeting neither party was impressed with the other. Aniuta usually energetic and talkative was rather quiet and withdrawn, Sofia on the other hand was lively and conversational and it was also apparent that she was serious in her intent to learn. A few days later the news came that Vladimir would not marry Aniuta, due partly to the fact that she was so hesitant in accepting his offer and also that she lacked the courage to tell her father of her intentions to marry. Nevertheless, so impressed by her sister Vladimir expressed his wish to marry Sofia. This must have been a fantastic boost for Sofia's confidence after years of living in the shadow of Aniuta's beauty, she had actually been chosen above her.

This was not the complete solution to the problem though. It was still customary at the time for the older daughter to be married first, and they would need to persuade their father to permit Sofia's marriage. Vasily was diplomatic with Vladimir when he revealed his intentions, but made it clear that he would have to wait. Thinking that this would be enough to deter him Vasily considered the situation to be dealt with and in doing so underestimated his strong willed daughter. So intent was Sofia on leaving home and continuing with her studies that she decided to take firm action. She chose the evening of a dinner party at the house to make her move, she did not arrive at the table, leaving the message that she was busy preparing her wedding plans with Vladimir. In the company of his guests Vasily had no choice but to feign knowledge of this to prevent a scene, and by doing so he made a public blessing of the union that could not easily be retracted. Sofia was at last free to pursue her further education. The couple were eventually married on September 27th 1869 and had a blessing in a Russian Orthodox church. Three days after the wedding the Kovalevskys arrived in Petersburg.

Soon after arriving in Petersburg Sofia made acquaintance with a woman who had her own gynaecological practice and by this was inspired to take up medical studies herself, with the view to becoming a physician. She met with members of St Petersburg University to discuss attending lectures and it was agreed that she would be permitted, though it would be unofficial and she would not be able to obtain a degree from the university. She was heartened by her time at Petersburg and by the reaction of other students in the classes, there was no bad feeling towards the female students, their attendance not provoking any hostilities. Nevertheless, she was to grow tired of her studies, longing to concentrate on mathematics, so from Petersburg she headed to Vienna to investigate the possibilities of study there.

The feedback in Vienna was very positive and she was offered a place on the mathematics courses. However Sofia felt that the quality of the courses on offer could not match the quality of those at Heidelberg. So she went to Germany to investigate this further, leaving Vladimir behind in Austria in case she was unsuccessful. Arriving in Heidelberg, Sofia was disappointed to find that the University did not admit women and would not allow her to attend lectures, so from there she travelled to Berlin.

The initial reaction that she received on approaching the faculty in Berlin was very unwelcoming and it was made very clear that women no matter how gifted, were under no circumstances to be admitted. If anything this frosty reception gave the impression that Berlin was more backward in its attitudes than Heidelberg. However all was not lost, as while in Berlin Sofia was fortunate enough to meet Weierstrass, who was so impressed at how prepared the young woman was that he decided he would take her under his wing and give her personal tuition. Together they worked hard and she progressed very well, but Weierstrass did not consider the possibility of Sofia obtaining a doctorate, because as far as he knew she did not need to pursue a career because she was a married woman. When he discovered the truth behind Sofia's marriage he encouraged her to try and obtain a doctorate and helped her in her preparations.
Previous Page
(1850 to 1868)
Contents
Next Page
(1871 to 1883)