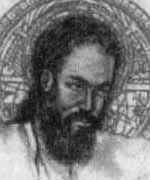 Details of Jamshid al-Kashi's life and works are better known than many others from this period although details of his life are sketchy. One of the reasons we is that he dated many of his works with the exact date on which they were completed, another reason is that a number of letters which he wrote to his father have survived and give fascinating information.

Al-Kashi was born in Kashan which lies in a desert at the eastern foot of the Central Iranian Range. At the time that al-Kashi was growing up Timur (often known as Tamburlaine) was conquering large regions. He had proclaimed himself sovereign and restorer of the Mongol empire at Samarkand in 1370 and, in 1383, Timur began his conquests in Persia with the capture of Herat. Timur died in 1405 and his empire was divided between his two sons, one of whom was Shah Rokh.

While Timur was undertaking his military campaigns, conditions were very difficult with widespread poverty. al-Kashi lived in poverty, like so many others at this time, and devoted himself to astronomy and mathematics while moving from town to town. Conditions improved markedly when Shah Rokh took over after his father's death. He brought economic prosperity to the region and strongly supported artistic and intellectual life. With the changing atmosphere, al-Kashi's life also improved markedly. The first event in al-Kashi's life which we can date accurately is his observation of an eclipse of the moon which he made in Kashan on 2 June 1406.

It is reasonable to assume that al-Kashi remained in Kashan where he worked on astronomical texts. He was certainly in his home town on 1 March 1407 when he completed Sullam Al-sama the text of which has survived. The full title of the work means The Stairway of Heaven, on Resolution of Difficulties Met by Predecessors in the Determination of Distances and Sizes (of the heavenly bodies). At this time it was necessary for scientists to obtain patronage from their kings, princes or rulers. Al-Kashi played this card to his advantage and brought himself into favour in the new era where patronage of the arts and sciences became popular. His Compendium of the Science of Astronomy written during 1410-11 was dedicated to one of the descendants of the ruling Timurid dynasty.

Samarkand, in Uzbekistan, is one of the oldest cities of Central Asia. The city became the capital of Timur's empire and Shah Rokh made his own son, Ulugh Beg, ruler of the city. Ulugh Beg, himself a great scientist, began to build the city into a great cultural centre. It was to Ulugh Beg that Al-Kashi dedicated his important book of astronomical tables Khaqani Zij which was based on the tables of Nasir al-Tusi. In the introduction al-Kashi says that without the support of Ulugh Beg he could not have been able to complete it. In this work there are trigonometric tables giving values of the sine function to four sexagesimal digits for each degree of argument with differences to be added for each minute. There are also tables which give transformations between different coordinate systems on the celestial sphere, in particular allowing ecliptic coordinates to be transformed into equatorial coordinates. See [14] for a detailed discussion of this work.

Al-Kashi had certainly found the right patron in Ulugh Beg since he founded a university for the study of theology and science at Samarkand in about 1420 and he sought out the best scientists to help with his project. Ulugh Beg invited Al-Kashi to join him at this school of learning in Samarkand, as well as around sixty other scientists including Qadi Zada. There is little doubt that al-Kashi was the leading astronomer and mathematician at Samarkand and he was called the second Ptolemy by an historian writing later in the same century.

Letters which al-Kashi wrote in Persian to his father, who lived in Kashan, have survived. These were written from Samarkand and give a wonderful description of the scientific life there. In 1424 Ulugh Beg began the construction of an observatory in Samarkand and, although the letters by al-Kashi are undated they were written at a time when construction of the observatory had begun. The contents of one of these letters has only recently been published, see [8].

In the letters al-Kashi praises the mathematical abilities of Ulugh Beg but of the other scientists in Samarkand, only Qadi Zada earned his respect. Ulugh Beg led scientific meetings where problems in astronomy were freely discussed. Usually these problems were too difficult for all except al-Kashi and Qadi Zada and on a couple of occasions only al-Kashi succeeded. It is clear that al-Kashi was the best scientist and closest collaborator of Ulugh Beg at Samarkand and, despite al-Kashi's ignorance of the correct court behaviour and lack of polished manners, he was highly respected by Ulugh Beg. After Al-Kashi's death, Ulugh Beg described him as (see for example [1]):-

... a remarkable scientist, one of the most famous in the world, who had a perfect command of the science of the ancients, who contributed to its development, and who could solve the most difficult problems.

Although al-Kashi had done some fine work before joining Ulugh Beg at Samarkand, his best work was done while in that city. He produced his Treatise on the Circumference in July 1424, a work in which he calculated 2π to nine sexagesimal places and translated this into sixteen decimal places. This was an achievement far beyond anything which had been obtained before, either by the ancient Greeks or by the Chinese (who achieved six decimal places in the 5th century). It would be almost 200 years before van Ceulen surpassed Al-Kashi's accuracy with 20 decimal places.

Al-Kashi's most impressive mathematical work was, however, The Key to Arithmetic which he completed on 2 March 1427. The work is a major text intended to be used in teaching students in Samarkand, in particular al-Kashi tries to give the necessary mathematics for those studying astronomy, surveying, architecture, accounting and trading. The authors of [1] describe the work as follows:-

In the richness of its contents and in the application of arithmetical and algebraic methods to the solution of various problems, including several geometric ones, and in the clarity and elegance of exposition, this voluminous textbook is one of the best in the whole of medieval literature; it attests to both the author's erudition and his pedagogical ability.

Dold-Samplonius has discussed several aspects of al-Kashi's Key to Arithmetic in [11], [12], and [13]. (see also [3]). For example the measurement of the muqarnas refers to a type of decoration used to hide the edges and joints in buildings such as mosques and palaces. The decoration resembles a stalactite and consists of three-dimensional polygons, some with plane surfaces, and some with curved surfaces. Al-Kashi uses decimal fractions in calculating the total surface area of types of muqarnas. The qubba is the dome of a funerary monument for a famous person. Al-Kashi finds good methods to approximate the surface area and the volume of the shell forming the dome of the qubba.

Rashed (see [5] or [6]) puts al-Kashi's important contribution into perspective. He shows that the main advances brought in by al-Kashi are:-
(1) The analogy between both systems of fractions; the sexagesimal and the decimal systems.
(2) The usage of decimal fractions no longer for approaching algebraic real numbers, but for real numbers such as π.
Rashed also writes (see [5] or [6]):-

... Al-Kashi can no longer be considered as the inventor of decimal fractions; it remains nonetheless, that in his exposition the mathematician, far from being a simple compiler, went one step beyond al-Samawal and represents an important dimension in the history of decimal fractions.

There are other major results in the work of al-Kashi which were pointed out by Luckey. He found that al-Kashi had an algorithm for calculating nth roots which was a special case of the methods given many centuries later by Ruffini and Horner. In later work Rashed shows (see for example [5] or [6]) that Al-Kashi was again describing methods which were present in the work of mathematicians of al-Karaji's school, in particular al-Samawal.

The last work by al-Kashi was The Treatise on the Chord and Sine which may have been unfinished at the time of his death and then completed by Qadi Zada. In this work al-Kashi computed sin 1° to the same accuracy as he had computed π in his earlier work. He also considered the equation associated with the problem of trisecting an angle, namely a cubic equation. He was not the first to look at approximate solutions to this equation since al-Biruni had worked on it earlier. However, the iterative method proposed by al-Kashi was [1]:-

... one of the best achievements in medieval algebra. ... But all these discoveries of al-Kashi's were long unknown in Europe and were studied only in the nineteenth and twentieth centuries by ... historians of science....

Other Mathematicians born in Iran
A Poster of al-Kashi