A history of Pi

A little known verse of the Bible reads

And he made a molten sea, ten cubits from the one brim to the other: it was round all about, and his height was five cubits: and a line of thirty cubits did compass it about. (I Kings 7, 23)

The same verse can be found in II Chronicles 4, 2. It occurs in a list of specifications for the great temple of Solomon, built around 950 BC and its interest here is that it gives π = 3. Not a very accurate value of course and not even very accurate in its day, for the Egyptian and Mesopotamian values of 825​=3.125 and √10 = 3.162 have been traced to much earlier dates: though in defence of Solomon's craftsmen it should be noted that the item being described seems to have been a very large brass casting, where a high degree of geometrical precision is neither possible nor necessary.

A suggestion of how this could be interpreted to lead to a much better value is at THIS LINK.

The fact that the ratio of the circumference to the diameter of a circle is constant has been known for so long that it is quite untraceable. The earliest values of π including the 'Biblical' value of 3, were almost certainly found by measurement. In the Egyptian Rhind Papyrus, which is dated about 1650 BC, there is good evidence for 4×(98​)2=3.16 as a value for π.

The first theoretical calculation seems to have been carried out by Archimedes of Syracuse (287-212 BC). He obtained the approximation
71223​<π<722​.
Before giving an indication of his proof, notice that very considerable sophistication involved in the use of inequalities here. Archimedes knew, what so many people to this day do not, that π does not equal 722​, and made no claim to have discovered the exact value. If we take his best estimate as the average of his two bounds we obtain 3.1418, an error of about 0.0002. 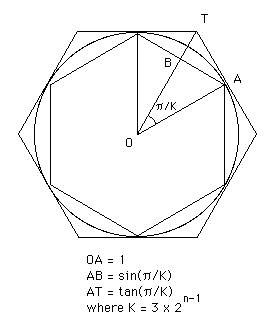 The diagram for the case n=2 is on the right.

The effect of this procedure is to define an increasing sequence

For of course there is no reason in principle why one should not go on. Various people did, including: Except for Zu Chongzhi, about whom next to nothing is known and who is very unlikely to have known about Archimedes' work, there was no theoretical progress involved in these improvements, only greater stamina in calculation. Notice how the lead, in this as in all scientific matters, passed from Europe to the East for the millennium 400 to 1400 AD.

Al-Khwarizmi lived in Baghdad, and incidentally gave his name to 'algorithm', while the words al jabr in the title of one of his books gave us the word 'algebra'. Al-Kashi lived still further east, in Samarkand, while Zu Chongzhi, one need hardly add, lived in China.

These are both dramatic and astonishing formulae, for the expressions on the right are completely arithmetical in character, while π arises in the first instance from geometry. They show the surprising results that infinite processes can achieve and point the way to the wonderful richness of modern mathematics.

With a formula like this available the only difficulty in computing π is the sheer boredom of continuing the calculation. Needless to say, a few people were silly enough to devote vast amounts of time and effort to this tedious and wholly useless pursuit. One of them, an Englishman named Shanks, used Machin's formula to calculate π to 707 places, publishing the results of many years of labour in 1873. Shanks has achieved immortality for a very curious reason which we shall explain in a moment.
Here is a summary of how the improvement went: A more detailed Chronology is available at THIS LINK .

Shanks knew that π was irrational since this had been proved in 1761 by Lambert. Shortly after Shanks' calculation it was shown by Lindemann that π is transcendental, that is, π is not the solution of any polynomial equation with integer coefficients. In fact this result of Lindemann showed that 'squaring the circle' is impossible. The transcendentality of π implies that there is no ruler and compass construction to construct a square equal in area to a given circle.

Very soon after Shanks' calculation a curious statistical freak was noticed by De Morgan, who found that in the last of 707 digits there was a suspicious shortage of 7's. He mentions this in his Budget of Paradoxes of 1872 and a curiosity it remained until 1945 when Ferguson discovered that Shanks had made an error in the 528th place, after which all his digits were wrong. In 1949 a computer was used to calculate π to 2000 places. In this and all subsequent computer expansions the number of 7's does not differ significantly from its expectation, and indeed the sequence of digits has so far passed all statistical tests for randomness.

We should say a little of how the notation π arose. Oughtred in 1647 used the symbol πd​ for the ratio of the diameter of a circle to its circumference. David Gregory (1697) used rπ​ for the ratio of the circumference of a circle to its radius. The first to use π with its present meaning was an Welsh mathematician William Jones in 1706 when he states "3.14159 etc. = π". Euler adopted the symbol in 1737 and it quickly became a standard notation.

There is more information about where the notation π came from at THIS LINK.

We conclude with one further statistical curiosity about the calculation of π, namely Buffon's needle experiment. If we have a uniform grid of parallel lines, unit distance apart and if we drop a needle of length k<1 on the grid, the probability that the needle falls across a line is 2k/π. Various people have tried to calculate π by throwing needles. The most remarkable result was that of Lazzerini (1901), who made 34080 tosses and got
π=113355​=3.1415929
which, incidentally, is the value found by Zu Chongzhi. This outcome is suspiciously good, and the game is given away by the strange number 34080 of tosses. Kendall and Moran comment that a good value can be obtained by stopping the experiment at an optimal moment. If you set in advance how many throws there are to be then this is a very inaccurate way of computing π. Kendall and Moran comment that you would do better to cut out a large circle of wood and use a tape measure to find its circumference and diameter.

Still on the theme of phoney experiments, Gridgeman, in a paper which pours scorn on Lazzerini and others, created some amusement by using a needle of carefully chosen length k = 0.7857, throwing it twice, and hitting a line once. His estimate for π was thus given by
2×π0.7857​=21​
from which he got the highly creditable value of π = 3.1428. He was not being serious!

It is almost unbelievable that a definition of π was used, at least as an excuse, for a racial attack on the eminent mathematician Edmund Landau in 1934. Landau had defined π in this textbook published in Göttingen in that year by the, now fairly usual, method of saying that π/2 is the value of x between 1 and 2 for which cosx vanishes. This unleashed an academic dispute which was to end in Landau's dismissal from his chair at Göttingen. Bieberbach, an eminent number theorist who disgraced himself by his racist views, explains the reasons for Landau's dismissal:-

Thus the valiant rejection by the Göttingen student body which a great mathematician, Edmund Landau, has experienced is due in the final analysis to the fact that the un-German style of this man in his research and teaching is unbearable to German feelings. A people who have perceived how members of another race are working to impose ideas foreign to its own must refuse teachers of an alien culture.

There are many of us, many Englishmen and many Germans, who said things during the War which we scarcely meant and are sorry to remember now. Anxiety for one's own position, dread of falling behind the rising torrent of folly, determination at all cost not to be outdone, may be natural if not particularly heroic excuses. Professor Bieberbach's reputation excludes such explanations of his utterances, and I find myself driven to the more uncharitable conclusion that he really believes them true.

Not only in Germany did π present problems. In the USA the value of π gave rise to heated political debate. In the State of Indiana in 1897 the House of Representatives unanimously passed a Bill introducing a new mathematical truth.

Be it enacted by the General Assembly of the State of Indiana: It has been found that a circular area is to the square on a line equal to the quadrant of the circumference, as the area of an equilateral rectangle is to the square of one side.
(Section I, House Bill No. 246, 1897)

The Senate of Indiana showed a little more sense and postponed indefinitely the adoption of the Act!

Open questions about the number π As a postscript, here is a mnemonic for the decimal expansion of π. Each successive digit is the number of letters in the corresponding word.
How I want a drink, alcoholic of course, after the heavy lectures involving quantum mechanics. All of thy geometry, Herr Planck, is fairly hard...:

Other pages about Pi history:

Other websites about Pi history: